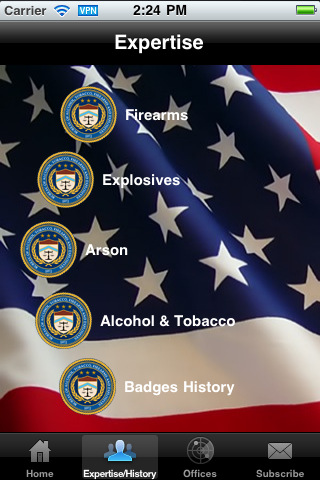 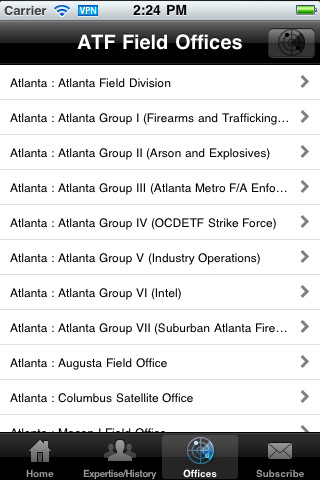 I stumbled across a press release on the ATF website announcing that they had update their iPhone app.The release said:

ATF Announces New Version of App for Apple iPhone and iPod Devices
WASHINGTON — The Bureau of Alcohol, Tobacco, Firearms and Explosives (ATF) today announced the latest release of its mobile application for Apple iPhone and iPod touch devices. With the ATF app, developed in cooperation with NIC Inc., users can learn about ATF history and areas of expertise, find their local ATF field office and sign up for e-mail updates on the latest ATF related news.

“ATF strives to use new technology to educate the public about its role in reducing firearms-related violence and making dangerous communities safe places to live,” said Scot Thomasson, chief of ATF Public Affairs Division. “Working with NIC in the development of this downloadable app, ATF hopes to reach a younger and more tech savvy portion of the population.”

It is almost sounds like some Saturday Night Live skit featuring Frank Sinatra singing the Beatles because “the kids like this stuff.”

Frankly, I wouldn’t be surprised if this app somehow could monitor my calls, surveil me while out shooting, or kill my dog. Now I know that sounds paranoid but ATF is one agency that I have a hard time trusting especially around canines.