This was originally posted on October 6, 2011. In honor of the 7th Circuit’s ruling in Shepard v. Madigan and Moore v. Madigan, I thought it would be useful to repost it. Sometime in the next 180 days or less, the percentage of US citizens in the “red zone” will decrease. This assumes, of course, that the State of Illinois does not appeal this ruling. Now it is up to the citizens of Illinois and their elected representatives as to whether or not they move to the yellow zone or the green zone. Here’s hoping for the green zone.

I have some of the best readers in the world. One such reader is Rob Vance of California. He works in the software industry and must analyze data on a regular basis. The graphic below is as a result of his sitting down and examining U.S. Census data alongside a state’s policy on discrete or concealed carry of firearms. 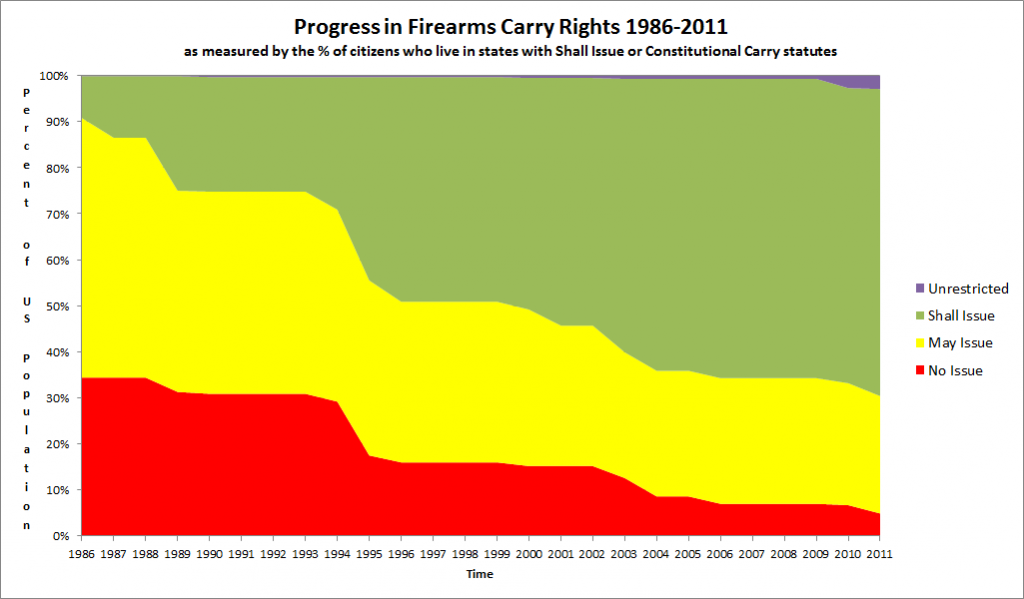 The data used to generate this graphic is available here in Google Documents. Unlike the gun prohibitionists, we publish our data for the world to see. With regard to the data and methodology, Rob had this to say:

The graph maps the change in the legal status of concealed carry permits by state over time based on data found at www.gun-nuttery.com/rtc.php and the US Census Bureau (percentage of total US population by state). Classification of carry rights status was divided into four groups 1) Unrestricted 2) Shall issue 3) May issue and 4) No issue.

A couple of things about the graph and the supporting data. For population values, I used census data. 1980 -> 2010. The annual values (percent of total population by state) are rolled forward – e.g. 1980 census for years 1980- 1989, and so on. With respect to the rounding error the effect of total error is limited to a couple of tenths of a percent.

If you examine the spreadsheet with the data values you will see that a may-issue state like Hawaii is classified as a No-issue state. While you could argue that Hawaii should be listed as may-issue or conversely a state like New Jersey should also be added to the No-issue list, it doesn’t change the trends shown.

As to the conclusions that you can draw from this graph and the data, Rob had this to say:

1) In the early 1980s 90% of Americans lived in states that actively suppressed self-defense rights by severely limiting concealed carry of firearms by citizens.

2) By 2010, 2/3’s of Americans lived in states where law abiding citizens could conceal carry if they met minimal standards, and in some states (4 by 2011) needed NO state permission at all to concealed carry. A total of 41 states are now shall-issue or have unrestricted concealed carry status.

3) Few states moved from no issue to may issue. Rather when states made policy changes, they made the jump from no-issue to shall-issue all at once (again, with a couple of exceptions).

4) 30% of the citizens in the US STILL live under state governments that are hostile to the interests of their citizens in self-defense as measured by access to shall-issue (or unrestricted) concealed carry.

5) We’re down to the hard cases now – states where politicians are deeply invested in denying armed self-defense to otherwise law abiding citizens. California, Illinois and New York are where the population numbers are in terms of resistance to 2nd Amendment rights (and yes, there are a few others like New Jersey, Massachusetts, Hawaii, etc.).

If I may add a couple of other things, I’d say that shall-issue is the new norm in 2011 as opposed to no-issue or severely restricted may-issue back in 1986. The other thing I would add is that the experience with shall-issue concealed carry in the early adopting states like Florida paved the way for its adoption elsewhere. That is, people applying for concealed carry licenses are law-abiding citizens who have taken the responsibility seriously. Unlike what the Violence Policy Center would have you believe, the streets are not running with blood nor have they.

I would like to thank Rob for taking the time and making the effort to put his together. It is great research and his efforts are much appreciated.

15 thoughts on “Every Picture Tells A Story (Repost)”