I had seen reports of record attendance at other gun shows but today I saw for myself. I attended the Asheville Gun and Knife Show held at the WNC Agriculture Center. I was struck by three things at the show: the crowds, the prices, and the level of commitment to fight for gun rights.

First, the crowds. I arrived at the Ag Center just a few minutes after 8am. I was at the show to volunteer at the Grass Roots North Carolina booth. Having volunteered for their booth at the previous gun show, I was shocked at the crowds and by how early people had started lining up. One person told me he got on line at 5:30 this morning after he got off of work!

The picture below is the line-up to get in just before the 9am opening. The line stretched down one lane, across to another, and then up again. When I left at 12:30pm, there was still a decent sized line to get into the gun show! 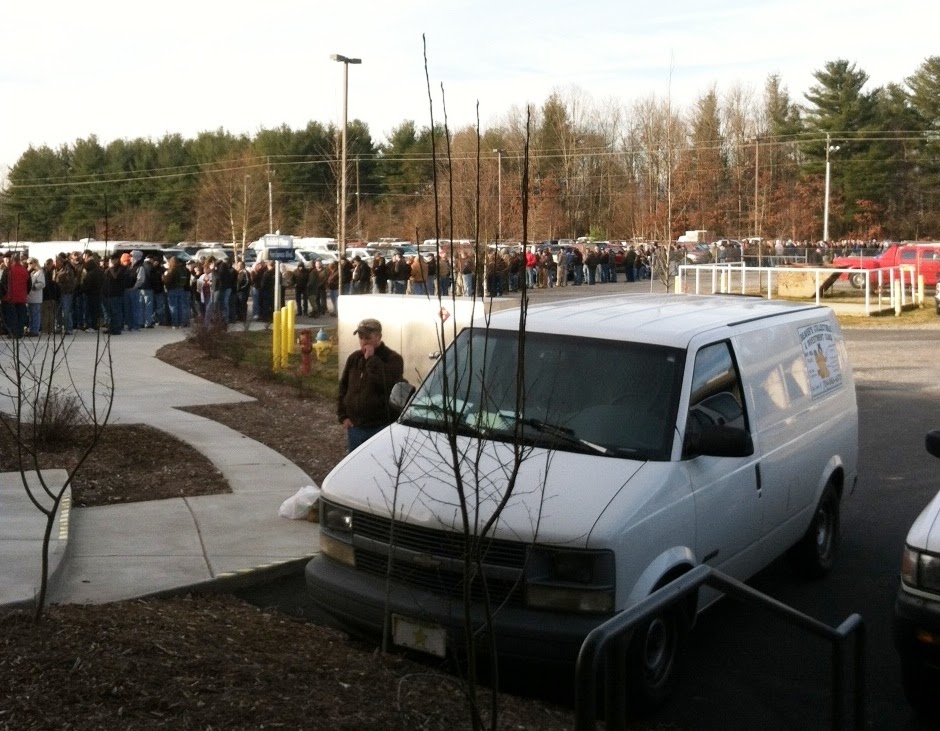 To put this into more perspective, here is a satellite map of the Ag Center with the red line representing the line to enter at 9am. The small red circle represents the entrance to the Davis Event Center. The building is 300 x 150 feet and has 45,000 square feet of exhibition space. 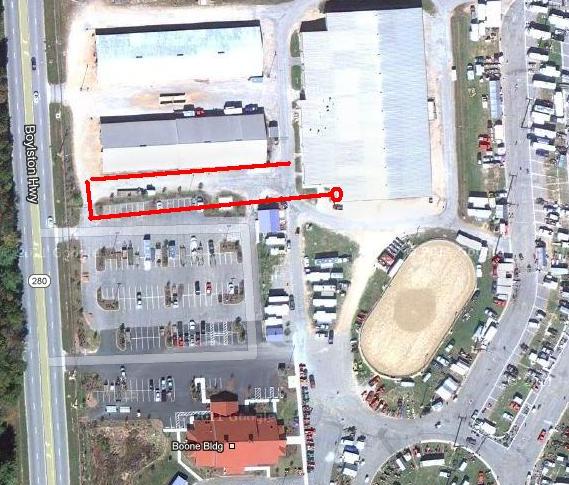 As you might well imagine, it got crowded inside. At first, it was just the outside perimeter but as time passed every row was filled with people 3 to 4 abreast. You couldn’t zip up and down the rows checking out stuff at your leisure. You pretty much either stopped or moved with the crowd. You can see in the picture below what I’m talking about. I wish I had an overhead picture to show just how crowded it was. 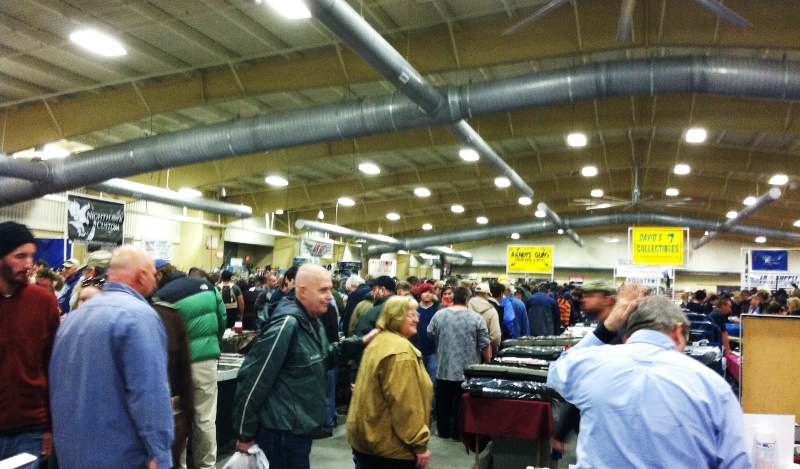 There are probably a number of reasons for the record attendance. First, with all the calls from politicians and the media for greater gun control there is the urge to buy it while you still can. Second, you have people like Asheville City Councilman Cecil Bothwell who are calling for gun shows to be banned in Asheville. While the Ag Center is not city-owned, Bothwell claims the land underneath is owned by the City of Asheville. Unfortunately for him, Session Law 2012-121 (HB 552) forced the City to cede title to the land underneath the Ag Center as well as remove any part of it from being within the city limits. Finally, it was the first gun show of the year and it was nice day.

Bob Owens asked me by Twitter whether they had any “fighting guns” left as he had reported none were available in his town. See Bob’s excellent post on the subject, “Something funny happened on the way to tyrrany.” He would be happy to know that you could find a number of AR-15s, some AKs, and a few odds and ends of other stuff. I noticed a handful of people selling their own ARs as well as stuff like FALs and Mini-14s.

As I said above, you could find AR-15s and AK-47s as well as magazines for them. However, the prices have sky-rocketed due to supply and demand. Plain jane AR-15s were selling for $1,500 and up. If you wanted an AR with all the bells and whistles (optics, rails, laser, bipod, etc.),  one dealer had them for $2,900. AKs had similar price jumps. I saw an AMD-65 which I had just purchased in September new selling for $439 selling for $1,000 used.

Magazine prices were outrageous. Used GI 30-round magazines were selling for $30. Strangely enough, they were selling new ones for the same price. The same dealer had Magpul PMAGs for $40 which were selling a month ago for $12.95. I did see Bulgarian AK-47 magazines for $30. It wasn’t just the dealers who were marking up prices on magazines. I did see one guy go by offering to sell Glock 17 and 22 magazines for $90 for two.

Not all prices were outrageous. I picked up two boxes of Hornady 6.8 SPC ammo for $20 each. Wolf primers were selling for $20 a box. Hunting stuff seemed price like it had been in the past. In terms of private sales,  I spoke with a young man selling his FN-FAL for $900 with scope and bipod which I found to be reasonable. If I didn’t have an FN-FAL and had an extra $900 hanging around, I would have bought it. Another guy had a pre-ban HK-91A1 for $3,500. While that may sound outrageous, it was the going rate before all the assault weapon (sic) ban talk started.

As I wrote earlier, I was volunteering for the Grass Roots North Carolina booth as I had at the last gun show. The difference was amazing even though the previous one had been just before the election. We signed up at least 10 new members by noon as compared to none the last time I was there. Secondly, people were very happy to sign GRNC’s petition to the North Carolina congressional delegation telling them they didn’t want any new gun control. We had 300 printed up and I’d estimate we had close to 250 signed by the time I left at noon. Those signing the petition were young and old, men and women, white and non-white. I spoke with people with nose rings and old men with canes. They were all similarly committed in their opposition to any new gun control.

Speaking with the people who stopped by the booth, I could tell they were ready to fight. I doubt any of them would voluntarily surrender their guns, magazines, or ammunition. Moreover, speaking with a former Force Recon Marine, he said he didn’t know any of his former colleagues who would enforce an order to confiscate firearms. He said they would rightfully consider it an unlawful order.

It was a good gun show except for the high prices on some things. However, I understand the laws of supply and demand. Moreover, the dealers selling now will have a hard time replenishing their stock for the next show. There will be a gun show in Waynesville at the end of the month. I may try to make that one just for comparison’s sake.

UPDATE: The gun show was covered by the local media.

Below is the video report from WSPA of Spartanburg, SC on the Asheville Gun and Knife Show. There were a lot of visitors from the Upstate of South Carolina at the show.

Reporters from the Asheville Citizen-Times also covered the show. Below is a video that they shot at the show which gives a good idea of how crowded it was. I love the comments by Phil Flack of PF Custom Guns regarding the so-called “gun show loophole.” You can read more of the story here which, unfortunately, goes overboard on “fairness” by soliciting comments from the gun prohibitionists.

7 thoughts on “A Visit To A Post-Newtown Gun Show”