The lead story on this morning’s CBS Sunday Morning was a report by Sharyl Attkisson about bribes and corruption within the US Customs and Border Protection. Narco-terrorists and illegal immigrant smugglers have been targeting CBP agents in an effort to have them turn a blind eye to smuggling of both drugs and humans. Since 2004, there have been 358 convictions of Customs and Border Patrol employees and their associates for this. Of course this is an important story and I’m glad Sharyl is on it.

However, that is not what I want to discuss. Instead it is a rather subtle reminder – intentional or unintentional – that was embedded in the story about Project Gunwalker. Just before a graphic came up showing the DHS Office of Inspector General’s report on the corruption convictions, the camera focused for approximately three seconds on the sign below. 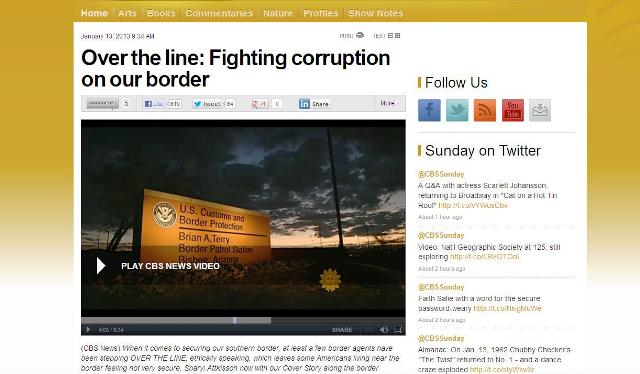 Sharyl and her producers could have used any Border Patrol Station between Imperial Beach, California and Brownsville, Texas or any Ports-of-Entry from San Ysidro, California to Brownsville, Texas. Rather they chose the one Border Patrol Station that would remind observant viewers of Operation Fast and Furious. I can’t believe this is just a coincidence.

As it is, the Brian A. Terry Border Patrol Station is a constant reminder that Border Patrol Agent Brian Terry was killed in the line of duty with firearms that were allowed to be smuggled to Mexico by the Department of Justice and its Bureau of Alcohol, Tobacco, Firearms, and Explosives. It is also a reminder that while his killers have pled guilty to his murder, the Obama Administration is still sitting on thousands upon thousands of documents that may well point to complicity in the operation by those at the highest levels of the Justice Department. Finally, it is a reminder that BATFE managers such as former Phoenix FD SAC Bill Newell and his ASAC George Gillett still haven’t been fired and/or indicted for their role in this affair.

Thank you Sharyl for this reminder lest we forget.