Today is Veterans Day. Up until 1954, it was known simply as Armistice Day. The change came about due to the efforts of WWII veteran Raymond Weeks who had the idea to celebrate all veterans and not just the veterans of WWI. Thus, I would like to give my thanks to all veterans, living and dead, for their service to our country.

Armistice Day which commemorates the end of WWI got me to thinking about my grandfathers. While neither served in WWI, I was able to find their draft cards.

My paternal grandfather, William Thomas Richardson, was a farmer and had four children when he registered for the draft in 1918. My father did not come along until 1919. 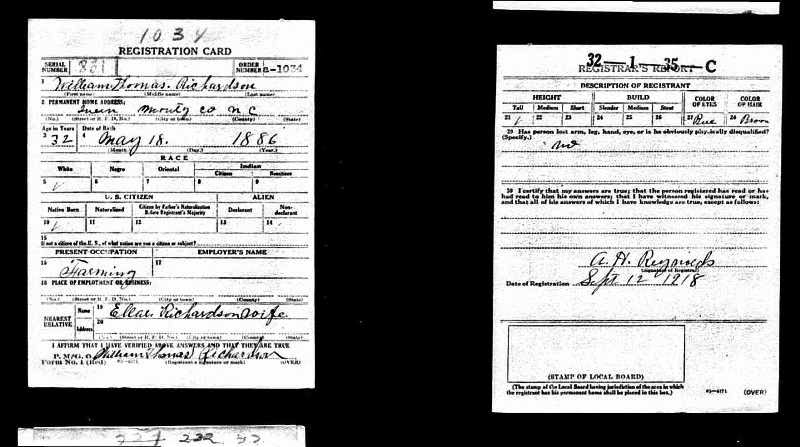 My maternal grandfather, John Francis Sheridan, was a tax assessor with the City of New York. He registered for the draft in 1917. He did not marry my grandmother until 1918 and my mother was born in 1919. My mother told me that he was always disappointed that he was turned down for service due to his eyesight. 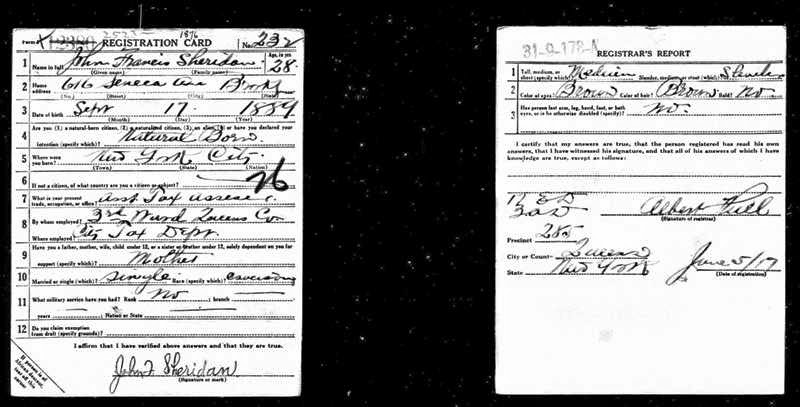 If you look at the lower left corner of my Grandfather Sheridan’s draft registration, you will see a tab that reads, “If person is of African descent, tear off this corner.” I find it interesting that this is on the card belonging to my grandfather residing in New York and not the one residing in North Carolina.

I found these on Ancestry.com. Today it is free to search their military records collection. They have draft cards from WWI and WWII as well as US Navy ship muster rolls. If you want to do more in-depth searching on an ancestor’s US military background, you can get records from the National Personnel Records Center, Military Personnel Records.