Skip to content
Uncategorized
FireClean is supposed to be a revolutionary gun lube that actually helps keep your gun clean, so saith the likes of Larry A. Vickers. However, if you’ve paid any attention to firearm forums and/or gun blogs over the last week or so, you’ve found out that this miracle product which Amazon has for $29.95 for a two pack of 2 oz. bottles isn’t quite so exotic as it would seem. Actually, it is just vegetable oil, specifically canola oil.
I’m not here to hash out this controversy but if I had some corned beef hash, I’d want eggs with it. Eggs cooked in oil.
Well maybe not FireClean gun oil but that is exactly what Karl and Ian have done. They fried up some eggs in FireClean and ate them. We all should thank them for taking one for the team in the name of science.
Uncategorized

Comedian Steven Crowder calls out gun controllers in this parody called “Rogue Guns”. I think one of the reasons that parody is such an effective political tool is that it is so close to the truth.

In this case, how many times have we heard the gun blamed rather than the person using it? The answer is much too often. A gun or a knife or even a Martha Stewart marble rolling pin are all tools until they are misused. 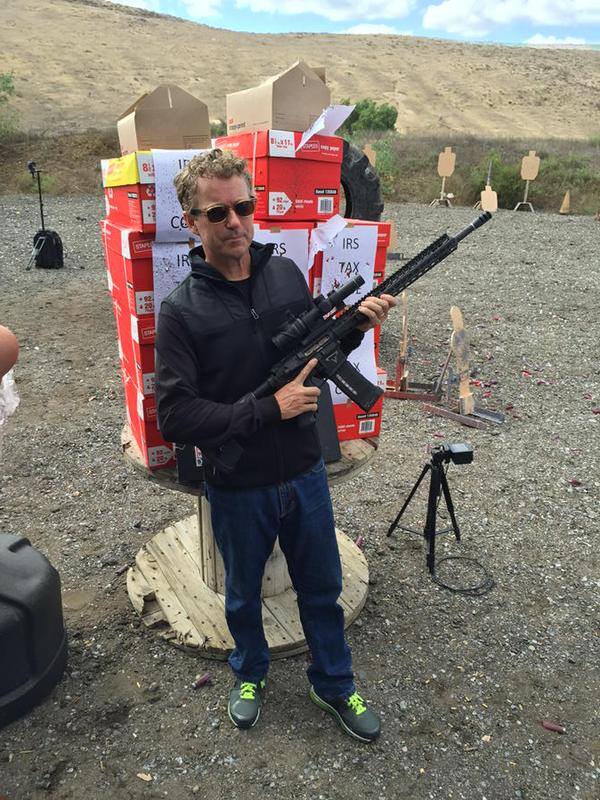 I only got the chance to meet Frank once. It was at an impromptu meeting of gun bloggers before the 2012 NRA Annual Meeting in St. Louis arranged by Jay G. I thought here was this legend sitting down to have a drink with us mere mortals. I honestly don’t remember what, if anything, we said to one another.

I’ll let those who know him much better take it from here.

Michael Bane has a remembrance here. Frank served as one of his experts on Gun Stories.

Tam, who knew him much better than me, has this to say.

Unfortunately, his earlier blog, Corn, Beans, Spent Brass, An Empty Page – And  A Deadline, is gone and the Wayback Machine archive doesn’t have it. I guess memories will just have to do.

UPDATE: Tom Gresham has posted an interview he did with Frank from 2010 as a remembrance of Frank.

This post has nothing to do with guns or money or lawyers. It just has to do with one of the best advertisements that I’ve ever seen in a long time. I thought it was the perfect something for a Monday morning. It brought a smile to my face and I’ve been up half the night hacking up a lung with some viral crud. If it can do that, it must be a pretty powerful ad.

I know you are shocked to hear that Shannon Watts lied on Twitter about a new NRA video that features Dana Loesch. Now it is no secret that no love is lost between these two. Dana has called out Shannon many a time for her lies and her use of no-neck armed guards hired by Michael Bloomberg.

Here are the tweets in question:

If you watch the video below, you never hear a thing about Christianity nor do you hear any encouragement of shooting a thug in the face. What Dana said is that the media buries stories of defensive gun uses by mothers. As to the “Leather Tuscadero” Happy Days reference, that is just Shannon Watts’ cattiness about Dana’s leather jacket and the effectiveness of this video.

The best response on Twitter was by someone named Tom Sawyer who just nailed it!

Shannon Watts of Everytown Moms for Illegal Mayors loves her corrupt politicians. At least the ones that are for more and more gun control while they have their own armed security details. She tweeted the pictures below of Hillary Clinton signing a “whatever it takes” poster yesterday.

Hillary probably thought she was signing a poster with her campaign motto.

If you are a dog owner, you know and fear parvo aka canine parvovirus. It attacks rapidly dividing cells in a dog’s body especially in the intestinal tract. This causes severe, often bloody, diarrhea in the dog and can be fatal. The virus also attacks white blood cells and can damage the heart. This is why it is so important to vaccinate all dogs and puppies against parvo.

With this little intro to canine health issues you can understand why my head shook when I read this release from Head Down Products. They make fairly decent rifles from what I understand. I’ve never shot one of their firearms before but that is the impression I had.

Dallas, GA – Head Down Products is proud to announce the Uncle Parvo line, a line of AR-15 rifles specifically designed for predator hunting applications and the specific needs of hunters.

While the value of the AR-15 platform is well known in the hunting world, quite often the AR-15 market leans toward the tactical/defense application and not the outdoorsman. Head Down Products is proud to change that.

The Uncle Parvo line of rifles are lightweight, tough and includes a modular rail featuring KeyMod™. This rifle features a 14.5″ barrel equipped with a mid-length gas system. The Uncle Parvo ships suppressor ready, with a Gemtech G5 QD/muzzle brake pinned for ATF compliance.

While it looks like a fine rifle, I wonder how many hunters, especially those that own dogs, are going to look at that name and say, “WTF?” I know I would.

The previous high had been set in August 2012. 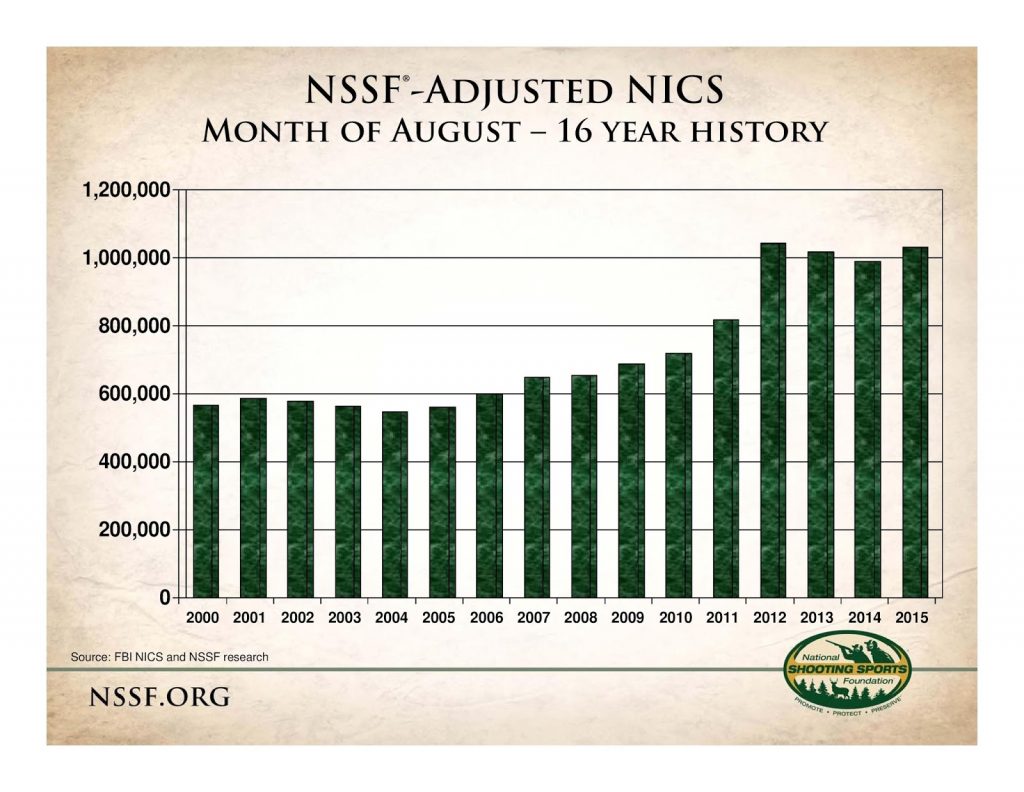 Looking back to 2012 to see what might have made it the highest month, I find stories regarding an AWB for Illinois, the George Zimmerman-Trayvon Martin case, and the UN’s Arms Trade Treaty. Project Gunwalker aka Operation Fast and Furious had finally started to make the news as well.

While August is traditionally one of the slower months, we are also starting to see a trend of year over prior year increases starting up again. 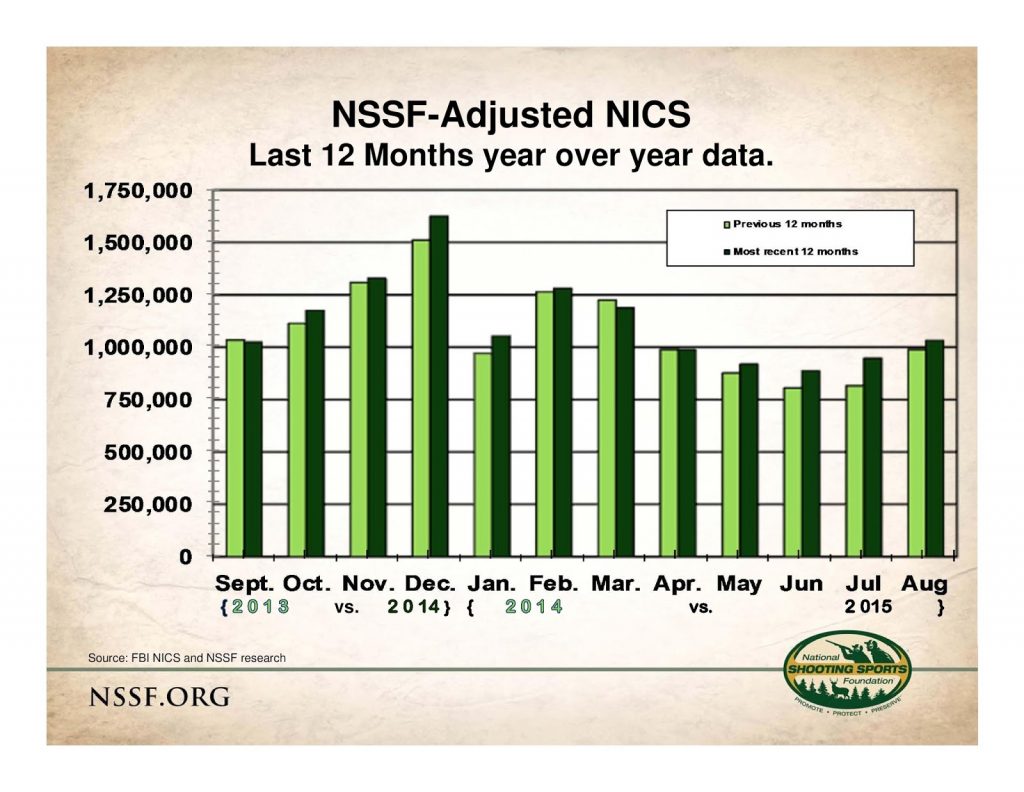 As always, it should be noted that NICS checks do not have a perfect correlation with sales. Many states use them for checking on concealed carry holders. Moreover, in many states such as North Carolina, a CCW takes the place of having to run a NICS check. However, as a general indicator of the direction of sales, the adjusted NICS checks are quite adequate.

I had heard Michael Bane make reference to the Ithaca Auto & Burglar shotgun pistol but had never seen one. Ian McCollum of Forgotten Weapons shows two examples of these any other weapons that are up for auction at Rock Island Auctions.

While these would have been a beast to handle in 12 gauge, in the lesser gauges like 20 or 28, I think they’d still provide more than adequate protection against highwaymen and carjackers.