Thanks to Yamil Sued, photographer extraordinaire, we now know just what Colt’s Manufacturing will be releasing for 2017. Yamil teased a post and then delivered  with a series of photos and videos soon after 12am EST this morning. I presume that is when the non-disclosure agreement expired.

As somewhat expected, Colt is re-releasing the Colt Cobra double action revolver. The specs are below: 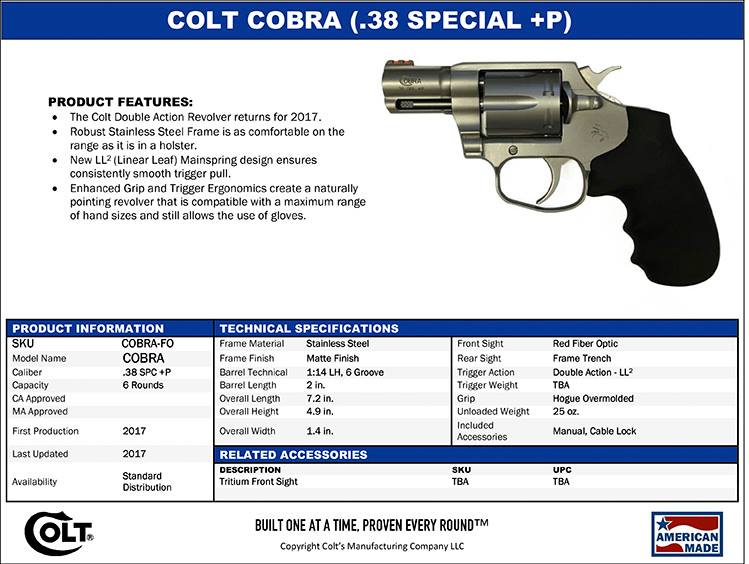 The new Cobra is a six-shot, 2 inch, stainless steel framed revolver with a fiber optic front sight and Hogue grips. Given that the Cobra is steel framed and not an aluminum alloy, the purist in me would suggest that it should have been called the Detective Special (5th Issue) and not the Cobra. In Facebook comments, it was suggested that Colt went with Cobra to keep the snake name alive for further revolver introductions.

Here is a better picture of the Cobra. Notice the difference in the trigger guard and trigger from the older Colts.

Yamil gives a review of the Cobra in this short YouTube video.

Elsewhere I heard mention that the pistol will sell for $699 MSRP. If it performs well, that is not a bad price. I really do hope that Colt will have this at the SHOT Show Range Day. I am especially interested in how the trigger performs compared to the old Colt trigger.