I have reported on the Possum Drop, a New Year’s Eve tradition for 24 years, in the small western North Carolina town of Brasstown a number of times. The event stuck in the craw of PETA and they sued the state a number of times to get it stopped. It took a change in state law to allow the beloved event to continue using a live opossum as opposed to either a stuffed animal or roadkill. 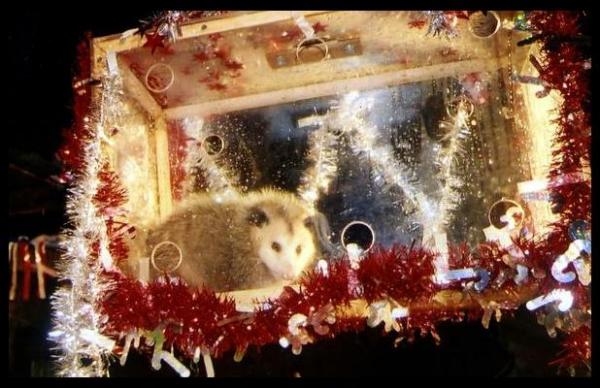 The event ended in Brasstown with last year’s New Years Eve when Clay Logan retired and closed his Clay’s Corner store. However, it has now been taken over as an event by the nearby Town of Andrews.

As reported by the Cherokee Scout newspaper:

The festivities start at 8 p.m. with live entertainment, including Steve Phillips and the Midnight Express as well as the High Country Harmonizers.


At 10 p.m., the possum will be escorted to the stage by the Andrews High School Marching Band. The event will continue with Logan hosting the traditional Possum Drop entertainment, including the Miss Possum Contest, a tribute to Americans serving in the military and surprise performances. The evening will conclude with the possum lowered in a Plexiglas cage to mark the new year and fireworks finale.


Just in case rainfall is too much for the grass field, there is a plan B. In that scenario, a stage will be built at the front of the pool, facing the parking lot where spectators will gather. Reid said this option would feel more like the former home of the event.


(Mayor James) Reid asked the committee for the minor change in location because he was concerned that the field at Heritage Park would be too muddy on New Year’s Eve. He didn’t want people to leave the night disappointed in the venue’s condition.


While the Town of Andrews plans to make the event its own, it still has Logan’s influence and guidance behind it. It will feature the fun traditions of live music, the Miss Possum contest and, of course, the possum carefully lowered in a cage to mark the new year.

Of course, PETA has their panties in a wad over the event as usual releasing this hyperbolic statement:

Andrews, North Carolina, apparently intends to celebrate New Year’s Eve by hosting a sadistic so-called “opossum drop,” during which a wild-caught opossum will be imprisoned inside a Plexiglas box for hours above a rowdy crowd. At midnight—after being forced to endure a near-constant barrage of live music, including a noisy marching band leading him in, and fireworks displays with the usual explosions and smoke—the terrified animal will be slowly lowered to signify the dawning of a new year. Because this sensitive and elusive prey species naturally avoids human contact at all costs, subjecting one of them to hordes of partiers, chaos, and loud noises is inhumane and would very likely result in a potentially fatal stress-induced condition.


PETA scheduled a meeting with Mayor James Reid to describe our concerns and to encourage city officials to “drop” any one of countless nonliving articles that wouldn’t suffer, but he canceled the meeting at the last minute, even declining to discuss the matter by phone—so now it’s your turn!

They are asking PETAfiles everywhere to call or write Mayor Reid to express their outrage.

Animal lovers can rest assured that the ‘possum will be well cared for as it will have a vet exam after capture, be monitored for stress, and be taken home after the event by a wildlife expert. As Town Administrator Bill Green notes, “It’s the best-cared-for possum.”

One thought on “The Possum Drop: A New Year’s Eve Tradition Lives On!”