“Social Distancing” seems to be the word of the year along with “flatten the curve”. All of this is due to the COVID-19 pandemic.

You go into many stores and you see “X” on the floor indicating just how far apart you should be from the next person. X’s are fine but I stumbled across an easier explanation that will appeal to those in the gun culture.

Instead of trying to figure out if that is 6 feet or is it merely 5 1/2 feet, the picture below makes it simple. I found it on Reddit.

I’m sure if you wanted to be pedantic you could say that an AR15 with an A2 stock is going to be longer than the M4gery with a collapsible stock throwing off the suggested distance.

The Complementary Spouse is spending this snowy day crafting. It got me to thinking I ought to do some arts and crafts as well. I think I’ll finish the lower for my 6.8 SPC II build. I’ve had the upper for a few years but haven’t gotten around to building a dedicated lower for it. No time like the present! 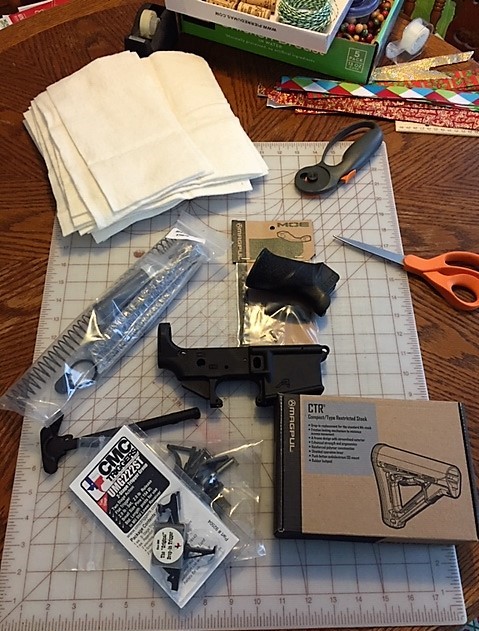 The Complementary Spouse and I were watching Sharyl Attkisson’s Full Measure news program this morning. She had a story on about waste and fraud in the rebuilding of Afghanistan and its security forces. That is irrelevant to my modest proposal. However, seeing Afghan police carrying AK-47s got me to thinking – why are they carrying ComBloc firearms when they could be carrying firearms made in the good old USA.

The US firearms industry has an inventory problem. They overbuilt before the 2016 election on the presumption that we would have a President Hillary which would cause a mad rush to buy while the getting was good. Instead we have President Trump and the pipeline is full of ARs that manufacturers and distributors are trying to clear out. Tam called it a “gun glut” today in a post.

You only have to see the emails and flyers from companies like Palmetto State Armory and CDNN to see that prices have plummeted.  The subreddit /r/gundeals is full of posts about great buys on anything AR. The deals are not just on any old no-name AR. They include stuff like the Colt LE6920 for $799 and the S&W MP15 for $499. Conversely, it doesn’t look like the prices of AKs have fallen anywhere as much. Romanian Wasrs are still over $600.

President Trump campaigned on “buy American” and issued an Executive Order  in April which seeks to maximize the procurement of American-made products by Federal agencies. The Department of Defense and the State Department both provide security assistance to Afghanistan.

While it is somewhat counter-productive to my own selfish interests, I would propose that DOD and the State Department begin buying up much of this surplus inventory at these bargain prices. It would then be used to replace those ComBloc AKs with good, American made, semi-auto AR15s. While as a consumer I would miss being able to buy good quality AR lowers for $50 or less, I also recognize that I have a greater interest in seeing firearms companies – especially the smaller specialty ones – survive as going concerns. The average Afghani cop isn’t going to care if he is issued a Del-Ton, a Colt, or a Spike’s Tactical. He’s just going to be happy that he has a new rifle. Reequipping the Afghanis with AR15s will also provide opportunities for training companies to instruct the Afghanis on the use, care, and maintenance of their new rifles.

I’m sure the media would portray this as a sop to the NRA and the firearms industry. Nonetheless, it helps an American industry, it fulfills a campaign promise to buy American, it ties the Afghanis to us for training, spare parts, etc., it could be done at bargain prices, and it helps preserve the smaller companies. My modest proposal is, at least to me, a win all around.