State Senator Andrew Brock introduced SB 560 on Tuesday in the North Carolina Senate. The bill says, in effect, that a range that moved from its present location to a new location due to annexation, road construction, zoning changes, etc. would still be considered in continuous operation.

*S560-v-1*
A BILL TO BE ENTITLED
AN ACT TO PROVIDE THAT A SPORT SHOOTING RANGE THAT RELOCATES DUE TO CERTAIN CIRCUMSTANCES IS STILL CONSIDERED TO BE CONTINUOUSLY IN EXISTENCE SINCE BEGINNING OPERATION AND NOT TO HAVE UNDERGONE A SUBSTANTIAL CHANGE IN USE.

The General Assembly of North Carolina enacts:
SECTION 1. G.S. 14-409.46 is amended by adding a new subsection to read:
“(f) For the purposes of this Article, a sport shooting range that relocates due to condemnation, rezoning, annexation, road construction, or development:
(1) Is still considered to be continuously in existence since beginning operation at its previous location; and
(2) Is not considered to have undergone a substantial change in use as the result of the location.”
SECTION 2. This act is effective when it becomes law.

The importance of this bill is due to the protections granted in NCGS § 14‑409.46 – Sport shooting range protection. If a range was continuously operated from 1994 onwards without any substantial changes in the use of the range and was in compliance with any noise ordinances at the time the range began operation, then it cannot be sued over noise issues.

With the increasing population growth and increasing suburbanization of North Carolina, ranges that used to be far from residential location are suddenly finding themselves surrounded by housing subdivisions. This protection would be very useful if they do decide to move due to development.

That certainly is the case with the Asheville Rifle and Pistol Club south of Asheville near the French Broad River. There is a new housing development in the last 5 or so years that is just over the ridge from the 200-yard rifle range. See the picture below which is a screen capture from Google Maps. You have to wonder if the developer or the people buying the houses were aware that a rifle range was just over the ridge when they purchased either the land or the homes. 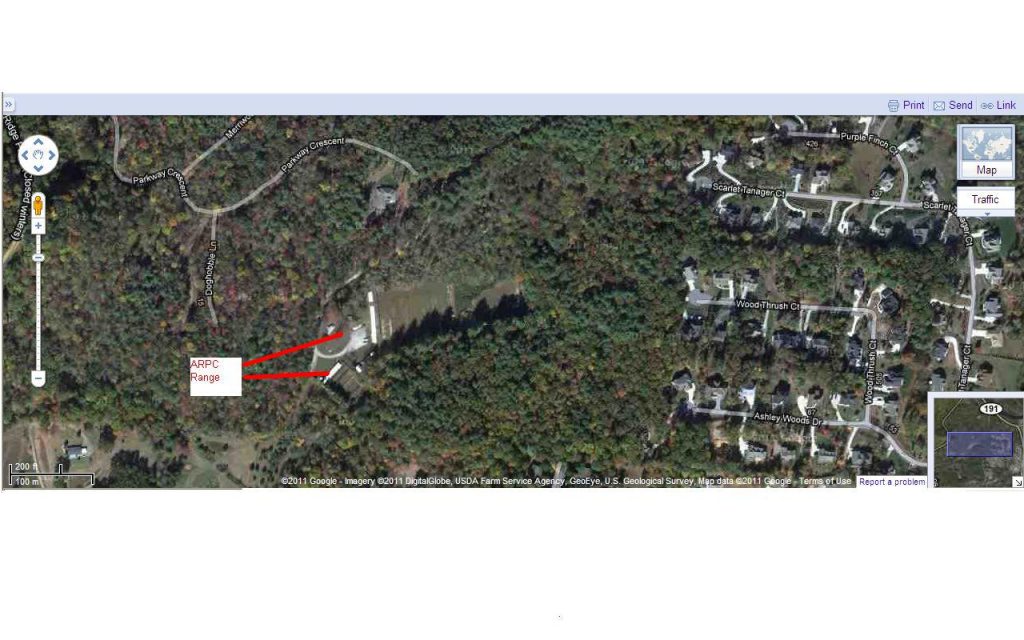