The competition featured teams (shooter and spotter plus team coach) from around the US military plus international teams from the UK, Denmark, Canada, Germany, and, of course, Ireland. Also there were teams from the FBI plus two Georgia police departments. The event was held October 19th through 23rd.

Capt. Nick Privette, commander of the US Army Sniper Course, describes the skills that the sniper teams would be tested on in this competition.

The Irish Defence Forces released this on the win:


“The Army Ranger Wing have long been regarded as one of the finest Special Forces Units in the world. This victory is testament to their hard training and resolve.”

Consistency was the key to the win by the Irish whose names and pictures were not released at their request.

Col. William Thigpen, commander of the 316 Cavalry Brigade, pointed to consistency as the key to success for the Ireland team over the course of 16 events. Teams were tested in long-range marksmanship, observation, target detection, stalking, reconnaissance and reporting and the ability to move with stealth while concealed.


“They demonstrated the most consistency across the board,” Thigpen said.


The statistics haven’t been reviewed yet, but Thigpen said the Ireland team may be the first international team to win the sniper competition.


“I’m almost positive this is the first international team to win the competition,” the commander said. “We are fair in everything we do. That’s how the numbers registered. They were the best team in 2015.”


Over the years, consistency in shooting has been key for winners.


“We found out that over the last couple of years teams that stay within the top five in each event tend to have a better chance in winning the overall competition,” Thigpen said. “That’s a consistent trend at least over the last three years.”


The efforts of the Ireland team were noticed by Staff Sgt. Steve Curry and Sgt. Emmanuel Velayo of Camp Pendleton, Calif., who came in third place.


“The international teams were quite impressive,” Curry said after the ceremony. “The Ireland team did extraordinarily well. They were consistent, they were accurate and they did all the basic things right.”

Even local Columbus, Georgia TV took notice of the win by the Irish team.

On this St. Patrick’s Day, what better post for a gun blog than to highlight the weapons of the Irish Defence Force, or in Irish, Óglaigh na hÉireann.

The primary firearm of the Irish Army is the Steyr AUG A1. They adopted this rifle in 1988. Part of the rationale behind adopting this weapon was that it was chambered in 5.56×45. Adoption of a rifle in this round put them on par with most of the armies of the West. 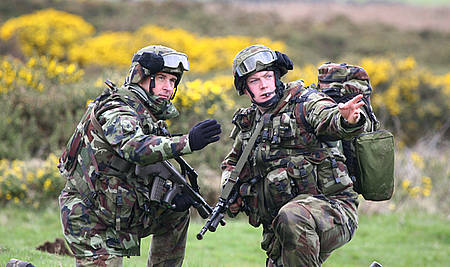 Rounding out the weapons at the platoon level are the M203 grenade launcher made by Diemaco of Canada and the FN MAG 58 general purpose machine gun from FN Herstal. They also are equipped with the AT-4 SRAAW disposable rocket launcher from Saab’s FFV Ordnance.

In the Irish Army, a company is composed of three rifle platoons and a weapons platoon. The weapons platoon is broken down into three sections centered around the platoon’s weapons. First, there is the machine gun section which uses a tripod-mounted FN Herstal FN MAG in 7.62×51. It is called the GPMG SF in the Irish Army. The SF stands for sustained fire. 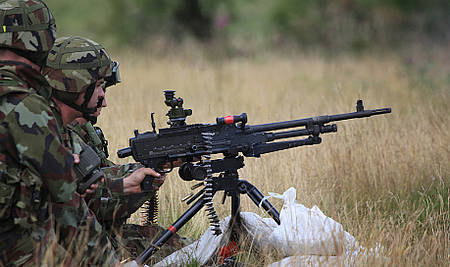 The second section is a light mortar section using the South African Vektor M1 60mm mortar. This mortar is in use by both the South African Defence Force and the Irish Army. It can also be used with a smaller base plate and a special grip in a commando role.

The next level of weapons in the Irish Army is the battalion level where the weapons are both lighter and heavier than at the company level. Each battalion has three rifle companies, a HQ company, and a support company. It is this last company which provides battalion level weapons support.

The heavy machine gun platoon is equipped with the venerable Browning M2 .50 machine gun aka the Ma-Deuce made by FN Herstal in Belgium. The version the Irish Army uses is still equipped with iron sights. They also use the M2 as their primary air defense weapon for the battalion.

The motor platoon uses the Hotchkiss-Brandt 81mm mortar now made by Thales in France. The mortar is equipped with the C2 AI Sight and the Morfire Fire Control Computer.

The Anti-Tank platoon is equipped with the Javelin fire and forget missile system. This is produced in the US by Raytheon The Javelin can be used in either a direct attack or top attack mode.

Providing heavier firepower to the infantry battalions are the Field Artillery Regiment which is equipped with 105mm guns and the Cavalry Corps.

It should be remembered that Ireland is a small country and that the IDF is a rather small force consisting of approximately 8,500 men and women. The two brigades of the Irish Army have a tripartite mission – conventional military operations, United Nations peacekeeping forces, and as an aid to civil power. In this last role, the Ordnance Corps’ Bomb Disposal Team is often called out the the Garda (Irish Police) to disarm explosives and handle unstable chemicals.