One of the great things about the NRA Annual Meeting is the chance to catch up with friends who you haven’t seen in a while. So it was with Kurt Hofmann, the St. Louis Gun Rights Examiner, and me.

While Kurt wasn’t able to actually get to the America’s Center, we were able to meet at his “local” yesterday. Talk about having tons of great beers on tap! Global Brew has more micro-brews on tap than I’ve ever seen. I had the Hacker-Pschorr Maibach and it was really good. 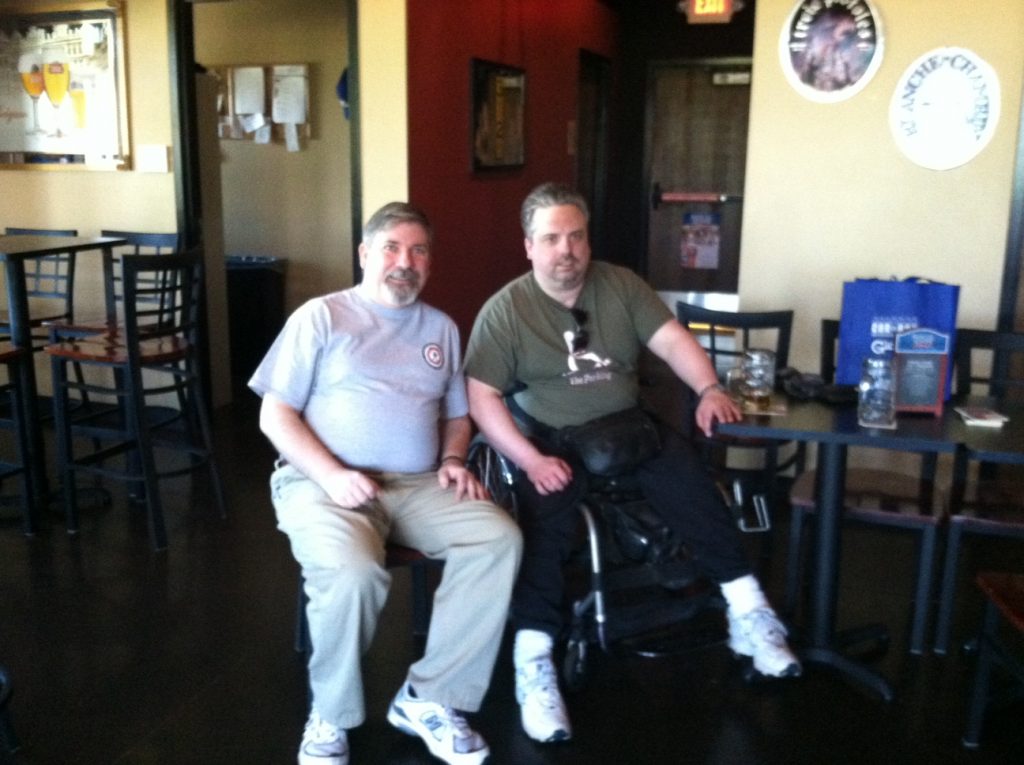 As I said, it was great meeting an old friend again. Kurt does great work as the St. Louis Gun Rights Examiner and we discussed a lot of stuff.

All good things must come to an end and so it is with our trip to St. Louis. We’re hitting the road in a few minutes to return to North Carolina. We had a great time and will have many posts about the NRA Annual Meeting and what we learned in the days to come.

The attendance for the NRA Annual Meeting was just announced. The final number is 73,740 which is an all time record. If I remember correctly, the last meeting in St. Louis set a record.

The other significant number coming out of the NRA Annual Meeting was the number of firearms sold by Ruger over the past four quarters – 1,253,700. This is an all-time number for firearms manufactured and sold within one year by any one manufacturer. This also resulted in a check for $1,254,000 to the NRA as a result of the Ruger Million Dollar Challenge. They presented the check to the NRA at Friday’s Leadership Forum.

As I reported yesterday, Mitt Romney’s speech at the Leadership Forum was received with a polite, if not enthusiastic, response. By contrast, the speech by Wayne LaPierre at the Members Meeting received a much more enthusiastic response. I’m not sure of how many people attended each event.

Both spoke of freedom and the Second Amendment but Wayne’s speech was much more pointed, more aggressive, and provided more “red meat” to his audience. As a result, Wayne got more standing ovations from the crowd. He also had better lines.

Some of them include:

“We are less free today than we were a decade ago”

“The UN doesn’t have a right to mess with our freedom. No way, no how!”

“We will never surrender our guns!”

(In response to report’s of the NRA’s demise) “We’re still here and aren’t going anywhere but the polls on election day.”

The full speech can be seen below:

Bitter of Shall Not Be Questioned has more on Members Meeting here and here.

Mitt Romney spoke before the NRA Annual Meeting Leadership Forum yesterday. It wasn’t a great speech; it wasn’t a bad speech. It seemed like it was a variation on his basic stump speech with maybe a few additions for the NRA audience. I would say the overall reception was polite if not enthusiastic.

The theme of Romney’s speech was freedom which seems to be what we’ve heard before in his speeches. He spoke about freedom in terms of religion, economics, and limited government. With regard to the NRA, he noted that they were a single issue group. He that they should get “high praise (for being a single interest group) when the issue is freedom.” He used this line as the intro into the rest of his speech on freedom.

In what I consider the variations tailored towards the NRA, he acknowledged the role that Rep. Darrell Issa (R-CA) and Sen. Chuck Grassley (R-IA) in pursuing Operation Fast and Furious. He then acknowledged the NRA for saying that Attorney General Eric Holder should be fired. Both statements brought good applause. He then said “I will protect the Second Amendment rights of the American people” which brought a lot of applause.

In general, I’d say Romney did OK but could have had a speech more tailored to his audience with more memorable nuggets. Overall, it was what it was. The speech won’t come back to haunt him with the Obama campaign using snippets of it in its ads. However, the speech can’t be accused of being a rousing stump speech to rally the masses either.

Thirdpower at Days of our Trailers blog did capture some of the misleading tweets from the Brady Campaign and CSGV during the Leadership Forum. You can read them here.

You can see the speech for yourself below:

I looked at a number of the sub-compact pistols today at the Annual Meeting. Patrick, a reader of this blog, was interested in a comparison of the Sig P938 and the Sig P238 in terms of the difficulty of pulling the slide. His mother is disabled, wants a pistol – not a revolver – and has difficulty pulling the slide on many smaller pistols.

To make the test somewhat objective, I had the Complementary Spouse do the testing of the slides. She is a health care professional and has some understanding of the challenges that those with weaker hand and arm strength might face.

First, we tested the Sig P938 which is their sub-compact single stack 9mm pistol. She didn’t find it hard at all to rack the slide on the P938. It fit her hand well, had rear sights that allow the racking of the slide against a pocket, and decent 3-dot sights. 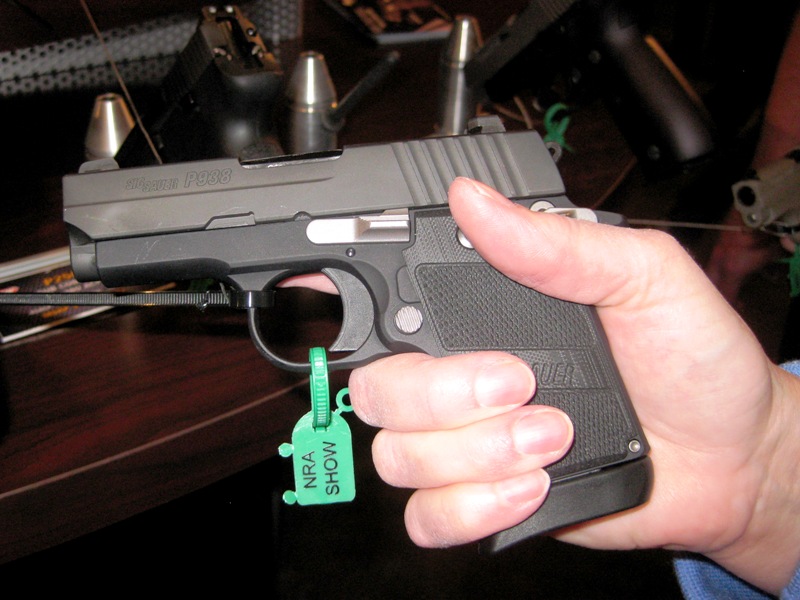 Next up was the Sig P238 Scorpion. It was easier than the P938 and was the easiest to rack the slide of all the guns tested today.  It is a single-stack, single action pistol in .380 ACP. The single action trigger pull of both pistols seemed about the same though I didn’t test it on a trigger scale. 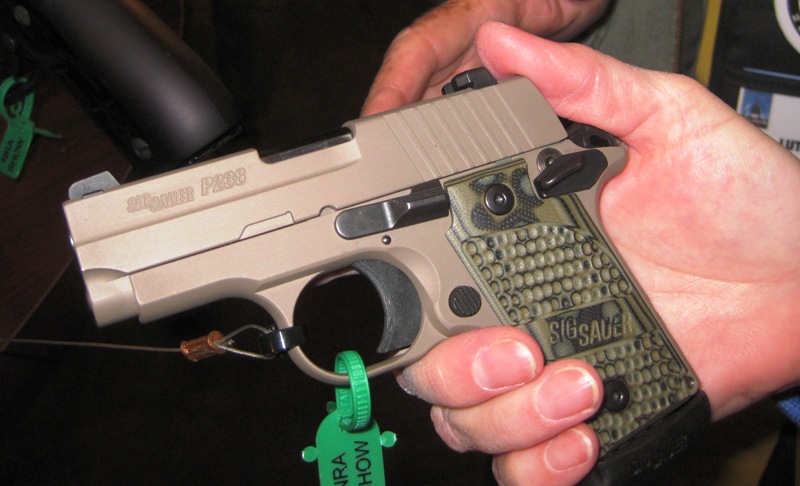 You can see a size comparison of the P238 and the P938 below. They seem to be relatively the same size. 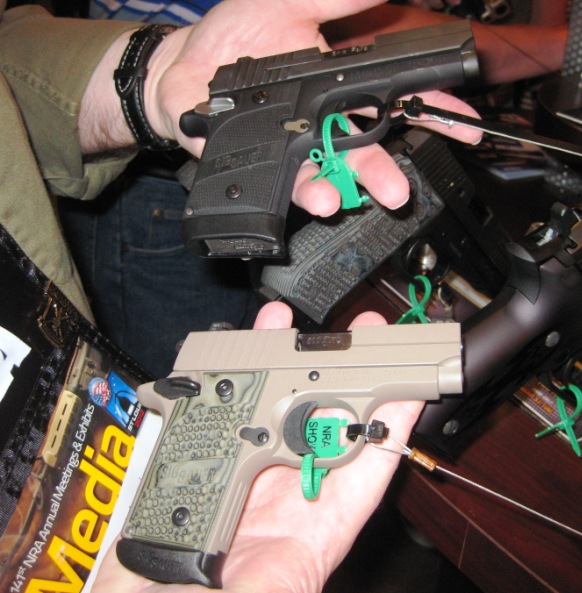 The third pistol tested was the Colt Mustang in .380 ACP. Many have said that the Sig P238 is merely a clone of the Mustang so it was an obvious choice for comparison. It seems to have a heavier spring than the P238 and is about equivalent to the P938. The sights are similar to a GI model 1911. To me, these sights were less user-friendly than those of the Sig P238 Scorpion. 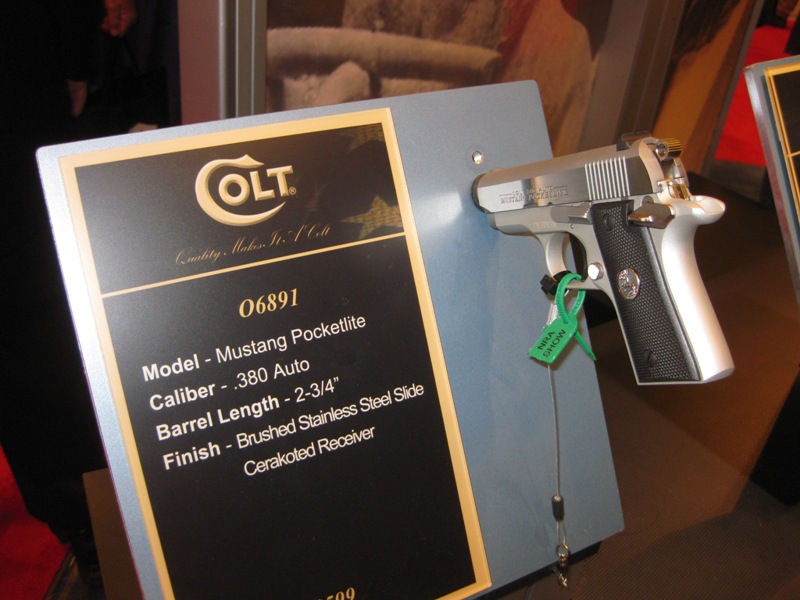 Finally, given all the buzz about the Smith and Wesson M&P Shield, we thought we should add this to the mix. It is the single-stack sub-compact 9mm (and .40 S&W) version of the M&P. The Complementary Spouse found this the hardest to rack of all the pistols we tested and wouldn’t recommend it to Patrick’s mother. She had some difficulty racking slide. It fit my hand well but I did find the trigger pull to be mushy and not crisp. 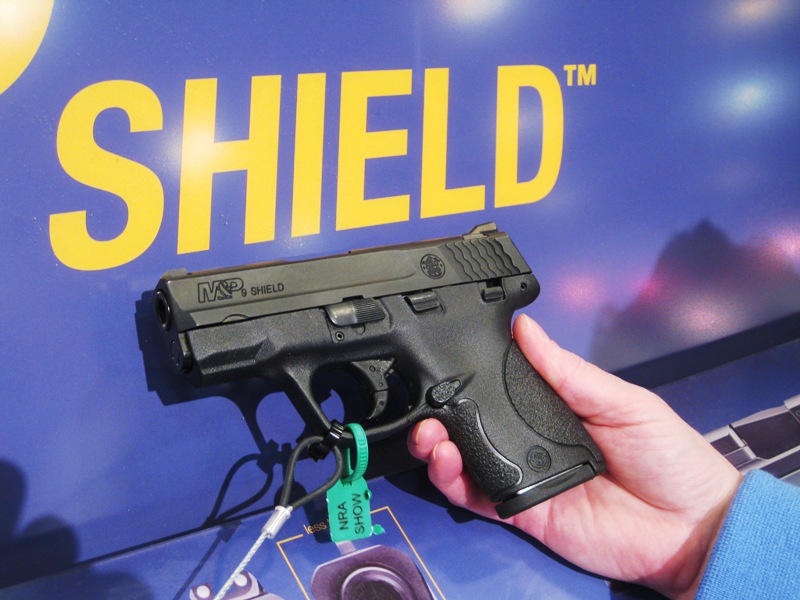 I like attractive women as much as the next guy but sometimes booth babes just are a bit over the top. There were a number scattered around the various exhibits of the NRA Annual Meeting.

Below is a picture of the young lady sitting at the ATI – American Tactical Imports – booth. I don’t know who she is or why it was important to feature her at their booth but she seemed a bit more over the top than some of the other booth babes. I’m sure she is a nice person (or at least I hope so) but the ultra low-cut top and funky stockings just don’t make it for me. 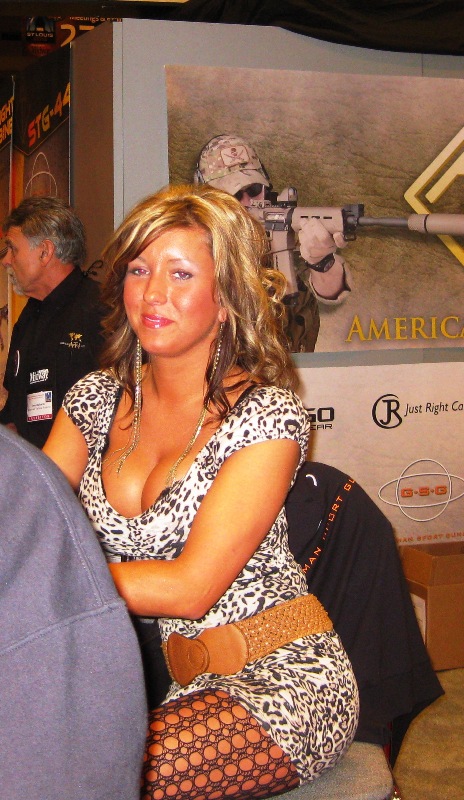 I wish companies would realize that as more women come into the gun community that stuff like this turn will them off. They don’t mind seeing attractive women. They just want them to be like a Julie Golob or a Jessie Harrison-Duff – attractive and accomplished shooters. It isn’t too much to ask.

We’re getting ready to head to downtown St. Louis for the opening day of the 2012 NRA Annual Meeting.

Just coincidentally, it is opening day for the St. Louis Cardinals who are just blocks away at Busch Stadium. The Weather Channel is calling for 60% chance of showers so I hope the Cards get their game in against the Cubs.

Ran into Sebastian and Bitter, Jim Shepherd, Dave Kopel, Jason, and the odious Charles Jaco of the local Fox affiliate when we were getting our media credentials yesterday.

I met a lot of bloggers at JayG’s get-together at the Millennium last night including Ambulance Driver, DaddyBear, Jim Fleming of the Reloading Podcast, Frank James, Old NFO, and a whole bunch of others. I think JayG will be posting some pictures. And yes, in a repeat of Iain Harrison from last year, someone did lick his head. I think it was Ambulance Driver if I remember correctly.

And now off to Opening Day to see Mitt, Rick, Rick, and Newt among many others. I will have to leave the knives at home as the Secret Service would be upset and not let me in the Edward Jones Dome for the Leadership Forum.

Just got to the America’s Center and was greeted by this poster.

– Posted using BlogPress from my iPhone

I’m not sure what is the problem with the Fox affiliate in St. Louis, KVTI Fox News 2, but they seem intent on finding controversy where there seems to be none. Case in point is a story by KVTI’s Kim Hudson that aired today saying that some businesses will be protesting the NRA Annual Meeting.

She does not name the businesses but it sure doesn’t square with the story in the St. Louis Post-Dispatch which quotes many local businesses and service industry workers such as bartenders and cabbies as happy to have the business generated by the NRA Annual Meeting.

My brother-in-law Scott saw this sign when he boarded the MetroLink on his way to work this morning. He is a regular rider and says this is the first time he’s ever seen the sign. As he said on Facebook, “Coincidence??”. I think we all know the answer to that.

Rep. Ed Schieffer’s bill, HB 1483, would get rid of signs like this…permanently. 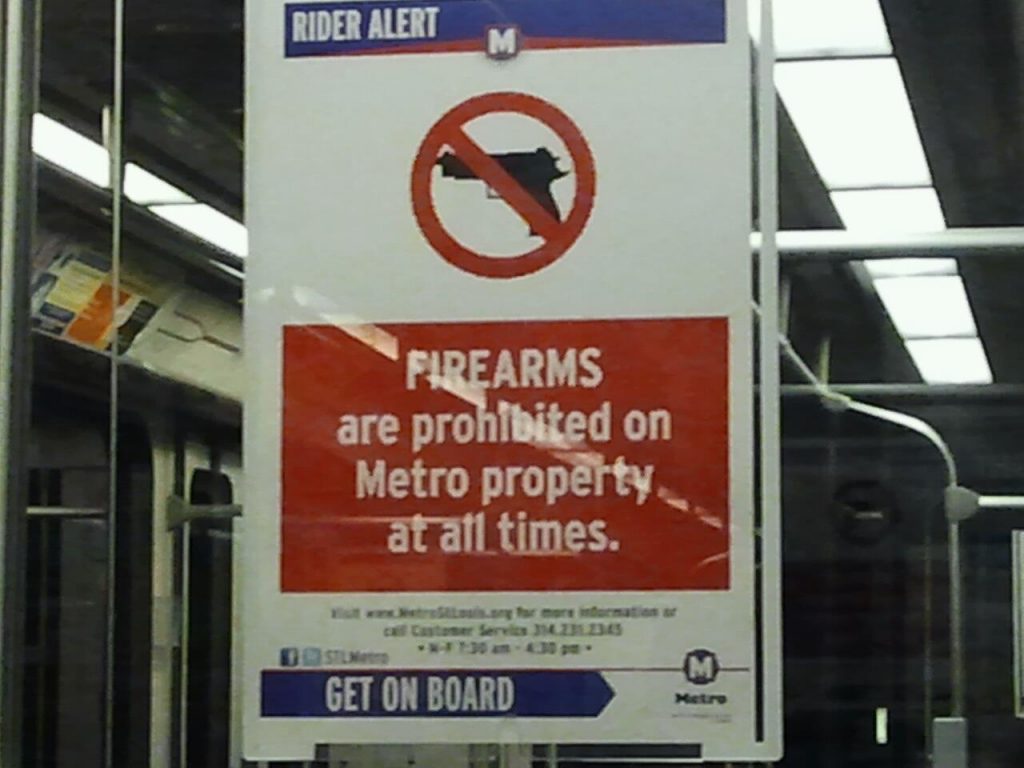