Gun Owners of America has weighed in on the nomination of Andrew Traver to head the Bureau of Alcohol, Tobacco, Firearms, and Explosives. I am a bit surprised that they waited so long to issue a statement given that the NRA and the Citizens Committee for the Right to Keep and Bear Arms issued strong statements within a few days of the nomination.

It was not a good sign that Barack Obama kept his nominee to head the Bureau of Alcohol, Tobacco, Firearms and Explosives a secret until after the midterm election –- and then quickly announced that anti-gun zealot Andrew F. Traver would be named to fill the slot.

After being blasted before November 2’s election by the liberal New York Times for failing to beef up the ATF by appointing a director –- for fear of the wrath of the “gun lobby” -– Obama gets right past the election and, presto chango, a nominee appears. How ’bout that?

And not just any nominee.

As special agent in charge of Chicago’s ATF field division, Traver had taken the lead in calling for a ban on semiautomatic firearms.

And Chicago, of course, has been the epicenter of anti-gun government activism. It is not surprising that Traver has also been active in the virulently anti-gun International Association of Chiefs of Police, which has worked to empower Handgun Control-type activists and has commissioned panels to:

* support one-gun-a-month and lock-up-your-safety laws, as well as “ballistic fingerprinting” files on all firearms;

* espouse an “effective” ban on .50-caliber firearms, and a redefinition of “armor-piercing” ammunition that could effectively ban handgun use;

* mandate gun-destruction policies for law enforcement and enhanced funding to go after guns;

* prohibit all private gun sales and make “prohibited persons” out of a much wider variety of persons committing simple misdemeanors;

* back a repeal of the Tiahrt amendment; and,

* allow federal health and safety oversight of the firearms industry (through agencies such as the Centers for Disease Control, the Consumer Product Safety Commission and the Food and Drug Administration).

It is disconcerting that ANY organization espousing these views would be taken seriously. That an activist in such an organization would be put in charge of the ATF is truly troubling.

On their website, they have a pre-written letter that you can use to request your state’s Senators oppose the Traver nomination. It can be sent as an email directly from their site.

While good in signaling raw numbers opposed to the nomination, I don’t think that is the most effective means of getting the message across. A personal letter hand delivered to the local office would have much more impact in my opinion. I think if you include with that letter a folder containing the statements of the NRA, CCRKBA, and GOA along with other information on Traver to bolster your argument it would add to the impact.

In the pre-9/11 and pre-anthrax days, a handwritten letter sent to the Senator’s office would have sufficed. With all the mail, email, and faxes that they receive daily, I think even that gets lost in the shuffle. It is much harder to ignore a person standing in front of your staff than it is one letter or email out of thousands received in a day.

And as seen in the poster. 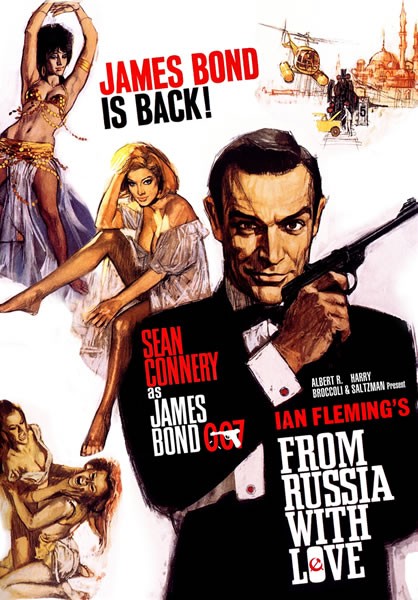 I realize that it is associated with a James Bond movie but that is a lot of money to pay for a fancy BB gun!

The San Diego Union-Tribune posted a story yesterday on the challenge to the requirement to show “good cause” to obtain a CCW in San Diego County, California. This is one of the first times that a major California newspaper has recognized the battle to have self-defense recognized as a “good cause”.

The basis of the suit that Ed Peruta and others have brought in Federal court is this:

What constitutes “good cause” is at the heart of the debate and the one element that is considered on a case-by-case basis.

“Essentially, an applicant must demonstrate facts that show him to be a specific target or subject of a threat,” said Sanford Toyen, the sheriff’s legal adviser. “Simply stating that one needs a CCW for personal protection or safety will not be sufficient.”

Peruta, by the way, has CCW permits in Florida, Connecticut, and Utah. He lives in his RV and is an independent journalist and resides part of the year in San Diego County. The rest of the litigants include a retired MD who’s had death threats in the past, a retired Navy officer, a psych RN who has been threatened by patients, a young hair salon owner who makes large cash deposits late at night, and the California Rifle and Pistol Association.

This thread started by Ed Peruta on the CalGuns Forum notes that some of the facts in the article are off a bit. Nonetheless, they are happy to see the issue getting coverage in a major paper. The best thing about the article, in my opinion, is the picture above of Ed and Lois Peruta. It shows that people wanting a CCW to protect themselves are just ordinary, everyday people.

If you have been around the gun community for more than say 10 minutes, you know who Michael Bane is. He has a whole host of shows on the Outdoor Channel, puts out one of the best weekly gun podcasts around, is a fellow gun blogger, and an all around raconteur of the gun culture.

The Outdoor Channel “for whom he labors” as Michael would say, is having their 11th annual Golden Moose Awards which are fan based. His shows like Shooting Gallery and the Best Defense: Survival are not eligible for these awards as he is an employee of the Outdoor Channel. However, Michael is eligible to win the award in the Fan Favorite – Host/Personality category.

I’d love to see a fellow gun blogger win this prize. You can vote for him by going to the link below:

If he wins, he promises to throw a big party for everyone in the gun culture! With plenty of free ammo for everyone!

Just kidding, Michael. And thanks for the encouragement you gave me at the NRA Annual Meeting in Charlotte to start this blog as I approach my 400th post.

UPDATE: Tam and SayUncle both have reminder posts to go vote. Tam makes a great point about Best New Show and she will be doing some future work for S.W.A.T. Magazine.

Paladin Press is having a one-day sale on certain books. Included in the sale is The World’s Assault Rifles by Gary Paul Johnston and Thomas B. Nelson. This is the definitive book on the assault rifle and weighs, I am told, nine pounds.

Paladin Press is selling it today only (must purchase before 11:59pm MST) for $41.97 plus $4 shipping. You don’t need any code. Go here for the book. They are also including for free a copy of Handbook of Handguns by Timothy Mullin when you purchase The World’s Assault Weapons.

Defense Review called it the best and most complete book on assault rifles ever.

I have no stake in Paladin Press or the book publisher. It is just a great deal. I had been thinking of getting this book for a while and this pushed me over the top. 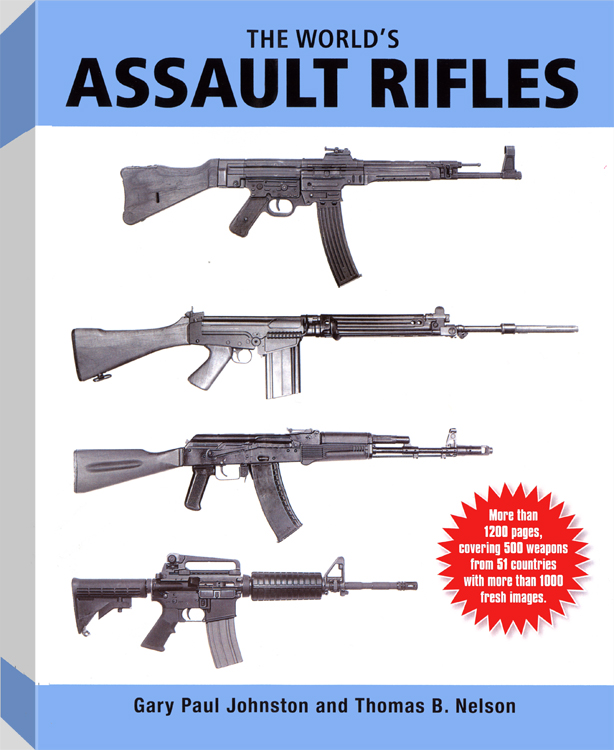 In the United States if you want to own a sound suppressor (or silencer) for your .22 rifle or pistol, you must fill out an ATF Form 4, pay a $200 tax, submit both a picture and fingerprints, get the signature of the chief law enforcement official in the jurisdiction of your place of residence, undergo a background investigation, and then wait. This is in addition to the cost of the suppressor which, I understand, begins in the $200 range.

In New Zealand, you drive on down to Gun City in Christchurch, pay NZ$39.99 or about $29.91 in U.S. dollars, and walk out with your suppressor. As their ad says, “There are no age or licence restrictions on silencer sales.”

Of course, for the price you aren’t getting the top of the line suppressor. However, if you want a suppressor for plinking on your .22 rifle or pistol, it will work just fine.

And your hearing is protected.

It is utterly ridiculous that at a time when so-called environmental groups are suing the EPA over lead ammunition to “protect hunters” from airborne lead exposure among other things that a reasonable method of reducing “noise pollution” and protecting the hearing of shooters still requires a $200 tax stamp.

Military.com ran a story on Friday discussing the XM806 .50 caliber machine gun. The new machine gun is intended to be a lighter weight alternative to the venerable Browning M-2 Heavy Machine Gun.

According to the article, this new developmental machine gun comes in at about half the weight of the M-2. Where the M-2 weighs approximately 120 pounds, the XM806 weighs just over 60 pounds.

The XM806 also has 60% less recoil than the M-2 and has made changes in the way barrels are replaced. An unidentified Army official said:

“Safety is improved through a manual safety and a quick change barrel that eliminates the requirement for the operator to adjust headspace and timing,” Army officials added. “The reduced recoil permits the mounting of an optic for greater lethality through increased first-burst accuracy and control.”

The new machine gun was developed by General Dynamics. It is currently being tested at the Aberdeen Test Grounds. Each of the four test guns has had at leat 90,000 round fired through it. The XM806 is not expected to be deployed to units until late 2012 if all goes well.

The article makes clear that the M-2 is not being retired. Rather the XM806 is an effort to bring that same long range firepower to light infantry and special operations units.

If you listen to these videos, it is clear that instead of blaming the person committing the crime, the organizers of Connecticut Against Gun Violence and My Brother’s Keeper prefer to blame the gun. After all, it is easier to blame an inanimate object for the problem rather than a living, breathing, (supposedly) thinking human being.

The videos in the New Haven Register are not able to be embedded. Instead go here and you can also read the unquestioning story that goes along with it.

One thing the story points out is that Connecticut has some of the most restrictive gun control laws in the United States. If ultra-strict laws aren’t working, what sort of illogic propels CAGV and My Brother’s Keeper to keep asking for even more laws?

Blogging may be light for the following week as I have jury duty.

While I have been called a couple of times in the past, I always got a deferral. This will be my first time actually being part of the jury pool. Rather than ask for another deferral, I thought I should just go ahead and do it.

I wonder if I get a case involving a shooting whether I’ll be dismissed from the jury for having a gun blog. Hmmm.

UDPATE: I’ve been given a one-day reprieve on jury duty.

From the Austin American-Statesman on the D’Cruz cases:

“This is an unprecedented attempt to arm teenagers … even though most states currently restrict them from carrying a concealed weapon,” said Daniel Vice , senior attorney for the Brady Center to Prevent Gun Violence . “Teen gang members could buy guns if this law is changed.”

By the logic of the Brady Center, the combination of the two makes James D’Cruz a potential “teen gang member”. Nice racial stereotype, isn’t it.

I guess this is no surprise given their recent attack on Mr. D’Cruz where they took Facebook postings out of context to conclude he is fascinated with “with gangsters and outlaws, often quoting them, and include violent, threatening messages.”

By this logic, one would say the Yale Law Class of 1973 was filled with a bunch of hack politicians that slept with staff, attacks 18 year olds, and only got a job due to family connections. It makes as much sense.