I didn’t get to all the knife or cutlery companies while I was at the SHOT Show. However, it appears that the creator of these two videos was able to make it. I believe it is a Russian YouTuber who did these but the videos only have background music.

I stumbled across these two videos when I was searching for information on the Kershaw Fatback which is one of their new introductions. Unfortunately for my wallet, I think I’ve found a few more that I’d like to buy. Just like ammo and guns, I don’t think you can have too many knives!

Hybrid AKs which incorporate many of the features of the AR-15 seem to be growing in number. On Day Three of the SHOT Show, Jeff Quinn features two of them. The KF-47 comes from Palmetto State Armory and the M10X Elite Hybrid 7.62×39 is available from MM-Industries.

Alexander Arms is coming out with a 180 grain bullet specifically designed for the .300 Blackout. It will be be available in their subsonic cartridges. Many of the heavier bullets up until now have been .300 Mag bullets used in the .300 Blackout cartridge.

I’m glad to see that XS Sights is coming out with suppressor sights for 1911s with a Novak cut. They currently have them for Glocks.

More on other things that Jeff found on Day Three of the SHOT Show are in the video below.

Who would have ever thought Colt would have released a semi-auto M4 carbine for less than $700? I guess that is one of the “benefits” of their bankruptcy. Jeff Quinn interviews Colt about it. The carbine doesn’t have a dust cover nor a forward assist. That said, it is a simple matter to add them to the carbine if you want them.

What I consider the major find from Day Two is the Inland Manufacturing-Ithaca collaboration on a reproduction of the Ithaca 37 Trench Shotgun from WWII. It will retail for $1200. I’m not sure if it comes with the bayonet or not.

These are two of the finds that Jeff found in Day Two of the SHOT Show. More can be seen below.

Jeff Quinn does a good job of covering some of the new product introductions at the SHOT Show. He came across a number of things I wish I had seen. Given the size of the the SHOT Show, it is no wonder I missed them this year.

For example, the Italian gun maker Pedersoli is now making a .45 Colt/.410 “pistol” modeled on the old Ithaca Auto and Burglar shotgun. For those who don’t know the history of the Auto and Burglar, it was a short barrel shotgun with a pistol grip in 20 gauge. It was made from 1921 until the passage of the National Firearms Act in 1934.

Another interesting find was the new 6.5-300 Weatherby Magnum cartridge. This was the first new cartridge introduction by Weatherby in the last 17 years.

You can see this and more in the video below.

The Guardian is a center-left newspaper out of the UK. It is also vehemently anti-gun.Their latest effort was published on Saturday as I was flying west to go east (but that’s another story for another time).


Rupert Neate and his videographer Mae Ryan did a story called, “Sex, guns and ammo: inside the world’s largest gun industry trade fair”. It was their idea of an expose’ of the SHOT Show. By chance, I happened to speak with Ms. Ryan on the first day of the SHOT Show in the Press Room. I asked if she had gone to Media/Industry Day at the Range and she replied that The Guardian wouldn’t let them attend it. This was in contrast to the young videographer from CNN Money who did attend Media Day, got to shoot some firearms, and had a great time.

Neate tried to tie the growth in sales of firearms to sex, fear of gun control, and mass shootings.

As all marketeers know, sex sells – and guns are no different. Manufacturers have hired a string of professional models to pose with their latest guns. Guns.com, the daily guns blog, collated pictures of its favourite women at the show “who do their very best to highlight and promote new products, equipment and, of course, guns”. Attendees who want to see more are invited to “the sexiest ammo show after party” at the Sapphire strip joint down the strip. Free entry with Shot Show pass.

Guns are a big business, and the industry is raking in record sales and profits as people rush out to arm themselves following a series of mass shootings and out of fear of increased gun control legislation.

He also used misleading stats such as this:

“People are buying guns as part of the American dream of freedom and liberty,” said Brauer, who is based at the Hull College of Business at Augusta University. “And also, the hope and the dream of being able to use guns in self-defence.”

People very rarely get to live out that dream, with FBI data showing that gun owners are 78 times more likely to kill themselves than they are to carry out a “justifiable homicide”, which the agency describes as “the killing of a felon, during the commission of a felony, by a private citizen”.

However, what took the cake is shown in the video below where Neate asks a S&W representative if the M&P 15-22 Sport (in .22 LR) is the same rifle as was used by the Islamofascists to kill 14 people in San Bernardino. This was after he violated Rule No. 1 by pointing what appears to be an air rifle with a scope at an attendee.

The Poynter Institute which has as its mission elevating journalism took Neate, Ryan, and The Guardian to task over its one-sided, misleading, and unfair story.

While the video makes for interesting viewing, in my judgment, the story isn’t fair. It was theatrics masquerading as even-handed reporting. From the very beginning of the video, it was clear the journalists counted on causing a stir on the convention floor…

But when journalists tackle contentious issues, they have an obligation to develop expertise about the story they are reporting. They build trust with sources on all sides of the story. The more you know about a subject, the more aggressively you can pursue it.

I think Poynter hits on the head – serious subjects require serious reporting – not this anti-gun editorial that could just as well have come from Bloomberg’s The Trace.

I got a call from Southwest Airlines at 8 this morning. They were calling to tell me that the second half of my flight home – Chicago to Greenville-Spartanburg – was canceled and that I needed to make adjustments.

And this is why:

So instead of getting home Saturday night, I will be spending the night in Houston. I’d much rather spend the night in Texas than in Chicago!

We, by the way, live in that nice pink area on the border of Buncombe and Henderson counties. The Complementary Spouse says it has started snowing again — heavily.

It could be worse. I could be living in northern Virginia with a car stuck at the airport. That’s the situation facing a lot of the NRA staff here at the SHOT Show.

When I asked for suggestions as to which products you wanted me to check out, reader David suggested somewhat facetiously that I see Trigger Point Technology. He also asked me to find out their business plan to avoid getting sued out of existence.

As you can see in the video below made by Ian McCullom and Karl Kasarda of InRange TV, a laser or light that is activated by touching the trigger is really a bad idea. Just like with so-called “smart guns” or “microstamping”, just because your engineers can invent a technical device it doesn’t mean it will work in the real world.

On the Trigger Point Technology product, just say no.

What does the fashion forward, well-dressed woman wear when she is in a non-permissive environment to afford her some modicum of protection?

The Mantis Knives Vicious Circle last-ditch knife! It looks like a modern style necklace but it contains a sharp surprise. 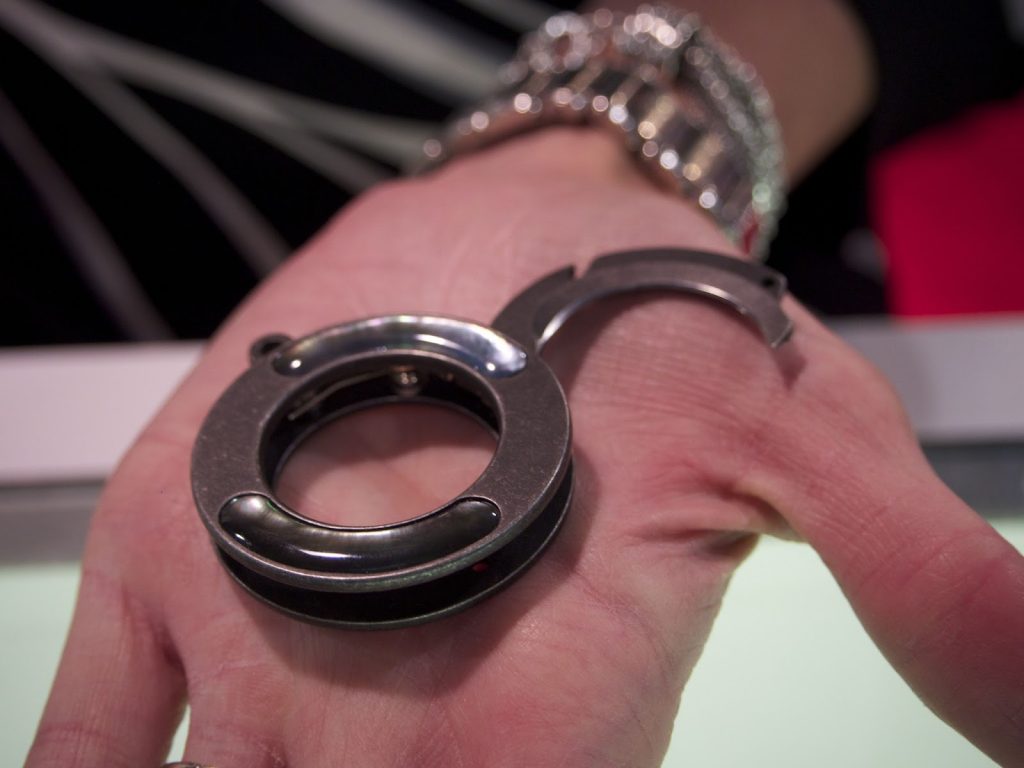 The knife opens when you pull it free from the necklace. It isn’t meant to be the first line of defense but it sharp and it can put an attacker in a world of hurt.

The MSRP of the Vicious Circle is $65. It comes in 10 colors and with different stones.

Since I only made a part of Media/Industry Day at the Range, I think this 2-part report by Jeff Quinn at GunBlast.com gives a better picture of what was shown there.

I did get to shoot the new revolver from Kimber. It is a six-shot, double-action only .357 Magnum revolver. I found the trigger pull to be smooth and the revolver controllable by even me while shooting .357 Mag ammo. I would have liked to try it with some .38 Special to get a better feel for the gun without the concussion but beggars can’t be choosers.

Now for the second part of Jeff Quinn’s report.

Glock has now introduced two of their most common pistols set up for reflex optics. I got a chance a shoot the Glock 19 MOS yesterday and I like it. Shooting a pistol with a red dot reflex optic takes some getting used to but as many others have said, it probably is the wave of the future.

My only problem with Glocks is that I have small hands and they don’t quite fit me that well. I’ll have to work on that.

GLOCK Releases Two New MOS Pistols:
G17 Gen4 in MOS & G19 Gen4 in MOS
Las Vegas, Nev. – Jan. 18, 2016 Today, GLOCK, Inc., announced the release of two new pistols to join the Modular Optic System (MOS) series, the G17 Gen4 in MOS and the G19 Gen4 in MOS.
Now, two of GLOCK’s best selling pistols are available with milled slides designed specifically to be adaptable to multiple optic systems without costly customization. The G17 Gen4 MOS and G19 Gen4 MOS are the ideal addition to the series as the market continues to trend toward optic-ready everyday carry and defense.
“We’re seeing more and more professional trainers recommend the use of optics for primary and defensive use,” stated Josh Dorsey, vice president at GLOCK. “Optic ready pistols will enable faster target acquisition when a reflex sight is mounted.”
Both pistols are chambered in .9mm and do not differ in specifications from their respective standard models. Other MOS pistols, introduced in January of 2015, are the G34 Gen4 MOS, G35 Gen4 MOS, G41 Gen4 MOS, and the G40 Gen4 MOS.  The new models were unveiled today at the Range Day for SHOT Show and will be on display at the GLOCK booth (#12254) throughout the week. The pistols will be available for purchase at retailers in the following weeks.
To learn more about the new MOS pistols, visit https://us.glock.com/MOS.