I spent yesterday Friday at the NRA’s National Firearms Law Seminar. The event came to order about 8:15am and didn’t stop except for lunch and short breaks until shortly after 5pm. I sat with Aaron Kendal, blogger and attorney, at the meeting. Other bloggers that I know who were there included Bitter and Sebastian of Shall Not Be Questioned, Robert Messenger of Great Satan, Inc., and Jaci J. of Team Gun Blogger.

The best thing about the seminar is the people you meet. For me the highlight was getting to meet and chat with Judge Richard Dietz of the North Carolina Court of Appeals. He was appointed to the court in 2014 and then won a seat on it in 2016. Prior to joining the court, he had a significant appellate practice.

Of interest here, Judge Dietz argued Bruce Abramski’s case before the US Supreme Court. That was the case of the Virginia policeman who used his LEO discount to obtain a Glock for his uncle in Pennsylvania. Even though Abramski followed correct Federal procedure to transfer the firearm to his uncle including a NICS check, he was convicted of a straw purchase because he checked the yes box on the Form 4473 as the actual purchaser. The lower courts held that because Abramski’s uncle had given him the money to buy the handgun, he was not the actual purchaser. The Supreme Court in a 5-4 decision with Justice Kennedy being the swing vote upheld the lower courts. 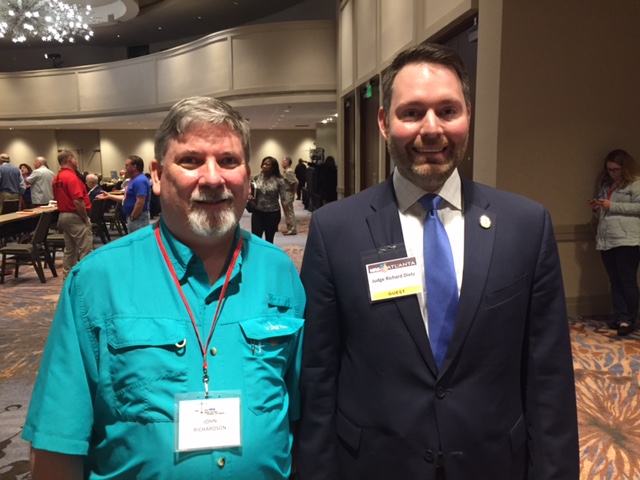 Sebastian and Aaron did a great job live blogging the Firearms Law Seminar. Rather than reinvent the wheel, I think links to their posts are in order.

Responsibility for Criminal Firearms Violence (and the PLCAA)

Non-Profit Law as It Relates to Gun Clubs

James Vogts on the PLCAA

ATF Lawyer James Vann (who is actually a gunny)

(I wrote most of this blog post on Saturday morning but just didn’t have the time or energy to finish it until tonight…sorry).