The attendance figures released for the 2018 NRA Annual Meeting have been released. 87,154 people attended this year which broke the record set in Houston in 2013.

New record attendance for #NRAAM: 87,154 law-abiding attendees over the three-day weekend in Dallas. #2A

Bitter at Shall Not Be Questioned posted a very good graph showing attendance at NRA Annual Meetings since 2004.

I was there each day and it didn’t feel crowded. I think this might have to do with the layout of the Kay Bailey Hutchison Convention Center. I will say the line to get into the Leadership Forum to see President Trump and VP Mike Pence was very, very long.

NPR covered the Leadership Forum at the NRA Annual Meeting today. In addition to the speeches by the various politicians, they sought out individual NRA members.. My friend and roommate at the NRA Annual Meeting Liston Matthews agreed to be interviewed. Liston gave what I think was a great, reasoned interview even though there were some “gotcha” questions by Mary Louise Kelly.

You can hear the whole interview embedded below.

Kudos to Liston for doing such a good job.

I was in line with gun bloggers, a reporter from HuffPo, and lots of local media outlets. I don’t know whether it is because of President Trump being here or because of the potential for demonstrators post-Parkland but they are here.

The cult of personality known as Giffords sent out a fundraising email this afternoon. They called attention to the NRA Annual Meeting in Dallas and, in particular, to a seminar put on by Dr. John Lott regarding the false and misleading claims made by the gun control industry.

This weekend, the NRA gathers for its annual convention in Dallas, Texas.

And on Sunday morning, at 11 am, one of the most important events happens in two combined meeting rooms, D163 and D165, on the ground floor of the Kay Bailey Hutchison Conference Center. It’s titled:

“The War on Guns: Arming Yourself Against the False Claims That Will be Made Against Guns During the Election”

Here’s the truth: the American people are wise to the game. They know that if more guns made America safer, we would be the safest nation on the planet.

But change will never happen until candidates and elected officials understand there is more to fear from all of us than what’s happening in Dallas this weekend.

They are correct about two things: the NRA gathers this weekend in Dallas and John Lott’s message is important. If Dr. Lott’s message, facts, and figures were not valid and not important, they would not have brought attention to it. If they didn’t consider it a threat, then they wouldn’t have attacked it.

Notice their sleight of hand in saying “if more guns made America safer, we would be the safest nation”. The former is comparative while the latter is superlative. Thus, in their false comparison used to attack gun ownership, one more firearm would make the US the safest country in the world. No one in the gun rights community has makes that argument.

Jonathan Sullivan aka Linoge at the blog Graphical Represention and its predecessor Walls of the City looked the gun control argument of more guns equal more deaths.  He found a negative correlation between the two. Moreover, he has replicated this study for a number of years as new data has become available. Using both firearms/death per capita and total firearms/deaths, he found a negative correlation. While it can’t prove that more guns equal less deaths, it can be used to show that more guns does not more deaths.

Read Sullivan’s work and read Dr. Lott’s work. Both have delved into the numbers and found the arguments of the gun prohibitionists and their gun control industry lacking.

I endorsed Adam Kraut for the NRA Board of Directors before the balloting started. The other two people I endorsed – Julie Golob and Tim Knight – made it on the board but Adam came up a bit short. He has let me know that he will be running again for the 76th Director position. It is a one-year post and ALL members are eligible to vote for this director. You don’t have to be a Life Member or a 5-year continuous member to vote on this position. However, you must vote in person at the NRA Annual Meeting in Dallas. 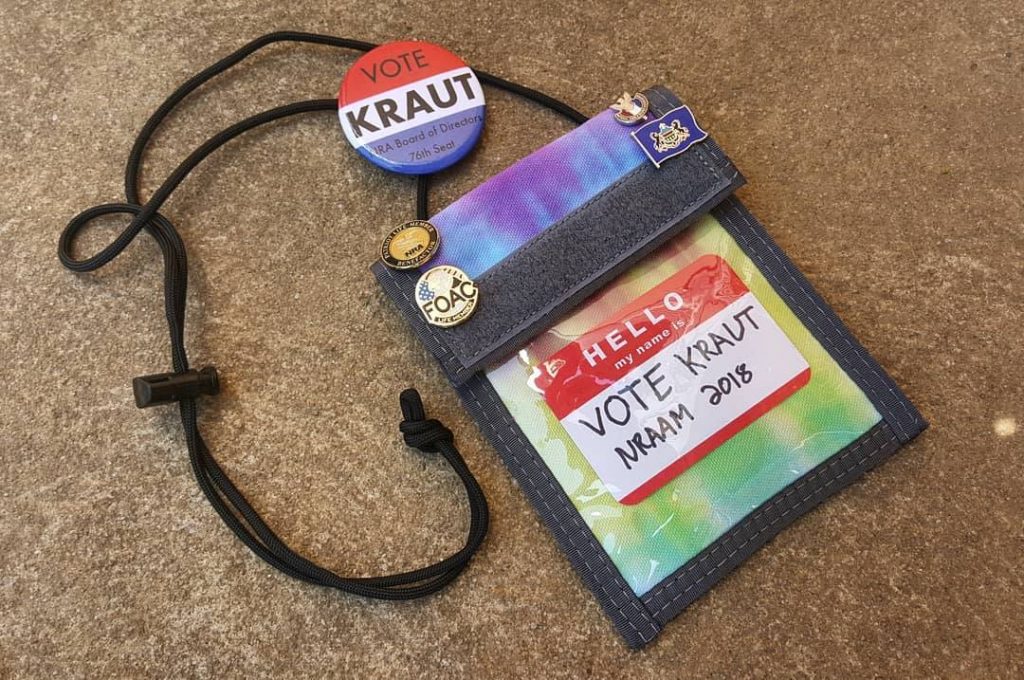 You didn’t think we were giving up did you?

Last year we lost by only 60 votes. Bring everyone with you to cast a ballot.

If you are going to be at the Annual Meeting, I would urge you to vote for Adam. We need young blood like him on the Board of Directors now more than ever.

President Trump didn’t think the White House Correspondents’ Dinner was worth attending. From what I heard about it, he was right. However, a number of reports say that he will be attending the Leadership Forum at the NRA Annual Meeting in Dallas on Friday. A number of politicians from VP Mike Pence to Gov. Greg Abbott (R-TX) to Sen. Ted Cruz (R-TX) had already been scheduled to appear. My thought was that Pence was to be the stand-in for the President Trump at the event.

I’m sure this will guarantee that there will be protesters at the Annual Meeting. I’ve heard that Alyssa Milano will be leading the Holly contingent and I guess Shannon Watts will be there with the Demanding Moms for Illegal Mayors. However, this leaves open the question as to whether everyone’s favorite (sic) David “Camera” Hogg will be there to lead the Children’s Crusade Against Enumerated Rights.