The Supreme Court of Ohio ordered all parties in State v. Philpotts to file supplemental briefs addressing the impact on the case of the US Supreme Court’s decision in NYSRPA v. Bruen. Given the import of the Bruen decision on both the state and federal level, this seem eminently reasonable.

That is except for Justice Jennifer Brunner (D-Ohio) who seems to take the first line of Sam Cook’s classic What a Wonderful World as her motto. She issued a dissent in which she objected to this order of the Ohio Supreme Court.

After rambling on about it being hard to convey lessons from history, about how revisionists have re-written history to make it fit modern times, and how it is hard to use primary documents, she comes up with this objection to the use of text, history, and tradition.

{¶ 8} Importantly, the glaring flaw in any analysis of the United States’ historical tradition of firearm regulation in relation to Ohio’s gun laws is that no such analysis could account for what the United States’ historical tradition of firearm regulation would have been if women and nonwhite people had been able to vote for the representatives who determined these regulations. How would this problem be addressed in any modern analysis of historical gun regulations? It cannot simply be ignored. And even if a court tries to take the views of women and nonwhite people into account, are there sufficient materials on their views available to enable reliable conclusions to be made? (emphasis mine)

Does she not know that gun control was historically used to keep nonwhite people disarmed and disenfranchised? There have been many books and articles on this such as Prof. Nicholas Johnson’s book Negroes and the Gun: The Black Tradition of Arms. Perhaps she is unaware of Ida B. Well’s seminal work on lynchings in which she said, “a Winchester rifle should have a place of honor in every black home, and it should be used for that protection which the law refuses to give.” A very recent study by economists at Clemson found that when blacks had greater access to firearms, the incidence of racial violence and lynchings was diminished.

Does Justice Brunner really think that nonwhite people preferred being disarmed in the 18th, 19th, and 20th centuries? Since there were no laws preventing women from being disarmed, I will skip that except to say that Annie Oakley was a damn fine shot.

And to answer her question, yes there are sufficient materials available to discern the views of nonwhites on gun control with which to enable the court to come to a reliable conclusion.

UPDATE: I found out this evening that Justice Brunner is running as the Democrat candidate for Chief Justice of the Ohio Supreme Court. Among her pledges is for “bail reform”. Given the experience in other states with “bail reform”, it seems a recipe for more property and violent crime in Ohio. That, when combined with her willful ignorance of history, makes her totally unsuited for the position she seeks.

Her opponent, Justice Sharon Kennedy, has the endorsement of the Buckeye Firearms Association along with many law enforcement organizations. Before she went to law school, Justice Kennedy was a police officer in Hamilton, Ohio. Justice Brunner, by contrast, has a number of union endorsements but not a one of them deals with law enforcement.

If you live in Ohio, I would urge you to get out to vote for Justice Kennedy and get your friends, family, and neighbors to do the same.

When I posted A Trip Down The Anti-Gun Memory Lane to Twitter I made sure to tag Ladd Everitt in it. And he responded with his usual sort of invective.

Thanks for the publicity. Let's get the message out to all your fake loser friends servicing Trump.

I responded that it was my pleasure.

Let's keep rolling. That way we can do a better search to see if a single one of you losers has criticized much less threatened Trump's repeated abuses of power.

As Howard Nemerov pointed out on Facebook, if we are “fake losers” then that by definition makes him a “fake winner”.

As to his assertion that we are loathe to criticize President Trump, he must have been living under a rock. Many in the gun rights community have been very critical of President Trump with his ban on bump stocks by decree and redefinition. That would include me. He is also ignorant of the many lawsuits brought by gun rights groups like the Firearms Policy Coalition.

While now relegated to the periphery of the anti-gun industry, I’m glad to see that time has not made Ladd change his approach to those of us in the gun rights community. “Fake losers”, “insurrectionists”, and “gun extremists” are all the products of someone who knows he has a weak argument. If he had the facts, the data, and most importantly, the Constitution on his side, he would be arguing that but he can’t.

One of the more popular sub-reddits on Reddit.com was r/gundeals.  It was one of the first places I went to see if a dealer was having a sale.As of today, it is gone thanks to a new Reddit policy.

From Bloomberg Technology on Reddit’s response to criticism:


The policy change invoked a lively discussion on the platform. A number of Reddit users specifically expressed frustration about the loss of r/GunDeals, arguing that the group does not actually conduct sales but links to deals offered elsewhere. The company responded: “Because this policy forbids facilitating the transactions, it impacts communities that are dedicated to connecting buyers and sellers. We want to emphasize, though that communities dedicated solely to discussion about guns and gun ownership are not impacted by this change.”

I never once saw an individual selling a firearm or accessory on /r/gundeals. Rather it was always a post with a link to a company’s website. It also have a feature where you could say you were looking for a deal on X and people would respond if they knew of such a deal.

Here is the full statement from Reddit’s administrators:

When considering a gift or transaction of goods or services not prohibited by this policy, keep in mind that Reddit is not intended to be used as a marketplace and takes no responsibility for any transactions individual users might decide to undertake in spite of this. Always remember: you are dealing with strangers on the internet.


EDIT: Thanks for the questions everyone. We’re signing off for now but may drop back in later. We know this represents a change and we’re going to do our best to help folks understand what this means. You can always feel free to send any specific questions to the admins here.

What this is saying is that guns should be treated just the same as hookers, blow, and fake IDs. Gee thanks, Reddit. Ooops, I see that hookers still have their own subreddit. There is also a subreddit for selling used panties. Go figure.

However, there is another option. The website Voat, kind of an alternative Reddit, now has a gundeals subforum. I believe those that started the subforum were the administrators of the /r/gundeals subreddit. The number of users is going up by the minute.

There is a movement among some politicians to reduce the voting age from 18 to 16. Some municipalities have actually done this. I even read an editorial from a University of Kentucky law professor stating that students from Parkland High School show why this is a good idea. It doesn’t matter that this students are being scripted, used as props, and are coached what to say.

In a free society, I think having immature, easily swayed young minds pull the voting lever is a recipe for disaster. As Michael Bane said the other day, think Lord of the Flies.

Yet these same politicians and pundits want to raise the age at which one can purchase any long arm to 21 years old. 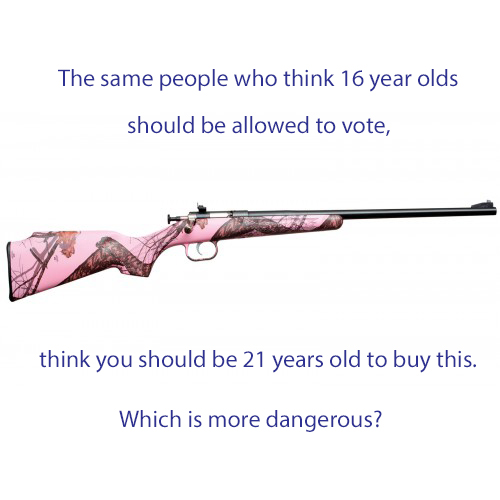 You tell me which is more dangerous.

I know what I think.

Lisa Fullington is outraged, outraged I say, because she saw a man carrying at a grocery store in Greensboro, NC. She is even madder that the store refuses to post the store against carry.

The store is question is a Harris-Teeter grocery store located in one of the nicer areas of Greensboro. I’ve shopped at this store many a time and affectionately call it the Taj MahTeeter because it is so large and so upscale. It is located in a shopping area that has REI, Ann Taylor, Talbot’s, and Brooks Brothers among other upscale stores.

“I don’t think you need to bring your gun into a grocery store, a shopping center, and I’m a little peeved that Harris Teeter can’t put up a sign that says no arms, concealed or otherwise, allowed in the store,” Fullington said Wednesday in her home explaining that she has decided to no longer shop with the grocery store chain. It’s an about-face for a woman who’s been a Harris Teeter faithful for years.

“I’m not joking, I’m not going there. I think it’s dangerous to shop there,” she said incredibly. “I just can’t imagine that they want people in their stores, it’s dangerous! I mean, those people, I don’t know who is trained and who isn’t”

And Lee Atkinson is fighting right along with her.

“It’s a place I go all the time, so I can’t solve all the places where people are with guns but I can start where I shop,” Atkinson said.

This past summer, lawmakers in Raleigh expanded the concealed carry law which now allows guns in bars, restaurants and other areas unless the owner forbids it.

“I don’t want to be in a place where people are packing a lot of guns. I don’t want the possibility of bullets whizzing past my head,” added Atkinson.

You can see their little hissy fit here. Bob Owens calls them “two self-important, self-absorbed gun haters” and I have to agree. My consolation is that I won’t run into them when I’m in Greensboro and going to the Taj MahTeeter for my favorite Utz Extra Dark Special pretzels.