Libertarian comedienne Julie Borowski with her squeaky little voice and innocent, confused looks nails it in this video. This is especially true given the statement from Sen. Joe Manchin (D-WV) that “due process is what’s killing us right now”.

Due process is and will remain important so long as we as a country remain faithful to the Constitution. Once due process goes we might just as well have just remained colonies under the British Crown.

Kurt Hofmann is the St. Louis Gun Rights Examiner. Due to a horrorific traffic accident which left him in a coma for nearly a month, Kurt now gets about in a wheelchair. For someone for whom life has played such a cruel trick, he is remarkably well-adjusted, even-tempered, thoughtful, and full of life. This is especially true when you consider that at an earlier time in his life Kurt served our country as a paratrooper in the 82nd Airborne Division. I have had the pleasure to meet Kurt in person more than once and to have an ongoing correspondence with him. I consider Kurt a friend and one of the good guys.

Kurt does get a little angry at the gun prohibitionists in Illinois and elsewhere who have conspired to deny him the right to carry a handgun concealed or otherwise. It is OK with them that a man confined to a wheelchair should be denied the ability to provide for his own self-defense. His St. Louis GRE columns often take a no holds barred approach to these gun prohibitionists and he points out the fallacy of their arguments on a regular basis.

Groups like the Coalition to Stop Gun Violence (sic) don’t like people like Kurt and try to deride him as an “extremist” or an “insurrectionist”. They particularly like that last tag. Unfortunately for them, Kurt wears that tag as a badge of honor. Now it seems they have decided he is such a threat to them that he must be silenced. 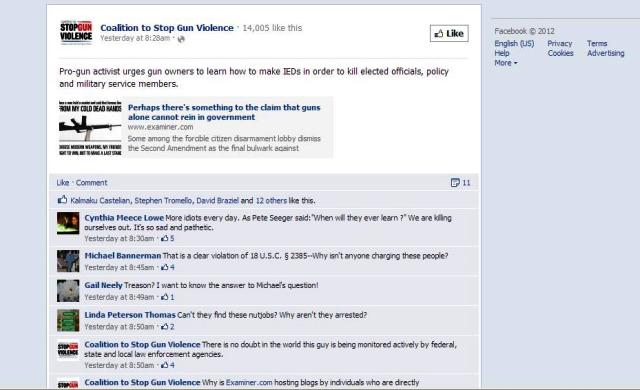 Yesterday on Facebook (see above) CSGV accused Kurt of advocating bomb making in order to “kill elected officials, policy and military service members”. They base this on a March column he wrote. Of course, having read Kurt’s column in question, there is zero truth to the accusation. Kurt merely suggested downloading some publications dealing with improvised explosives while they were still available on the Internet. He did not advocate the manufacture or use of these explosives for the purposes of any illegal activity.

CSGV is actively attempting to have Kurt removed as an Examiner columnist. As Kurt notes, they are also “consulting” with anti-gun lawyer Michael Bannerman who has been a target of Kurt’s criticism to find ways to have him charged with “advocating the overthrow of Government.”

Groups like the Coalition to Stop Gun Violence (sic) and their leaders obviously have no respect for the Bill of Rights. They hate the Second Amendment and just as evidently don’t care for the First Amendment and its guarantees of freedom of speech and press.

They are totalitarian thugs and need to be called out as such.

The Norfolk Virginian-Pilot published an editorial today entitled “Don’t surrender to such violence”. While there were things I could agree with in it such as increased funding for mental health and substance abuse programs, there were some parts that just were beyond the pale. I certainly disagree with their support for the Southern Poverty Law Center which, to be frank, exists primarily to keep founder Morris Dees living in the style to which he has become accustomed.

However, the really egregious part of the editorial was this:

And we should be talking about how to shape gun-control measures to limit access to weapons and ammunition for people not sane enough or civil enough to possess them.

The intent of the Second Amendment has been interpreted historically as a right to self-protection. It has been proved, of late, to be a license to kill innocents – and as many as possible.

You have to wonder how they would react if this was applied to the First Amendment rights of freedom of speech and freedom of the press. There are plenty of journalists who’s sanity I’ve questioned and who are barely civil. The famous journalist H. L. Menchen comes to mind with regard to civility. Moreover, for many journalists, freedom of speech and of the press has become a license to publish stories with their own slant and, in all too many cases, knowingly based on lies.

H/T Josh Horwitz who approvingly pointed out this editorial.