Chris Muir’s Day by Day Cartoon for Monday nails it as to who is really calling the shots in Virginia.

I guess that is what Northam will be doing this afternoon – shuffling out there like a good boy for the media.

Chris Muir at Day by Day Cartoon, as per usual, nails it. He calls out lefty filmmaker (and gun law violator) Rajina Sincic and Americans for Responsible Solutions as well as those SJW* who continue to perpetuate the U.Va. rape hoax story.

After reading this cartoon, I have this running through my head! Listen at your own risk.

*SJW = Social Justice Warrior – I had to look up this acronym a few weeks ago after seeing it used frequently on Facebook. Those darn kids and their newfangled acronyms!

Organizing for Action (OFA) says it intends the events to be a “powerful reminder of what we lost a year ago, and a reminder that we as a nation need to do more to prevent gun violence and keep our communities safe.”

OFA says that the events will be held in towns and cities across the country and will be used to “call on Congress to finally take action to make our communities safer.”

Noting that The Hill characterized OFA as Obama’s “campaign arm”, Glenn Reynolds said “it’s super-creepy that a term-limited president has one.” To me, OFA seems like something one might have seen in Mao’s China, Hitler’s Germany, or Mussolini’s Italy. In other words, an organization whose sole purpose is to be an extra-governmental, extra-political party organization providing cult-like followers to the man in power. That goes beyond creepy in my opinion; that is scary.

Chris Muir at Day By Day Cartoon nails it today with this cartoon. Using kids and funerals as props to push a political agenda is despicable but not unthinkable for the Community Organizer in Chief it seems.

Chris Muir nailed it today in his Day by Day cartoon.

I would be proud to be considered a dissident given that CSGV already considers me an insurrectionist and gun extremist. It would complete the troika.

Given the history of Obama throwing subordinates and other supporters under the bus, I don’t think any of us really believe that he’ll go to the mattresses for Eric Holder. Chris Muir in tomorrow’s Day by Day cartoon captures this reality very well.

It is obvious that Muir keeps up with the gun blogs to know about Mike’s latest revelation regarding the new whistleblowers. 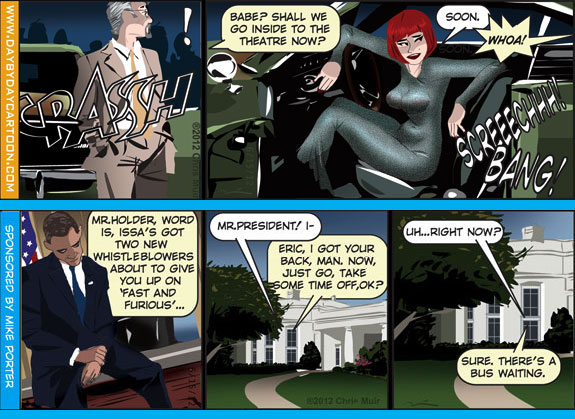 I agree with Miguel that when Chris Muir of Day by Day Cartoon puts you in his cartoon strip, you’ve arrived as a blogger! And then some!

Now to figure out which revolver Tam is carrying.

Courtesy of Chris Muir at Day by Day Cartoon

If Attorney General Eric Holder applies the same standards to investigating the Trayvon Martin case as he did to Operation Fast and Furious we would end up with something like Chris Muir’s Day by Day Cartoon below.

Courtesy of Chris Muir at Day by Day Cartoon