According to CBS Baltimore, the new center will be co-led by Daniel Webster who led the Bloomberg School center and Joshua Horwitz who was executive director of CSGV.

The release from JHU’s Bloomberg School of Public Health said the new center would “bring a public health lens to reduce gun violence in the U.S., focusing on research while expanding evidence-based advocacy for effective and equitable policies. They also say the new center will be financed by foundations, private donors, and other sources. I read this to mean that they will be getting significant monies from Michael Bloomberg, his own foundations, and the Joyce Foundation.

The press release goes on to say:

The Johns Hopkins Center for Gun Violence Solutions will focus on prevention strategies that, if implemented broadly, would significantly reduce gun-related death and injury. It will:

“Our Center will continue to apply strong research methods to assess the effectiveness of strategies intended to prevent gun violence,” says Webster. “With our new colleagues, we will now have even more capacity to bring meaningful policy change through evidence-based advocacy.”

“Our biggest successes have come when the evidence meets the moment,” says Horwitz. “Right now is one such moment. This new Center will put the evidence-based solutions identified and developed by our new colleagues directly into the hands of the policymakers ready to make change.”

There are two major implications from this merger. First, the growth of Everytown and Giffords relegated CSGV to being a gun control bit-player with not even marginal influence. The most they could do is stomp their feet, post angry tweets, accuse gun rights activists of being “insurrectionists”, and try to get a dozen people to attend a demonstration.

They just had no future within the gun control industry. According to their Form 990, they were barely covering expenses. They had a little more than a half million dollars in revenue and about the same in expenses of which Joshua Horwitz’s salary consumed about a third. By contrast, Everytown had revenues of approximately $85 million.

The second major implication is that Michael Bloomberg is going to push the supposed public health implications of the criminal misuse of firearms in his attempt to get legislation passed. I don’t think this merger would have happened without the consent, implied or expressed, of Bloomberg. This was not a merger of equals. If anything, it was a takeover that consolidated more of the 501(c)(3) gun control world under his influence while getting rid of a bit-player that could have muddied the message.

In one sense I am sad to see CSGV go away. They provided material for many blog posts with their craziness. You could always depend upon Horwitz to be foaming at the mouth about “insurrectionism” while their former communications director Ladd Everitt could be depended upon for invective about gun rights. I was a “gun extremist” while my friend Kurt Hofmann was branded a “traitor“.

CSGV may be leaving but I still have my commemorative patch!

I was looking to see what the reaction of the gun prohibitionists was to BATFE’s decision to postpone any immediate decision on M855 and their proposed framework. After checking the Brady Campaign’s website and finding nothing, I came to the conclusion that I’d have to start slumming it. Yes, I went to the Facebook page of the Coalition to Stop Gun Violence (sic).

I knew I’d find off the wall comments there and I wasn’t disappointed. However, these comments came from CSGV and not one of their followers who project their own violent tendencies upon us.

When asked why we “prize” green tip bullets, the answer was not because they are cheap or because they are accurate. The official answer was, not unexpectedly, “because of insurrectionism.” And in response to another person who asks why citizens need “armor piercing” bullets, the official answer is to kill law enforcement officers and military service members when we sense “tyranny”.

When I read these answers to the Complementary Spouse, she just looked at me like I was insane and then said, “Are they really that stupid?”

I’m not sure if Ladd is that stupid but I’m sure he would have made a good commissar if he had grown up in Stalin’s USSR.  He certainly is good at spouting the party line no matter how ridiculous it sounds. 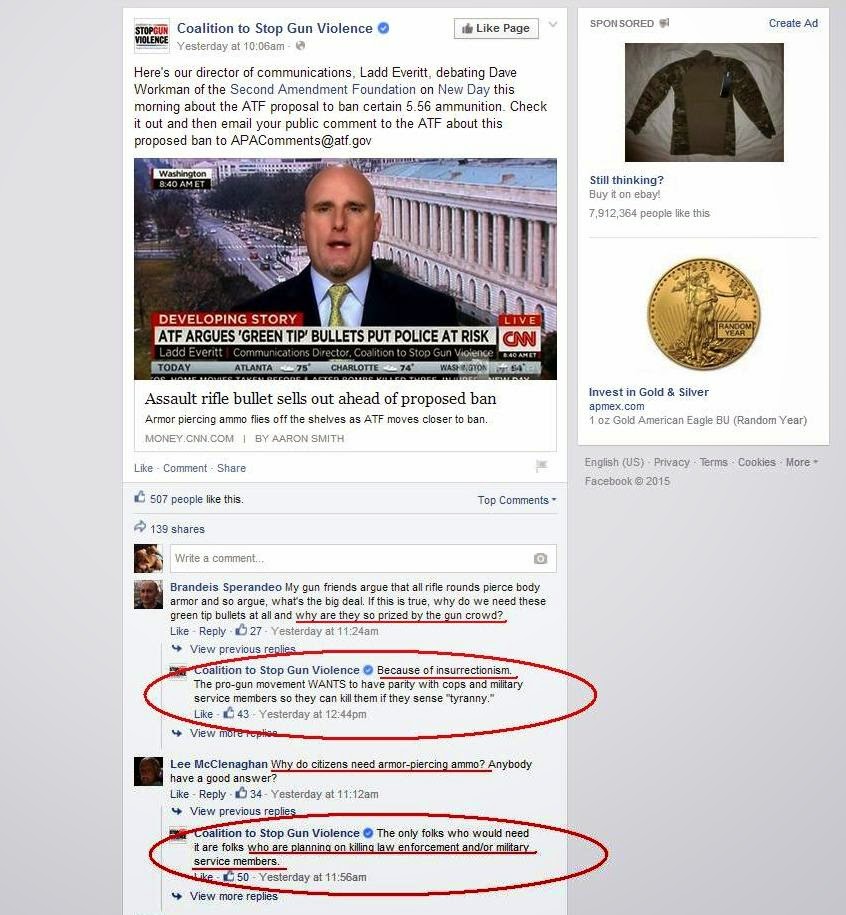 Horwitz is the Executive Director of the Coalition to Stop Gun Violence. In a post today at the Huffington Post entitled NRA’s Latest Poster Boy Sounds Like School Shooter, he insinuates that James D’Cruz is another Columbine killer in waiting. He compares quotes on James’ Facebook page to the stuff said by Dylan Klebold and Eric Harris as well as the Virginia Tech killer Seung-Hui Cho and the Pearl, Mississippi school shooter. He then concludes:

The best case scenario here is that D’Cruz is strikingly immature and incapable of handling the serious responsibilities that come with gun ownership. The worst case scenario is that he’s a ticking time bomb in need of psychiatric care. In either case, he’s a poster boy for why we should prevent handgun sales to those under 21 years of age.

Of course it is utter bullshit and could well be considered an actionable case of defamation.

One could very well rewrite Horwitz’s quote to read:

The best case scenario here is that Horwitiz is strikingly immature and incapable of the rational thought needed for serious policy discussion. The worst case is that he’s a ticking time bomb in need of psychiatric care. In either case, he and Paul Helmke are the poster children for the flailing gun control movement which can be seen in their compulsion to demonize an 18 year-old college freshman.