Last week in St. Louis was spent at the hospital with my mother-in-law. As a result, I didn’t get to comment on some of the issues that came up last week. It is too late to comment on everything that happened but I’d like to mention a couple of things in the “Never Let A Tragedy Go To Waste” category.

By all accounts, Clementa Pinckney was a good and pious man who loved his family and his church community. He was also an accomplished man in that he was elected to the South Carolina State Senate at the young age of 23. While he might have been a politician, he didn’t deserve having the President of the United States turn his funeral into a political attack on guns and the Confederate flag.

For too long, we’ve been blind to the unique mayhem that gun violence inflicts upon this nation. (Applause.) Sporadically, our eyes are open: When eight of our brothers and sisters are cut down in a church basement, 12 in a movie theater, 26 in an elementary school. But I hope we also see the 30 precious lives cut short by gun violence in this country every single day; the countless more whose lives are forever changed — the survivors crippled, the children traumatized and fearful every day as they walk to school, the husband who will never feel his wife’s warm touch, the entire communities whose grief overflows every time they have to watch what happened to them happen to some other place.

The vast majority of Americans — the majority of gun owners — want to do something about this. We see that now. (Applause.) And I’m convinced that by acknowledging the pain and loss of others, even as we respect the traditions and ways of life that make up this beloved country — by making the moral choice to change, we express God’s grace. (Applause.)

The second broader issue is the Confederate flag or, more correctly, the battle flag of the Army of Northern Virginia. To some it is a symbol of slavery and racism. To others it is a symbol of their Southern heritage for which their forefathers fought and died.

My great-great-grandfather Alexander Clay “Sandy” Morgan was a private in Co. K, 34th North Carolina Infantry along with his brothers Anderson and Eli. They both grew up in the northern part of Montgomery County, North Carolina and had enlisted (or more likely were drafted) in March 1863. Their regiment was part of the second wave of troops involved in the ill-fate Pickett’s Charge at the Battle of Gettysburg. Sandy and Anderson survived the war while their brother Eli is reported to have died as a prisoner of war at Point Lookout, Maryland. 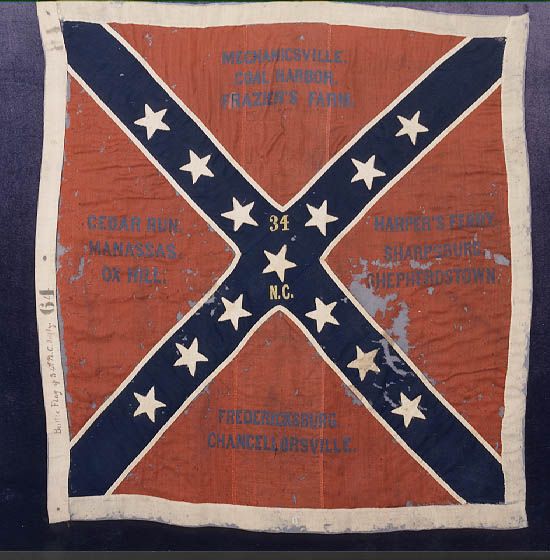 My Grandfather Richardson’s biological father, William Thomas Brewer, reportedly served in the Confederate Navy according to my cousin and family historian Rev. Van Thomas. I am sure there are more relatives that served the Confederacy if I dig deeper.

I have never owned a Confederate flag of any sort. I just haven’t. My mom was a New Yorker whose ancestors didn’t even arrive to this country until after the Civil War (or War of Northern Aggression). As my influence on these things came from my mother, familial ties to the Confederacy were just not emphasized.

Just as important, even though I had ancestors who served in the Confederate Army, the section of North Carolina from which they came was highly anti-slavery and anti-secessionist. This section of the Piedmont is referred to as the Quaker Belt by historians and tended to have many Southern Unionists. My grandfather was a staunch Republican and I surmise his political beliefs were tied to this anti-slavery, Southern Unionist core of thought in southern Randolph and northern Montgomery Counties.

I am sick to death of political correctness, talk of micro-aggressions, and other such nonsense. I am at the point where I’d fly the Confederate flag just out of spite even though I’ve never even owned one in the past.

Perhaps it was just as well that my focus last week was on my mother-in-law and not this stuff.