There have been many creative responses to the Brady Campaign’s politicization of the anniversary of the shootings in Tucson. Yesterday, through the inspiration of Weer’d Beard, many blogger featured pictures of a lit candle and their means of protecting home and hearth. A couple have gone even beyond that.

The first comes from bloggers Joe Huffman and Barron Barnett who produced a video featured Joe’s daughter and members of the Lewiston Pistol Club.

The second comes from blogger Sean Sorrentino who held a counter-protest in Raleigh, NC across from the United Community Church of Christ. His counter protest garnered interviews from both the Raleigh News and Observer – the largest newspaper in eastern North Carolina – and from NBC17.

Sean writes about both of these stories here and here. Sean lives in Wake County which has a population of over 900,000 people. One person with an effective counter protest garners as much attention from the media as approximately fifty from NCGV.

The creative counter protests seem to be irritating the anti-gunners. As Miguel at Gun Free Zone reports, one south Florida anti-gun lefty blogger equates our countering the Brady Campaign’s plea for attention with that of the Westboro Baptist Church. That’s right – since we believe in self-defense and protecting our loved ones – we are branded as racist, ne’er-do-well homophobes. If that pathetic response is the best they can do, we’ve won.

UPDATE: Barron and Joe’s video generated many comments on the CSGV Facebook page including Joan Peterson’s “OMG”. Barron provides an admirable fisking to their comments here. 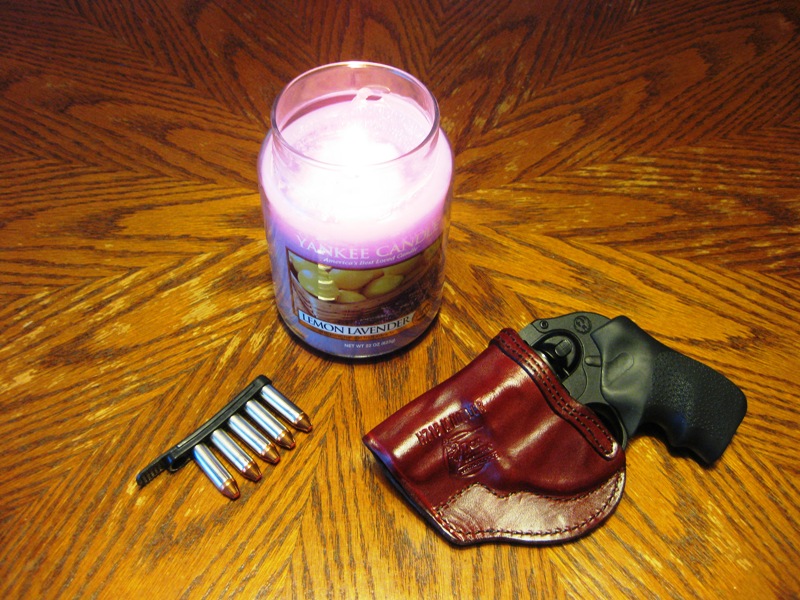 Weer’d Beard made the suggestion that we light a candle to stop violence and show that we have the means to do just that. I heartily concur and here is my entry.

It features my daily carry Ruger LCR loaded with Hornady Critical Defense .38 Special +P in a Don Hume holster, a Speed Strip, and a Yankee Candle Company candle in Lemon Lavender. I understand Lemon Lavender is supposed to have a calming effect.

Weer’d and Miguel have some roundups of other gun bloggers and their counter vigils. Linoge at Walls of the City has some really nice photos of his candles – and firepower to back it up. Finally, Cemetery goes old school with black powder pistols.