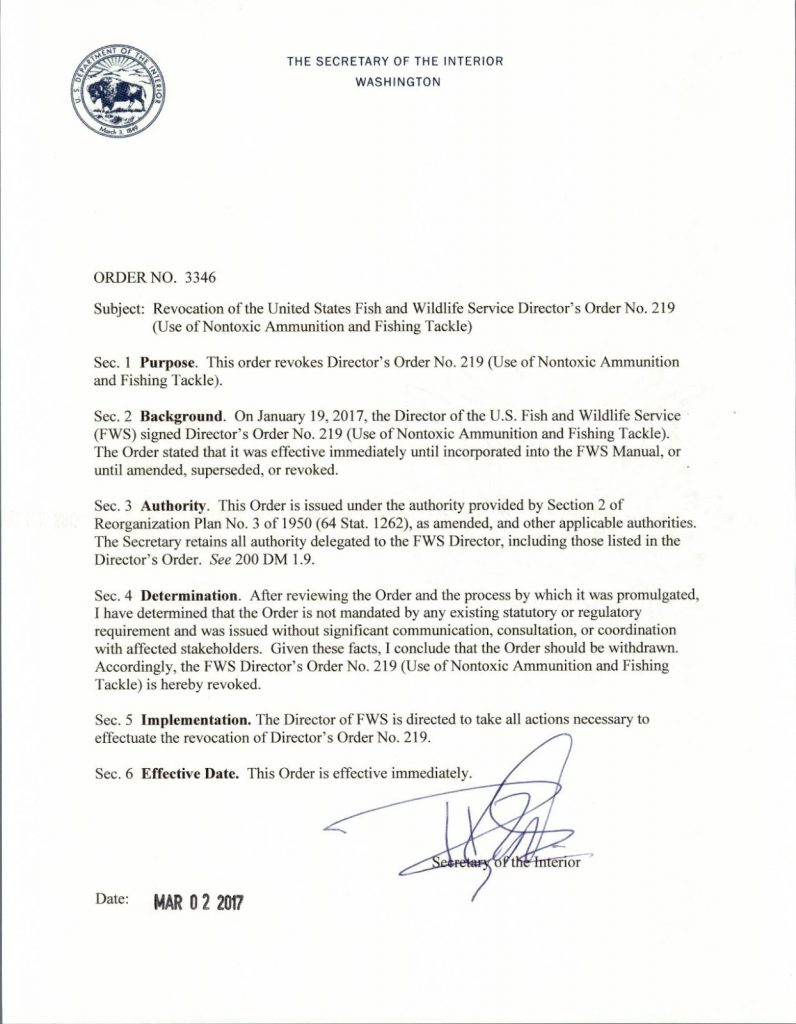 Yesterday was the last full day of the Obama Administration. It did not pass without a last parting shot by the anti-hunting, anti-shooting so-called environmentalists. US Fish and Wildlife Director Dan Ashe issued a Director’s Order that will ban the use of traditional, lead-based ammunition on Federal lands within five years. Thus it gives groups like the Center for Biological Diversity and Project Gutpile a win that they could not achieve in the courts.

Here in western North Carolina, the few public outdoor ranges that we have are on National Forest land. Checking the prices of copper based .223 ammo versus traditional ammo, the cheapest I can find a box of 20 rounds is for about $17 for copper versus about $6 for Tula or $8,.50 for American Eagle. Forcing shooters to use non-lead ammunition will drive up the cost exponentially and drive people from the shooting sports for economic reasons.


The NSSF is crying foul on this move.

The parting shot, Director’s Order 219 , was issued on the final full day of President Obama’s administration. The last-minute action revives an effort the administration undertook eight years ago to ban the use of traditional ammunition.

“This directive is irresponsible and driven not out of sound science but unchecked politics,” said Lawrence Keane, NSSF senior vice president and general counsel. “The timing alone is suspect. This directive was published without dialogue with industry, sportsmen and conservationists. The next director should immediately rescind this, and instead create policy based upon scientific evidence of population impacts with regard to the use of traditional ammunition.”

It also requires creation of a timeline to restrict traditional ammunition for dove and upland bird hunting.

Notice that last bit. They want to ban traditional ammo for dove hunting as well.

I hope this is one order that is rescinded after noon today when the Trump Administration takes office. I certainly hope so.

UPDATE: The Association of Fish and Wildlife Agencies which represents the fish and wildlife departments throughout the 50 states issued a very strong statement disagreeing with Director’s Order 219. They make the point that in the past any sort of move like this would have been a cooperative effort between state and federal wildlife agencies and that the states were caught by surprise by this order.

The Association of Fish and Wildlife Agencies expresses utter dismay with the release of Director’s Order 219, Use of Non-Toxic Ammo and Fishing Tackle, by the U. S. Fish and Wildlife Service (Service) on January 19, 2017. Association President Nick Wiley states that “this action flies squarely in the face of a long and constructive tradition of states working in partnership with the Service to effectively manage fish and wildlife resources.” He adds, “the Association views this Order as a breach of trust and deeply disappointing given that it was a complete surprise and there was no current dialogue or input from state fish and wildlife agencies prior to issuance. It does a disservice to hunters and anglers, the firearms and angling industries, and the many professionals on staff with the USFWS who desire a trusting and transparent relationship with their state partners.” This is unacceptable federal overreach into the states’ authority to regulate the methods of take for sport fish as well as complete disregard for the states’ concurrent jurisdiction with the Service for the management of migratory birds. Further, the economic impacts of this action, which likely will be felt most by rural Americans, is likely to be hundreds of millions of dollars.” The Association looks forward to working with a new Administration in the redress of this poorly timed and executed decision.

A point I didn’t make yesterday with the original post is that this order also impacts anglers as it also includes the phase-out of fishing tackle that includes lead.


I want to emphasize that Dan Ashe’s Director’s Order 219 seeks to accomplish what court battles and petitions to the Environmental Protection Agency from 2010 through 2013 did not – the elimination of traditional ammo and fishing tackle. I foresee that this order will be reversed when Rep. Ryan Zinke (R-MT) is finally confirmed as the Secretary of the Interior.