The Hughes Amendment to the Firearm Owners Protection Act of 1986 banned the possession of machine guns produced after May 19, 1986 except for the police, military, and Class 3 dealers. The impact of that was to make pre-1986 machine guns more valuable. It also meant that you and I will never be able to own something like shown below until, and unless, the law is amended.

I’ve been cruising Instagram the last few days searching for new product introductions that will be seen at the SHOT Show. This morning I came across this .45 ACP subgun from LWRC International that will be shown at SHOT. 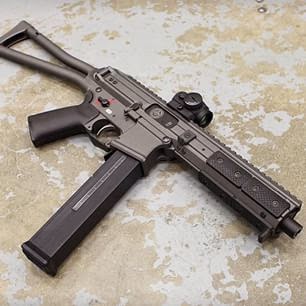 If that doesn’t make you hate the Hughes Amendment, nothing will.

Andrew at the Vuurwapen Blog has a very, very interesting post on this bill and the Hughes Amendment. The Hughes Amendment is the part of the bill that froze the number of machine guns available to be licensed under the National Firearms Act to what existed before this bill was passed.

There’s always been a rumor about it being a late night voice vote that really didn’t have the requisite number of votes to pass, but was ordered to be added anyway.

Now, however, thanks to the detective work of a man who goes by the name AJAX22, we’re finding out that a recorded vote was taken, and the amendment was defeated – but again, it was ordered to be added anyway.

Who was instrumental in this action? None other than Charlie Rangel, then acting as Speaker of the House – the disgraced, corrupt New York congressman who was recently censured on the floor of the House. Are we really surprised that a person of such low “moral caliber” would falsify records to ensure that a law he favored would pass, directly subverting the democratic process? I’m not.

There is some controversy about the vote, the full transcript of which can be found here.

Go to Andrew’s blog and read the whole thing. Even more importantly, follow his links.

Update: There was some confusion about the second vote and I’ve updated the quote from Vuurwapen Blog to reflect that. Also see the second comment below for more of an explanation.