In what can only be described as a brilliant diplomatic move, TSA agents at Jackson-Evers International Airport in Jackson, Mississippi pulled the sari-clad Indian Ambassador to the U.S. out of line for a pat-down. Her Excellency Meera Shankar was in Jackson to deliver a speech at a local university in conjunction with its international studies program. 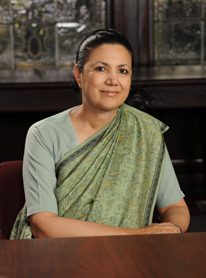 According to a story in the Wall Street Journal, the incident happened this past weekend and the Indian Embassy plans to make a formal complaint to the State Department. The incident is a big story back in India according to reports. The Indians consider the pat-down a breech of diplomatic protocol.

Department of Homeland Security officials said the TSA agents made “right call when they patted down Ms. Shankar.”

There is no word on whether the TSA agents or the DHS officials performed the pat-down in retaliation for being switched to a call center in Mumbai regarding their past due credit card bill.

After the Sepoy Mutiny in 1857, the British rulers of India banned all non-Europeans from owning firearms. It was their way of keeping the Indian people defenseless, if not totally submissive. Even Gandhi, the foremost proponent of non-violence, termed this act “the blackest” of the many misdeeds of the British rule in India.

The Indian Government replaced that law in 1959. Its replacement “granted every citizen the right to bear arms, regardless of race or social standing.” That was then and this is now.

As noted in an article in the Indian newspaper The National,

Along with highly restrictive curbs on the sale of ammunition and the creation of a national database of firearm owners, the new regulations also require gun-licence applicants to prove a “grave and imminent threat” to their lives in order to be approved.

Indian gunowners are outraged and have finally formed The National Association of Gun Rights India (Nagri) to fight for their gun rights. They have patterned it after the NRA. They aim to lobby lawmakers as well as fund legal cases to make it easier to own and carry firearms.

This month the organisation began a membership drive – and in doing so, they have provoked a debate about the role of fire arms in the land of Mahatma Gandhi.

“The bottom line is it’s about freedom,” said Abhijeet Singh, 37, an entrepreneur and one of Nagri’s founders.

“The first line of defence has to be the citizen. It always has been like that, it will always continue to be like that.”

Their opposition, Control Arms Foundation of India (Cafi), takes the same approach as the Brady Campaign and seeks to blame the gun and not the criminal.

But anti-gun campaigners say arming citizens is not the way forward. The Control Arms Foundation of India (Cafi), which was set in up 2004 in response to rising gun crime in the north-east, estimates there are already some 46 million firearms in India, making it the country with the second largest number of guns in civilian hands after the US.

“If I say I am going to protect myself then I exempt the state from doing its job. What India are we living in? This is not some failed state,” said Arundhati Ghose, a former India ambassador to the UN who campaigns for Cafi.

The founder of NAGRI counters that is nonsense. He notes that criminals can get more firepower and be less traceable if they go to the black market.

This is a group that bears watching. It would be nice to see real gun rights come to the second largest country in the world.