Actually, in the news I missed from last week, SCCY Industries is moving from Florida to the foothills of the Great Smoky Mountains in Tennessee.

From the Daily Times in Maryville, TN:

A Florida handgun manufacturer has reached an agreement with Blount Partnership to bring more than 350 jobs to Blount County with an initial $22.5 million investment, constructing a 150,000-square-foot campus to house corporate, research and development and manufacturing facilities.


SCCY founder and CEO Joe Roebuck said during today’s announcement that SCCY needs to expand and it’s “not happening” at its current location in Daytona Beach, Fla., where it employs about 200 people. “We’re at about 40,000 square feet and there’s no room to grow,” Roebuck said, explaining that the biggest problem the manufacturer has there is space and electricity.


Roebuck said his original plan was to expand here, but decided, “Tennessee’s been so great. We’ve got a big piece of land. I’m gonna do it all there.”


“I’m gonna keep a small footprint back in Florida, but I’m moving my headquarters here,” Roebuck said, later explaining, “It’s only going to be an office — maybe some engineering. Ninety-nine percent of the company is coming up here.”

And in something that Michael Bane would appreciate, the story at the link above also included a video of his visit to the SCCY factory in Florida.

The Knoxville News Sentinel produced this video clip of the highlights of the story. They also included this about CEO Joe Roebuck’s expansion plans.

Roebuck employs about 200 in his Florida factory, but plans to move only “a few key people,” maybe a half-dozen, to Tennessee as he gradually shuts down the Daytona Beach facility, he said.

Roebuck said he hopes to start construction on a 75,000-square-foot plant late this year or early next, and begin production in mid- to late 2018. Initially, it will have about 200 employees, hired locally, and SCCY will add 50 to 60 people per year for the following three years, he said.

“Anything from office work to machine operator all the way up to high-level administrator” will be hired, Roebuck said. He also intends to start a paid four-year apprenticeship program.

Roebuck plans a campus of five industrial buildings, plus a “sky lodge” to house visiting industry leaders and gun writers, with an outdoor shooting range, he said.

Given I live on the other side of the Smokies, I think this is a very interesting development. I can see why he picked the the Tennessee side rather than here in North Carolina – no income tax, less expensive land, a (somewhat) Republican governor, and a stronger industrial base than in the Asheville area. With some luck, maybe we’ll see a blogger shoot put on by SCCY Industries similar to what Luckygunner.com did back in 2011. That would be cool.

The Town of Mayodan and the Rockingham County Partnership for Economic and Tourism Development have announced that “an industry-leading firearms company” is considered locating a major facility in Mayodan. The unnamed company will be hosting an open house on June 18th for potential employees. They are trying to find out if there are enough qualified employees to staff the plant. 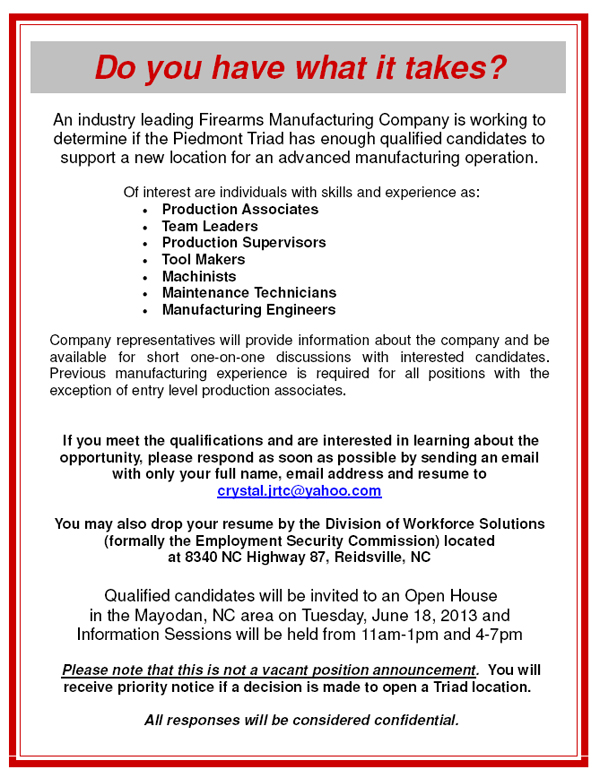 As I posted in mid-May, Ruger had announced at their Annual Meeting that they had narrowed their search for their third manufacturing plant down to North Carolina, South Carolina, and Texas. One of their major requirements was an existing manufacturing facility of approximately 250,000 square feet. Rockingham County has approximately six available facilities that would meet this qualification according to a list from
Rockingham County Partnership for Economic and Tourism Development. Mayodan has two facilities on this list that were former Unifi Textile plants.


Rockingham County is also home to the headquarters of Remington Arms/Freedom Group which has about 200 employees in Madison. However, as WGHP MyFox8 reports, the company considering Mayodan is not Remington.

Officials have not disclosed what the company is, but Graham Pervier, president of the RCPETD, said it is not Remington Arms.

Pervier could not say how many jobs would be created as a result of the possible expansion, but he said it is “a substantial number.”

The company is now working to decide whether the region has enough qualified candidates to support the expansion, Pervier said.

Town officials in Mayodan are quite excited about this possible new company and are strongly urging potential candidates to send their resumes.

“We’re pretty excited about what this could mean for our community,” Mayodan Town Manager Michael Brandt said. “This offers the potential to reuse one of our existing buildings and provide hundreds of much needed jobs for the area.”

Brandt said the amount of support demonstrated in this early candidate screening process would be a major determining factor in the company’s decision on location.

“So we really need people with the right skills and experience to apply as soon as possible,” Brandt said. “There’s a short timeframe here and we want to show the workforce is here and ready.”

Given the relatively hostile climate for gunmakers in Massachusetts and Connecticut, I think it should come as no surprise that Colt’s Manufacturing Company – the civilian side of Colt – announced yesterday that it is setting up a regional headquarters and production facility in Florida. According to the announcement from Florida Gov. Rick Scott’s office, Colt is making a $2.5 million capital investment in a building owned by Osceola County. They expect to have a staff of 63 that will begin phasing in during 2012.

I don’t have a crystal ball but I think this is only the first of many expansions by firearms makers outside of their traditional “Gun Valley” home. I think the moves will be made for two major reasons: a more favorable  (and gun friendly) business climate in the new location and lower personnel costs due to non-unionized workforces. It was only last year that Olin Corporation’s Winchester Division began moving most of its center-fire ammunition production from East Alton, IL to Oxford, Mississippi. That move was done for both those reasons.

I would also keep my eye on announcements out of the state of South Dakota. They have an industrial development project run out of the governor’s office that is targeting firearms manufacturers and others in the gun industry. They promote their gun-friendly attitude as an attraction for businesses in the industry.

The full announcement for the office of Gov. Rick Scott (R-FL) is below:

12/1/2011 Osceola County, Fla. – Today, Colt’s Manufacturing Co. LLC announced its commitment to create 63 jobs in Osceola County for its new regional headquarters and product manufacturing center. The center will hire people for engineering and manufacturing jobs, among others. In 2012, Colt is projected to begin phasing in the first of 63 jobs paying an average salary of $45,060 to be created during the following three years. Governor Rick Scott and Colt’s Manufacturing Company President and CEO Lieutenant General M. William Keys USMC (Ret.) were joined by the Osceola County Board of County Commissioners for the announcement.

“As a supporter of new job creation and the Second Amendment, this announcement sends the clear message that Florida is both open for business and a defender of our right to bear arms,” Florida Governor Rick Scott said. “My primary responsibility as governor is to be our state’s chief advocate for job creation. My personal involvement in bringing Colt to Florida demonstrates my administration’s deep commitment to rebuilding our economy.”

Colt is making a $2.5 million capital investment in a vacant building, which the company will lease, that is owned by Osceola County. Governor Scott and his economic development team at Enterprise Florida Inc. and the Osceola County Economic Development Department worked with Colt to bring this project to fruition. State incentives include $250,000 from the Governor’s Quick Action Closing Fund and funds for workforce training. Osceola County is offering additional incentives, including renovation of the building and rent concessions.

“Colt looked at many possible sites across the nation, but we ultimately decided to locate our new facility in the State of Florida,” Gen. Keys said. “Florida offered a strong pro-business incentive package. Coupled with the low cost of doing business in Florida and a favorable regulatory environment, opening this new facility was very attractive to us. Governor Scott’s personal commitment to both Colt’s growth plan and America’s right to bear arms was instrumental in our decision.”
“Attracting an American icon like Colt, which is one of the world’s top brands, is a real coup for our economic development efforts,” said Commission Chairman John Quiñones. “Beyond creating new, high-wage jobs, Colt is going to be a great asset to our community.”
“Colt’s expansion to Osceola County is a perfect fit for the region,” said Dr. Sanford Shugart, president of Valencia College, which will design a specialized training program for the company. “Valencia College stands ready to deliver the best trained, best educated workforce possible. We welcome Colt’s Manufacturing Company to Osceola County and commit to partnering with them and serving their employees and families for many years to come.”

Osceola County is located southeast of Orlando and just due west of Cape Canaveral.