This was released this afternoon by Deputy Attorney General James Cole and orders the reporting of multiple sales of certain semi-automatic rifles sold in the Southwest. Cole, you may remember, had his nomination held up by Senator Charles Grassley until a deal was reached to allow ATF Acting Director Kenneth Melson to be interviewed by House Oversight Committee staff. Given that Melson came in on his own accord with his own attorney, in hindsight, Cole should have been left in limbo.

“The international expansion and increased violence of transnational criminal networks pose a significant threat to the United States. Federal, state and foreign law enforcement agencies have determined that certain types of semi-automatic rifles – greater than .22 caliber and with the ability to accept a detachable magazine – are highly sought after by dangerous drug trafficking organizations and frequently recovered at violent crime scenes near the Southwest Border. This new reporting measure — tailored to focus only on multiple sales of these types of rifles to the same person within a five-day period — will improve the ability of the Bureau of Alcohol, Tobacco, Firearms and Explosives to detect and disrupt the illegal weapons trafficking networks responsible for diverting firearms from lawful commerce to criminals and criminal organizations. These targeted information requests will occur in Arizona, California, New Mexico, and Texas to help confront the problem of illegal gun trafficking into Mexico and along the Southwest Border.”

This qualifies as one of the “under the radar” moves on gun control by the Obama Administration that was promised to Sarah Brady.

It is now obvious to me that our letters were ignored and that the Obama Administration had no intention of listening. The comment requirement was just to check off an item that was required by law. If you go to the ATF’s website where they had previously published “submissions for public contents, all you will see is a blank page. 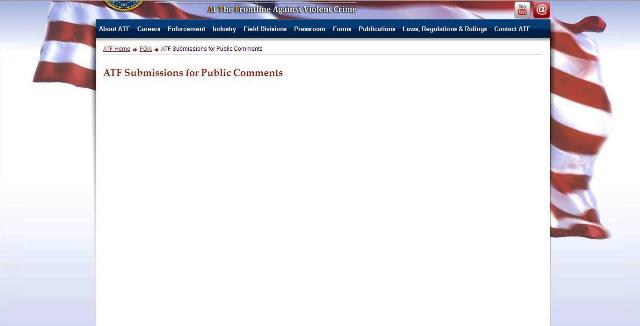 Clearly, this action by the Obama Administration is without legal grounding as Congress granted no such authority in the Gun Control Act of 1968. As one commentator to Instapundit.com said about Brit Hume’s comment that the Obama DOJ reminded him on the Nixon Justice Department:

Fast & Furious is a Nixonian Cover-up? AFAIK no one died because G. Gordon Liddy broke into Watergate. And at least AG Elliot Richardson and Asst AG William Ruckelshaus had the decency to resign when faced with firing Archibald Cox. This lot doesn’t bat an eye at firing an inconvenient Inspector General or honest public servant. I think we can comfortably state that the current administration is more ethically impaired then Richard Nixon’s.

It is time for Congress to get off their ass and pass Sen. Jon Tester’s S. 570 which would prohibit the Justice Department from tracking and cataloguing the multiple sales of shotguns and rifles. The bill has 28 co-sponsors in the Senate which is much more than the average bill. I fear, however, that it will stay bottled up in the Senate thanks to the efforts of Sen. Pat Leahy and Sen. Harry Reid.

I do foresee legal challenges being filed shortly against this directive. Whether it comes from the NRA or the Second Amendment Foundation or another group, one will come.

The decision comes in the middle of a congressional investigation into a bungled ATF gun-smuggling investigation code-named “Fast and Furious.” Many current and former ATF agents said that if the new reporting rule had been in place, it might have prevented the types of mistakes made by the ATF in that investigation.

Of course, that is complete and utter bullshit. The dealers were already reporting these individuals and were told by ATF to go through with the sale. What makes anyone think that the sale still would not have been ordered to go through even with this rule under Operation Fast and Furious? Remember, they were “trying to bring down a drug cartel” and rules don’t matter when you are going for glory.