Are you a new gun owner? Did you purchase a firearm to protect your family due to the pandemic? Are you looking for information about firearms safety?

The Self Defense Radio Network along with the Polite Society Podcast has created a series of short videos dealing with safety, safe storage, proper gun handling, and much, much more. These are intended to help the newbie get some training from highly respected instructors while everything is shut down.

The following video goes over the Four Rules. These were rules for gun safety created by Col. Jeff Cooper many years ago that, if followed religiously, will prevent accidents.

You can find the whole series of videos on YouTube. At last count, there are well over 60 of these short videos with more to come. I will be posting as many as possible over the next weeks and months.

I stumbled across this clip of Col. Jeff Cooper explaining the trigger break to students at Gunsite. It’s worth viewing a few times to help increase your trigger control.

This, by the way, is the same Jeff Cooper who is accused by the hoplophobes at CSGV of being a racist and a misogynist. I don’t have to wonder what he would think of these gun prohibitionists but I do wonder what might happen if they had the balls to make those accusations to his face.

The Educational Fund To Stop Gun Violence, the 503(c)3 arm of the Coalition to Stop Gun Violence, has a website called MeetTheNRA.org. Their goal is to publish (out of context) quotes in an effort to discredit current and former members of the NRA Board as being conservative radicals, racists, and insurrectionists.

The screen cap below is from today in their effort to smear the late Col. Jeff Cooper. 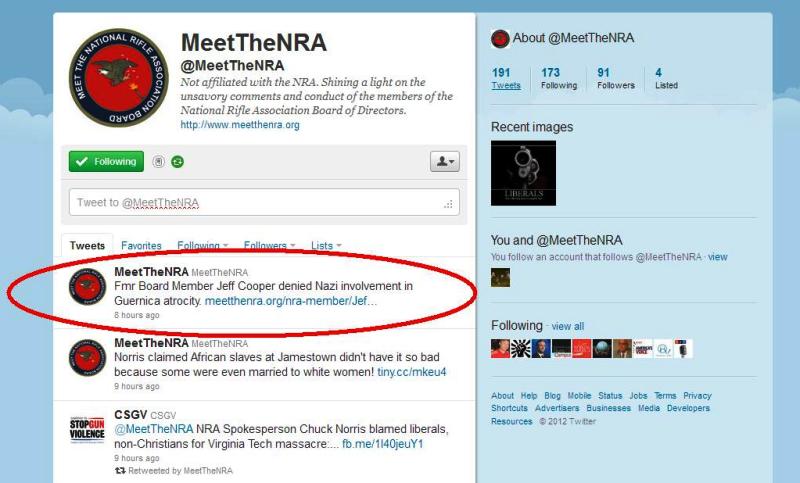 What Col. Cooper actually wrote in his Commentaries, Vol. 4, was this:

Clearly propaganda is more potent than truth. Take this matter of Guernica, for example. Pablo Picasso, one of the more significant propagandists of the left, made a very successful point in claiming that the town of Guernica had been flattened from the air by the German Condor Legion in the Spanish Civil War − this being an atrocity since the town had no strategic value. This point was accepted by the world press, and is now considered a fact, even for inclusion in encyclopedias.

For those who have access to the official records it is clear that the Condor Legion had been grounded for two weeks prior to the occupation of the city by the Nationalist forces. Moreover, the German light bombers did not have the technical capacity for “carpet bombing,” as later practiced by the Allies in Europe. Most conclusive, however, was the fact that there were no bomb craters in the streets. The buildings were pretty well demolished, but this was done from inside them. It is obviously impossible to flatten a town from the air without hitting any of the streets, but now, to the amazement of the well−informed, the German government is proposing to pay an indemnity to Spain for an atrocity never committed. Such goings on!

Now Col. Cooper served as an officer in the US Marine Corps during both WWII and the Korean Conflict. Moreover, he had a graduate degree in history to complement his undergraduate degree from Stanford in political science. I happen to think that a military officer, especially one trained as a historian, is somewhat more likely to have seen the official reports and to have made sense of them than a hoplophobe like Ladd Everitt who wasn’t even born when Kennedy was killed.

Now I will acknowledge that there is a significant difference of opinion about what really happened at Guernica especially among historians so the Colonel could be wrong in his assessment. Jeff Cooper was reputed to be a man of strong opinions, somewhat cranky and irascible, but brilliant nonetheless. If he were alive today, the intellectual flaying he would have given the small-minded gun prohibitionist hoplophobes at the Educational Fund to Stop Gun Violence and CSGV would have been a thing of beauty. It is a pity he didn’t live long enough to apply it.

I received an email from Ruger a couple of hours ago announcing their new Gunsite Scout Rifle. This is the rifle that Ruger should have introduced when they first came out with their M77 Frontier a few years ago.

The Gunsite Scout Rifle is based upon Col. Jeff Cooper’s scout rifle concept. It is a bolt-action .308 rifle with a 10-round detachable box magazine. The rifle features the integral forward scope mount typical of all scout rifles along with a ghost ring rear sight and a Mini-14 style protected front sight. It also have a flash suppressor with standard 5/8-24 muzzle threads allowing the use of other .30 caliber accessories such as different flash suppressors, muzzle brakes, or a sound suppressor.

The only thing I see missing is the third sling stud for the requisite Ching sling from Andy Langlois. Ed Head at Gunsite had this to say about it according to the Ruger press release:

“Ruger has taken an in depth look at the intended purpose of a Scout Rifle and developed a full-featured rifle designed to meet the Scout Rifle criteria of hunt, fight, defend,” says Head. “This firearm offers outstanding features in an affordable, versatile and reliable rifle designed to deliver .308 Winchester performance in a variety of situations. It is compact, lightweight, offers 10-round box magazines, can be fit to the individual shooter, and accommodates a host of optics. It is a serious rifle for those serious about rifles.”

I may not buy this rifle as I have the Ruger M77 Frontier which I have been slowly building up over of the years. If I had to do it over again, I’d go with this. Heck, I still might do it!

UPDATE: Michael Bane has a long blog post about the rifle and his impressions on shooting it out at Gunsite. He is buying one.

UPDATE II: DownRange TV has put up two videos on the new Gunsite Scout Rifle. The first includes an interview with the Colonel himself and the second continues the discussion with Dave Spaulding on how this rifle came to be.