The New York Times ran an unsigned editorial on Nov. 21, 2013 entitled “Democracy Returns to the Senate.” In light of the events of yesterday in the Senate where the Republicans invoked the “nuclear option” and just this morning confirmed Neil Gorsuch as the newest Associate Justice of the US Supreme Court, I thought a little re-writing was in order. My changes are in bold.

For five years This year, Senate Republicans Democrats have refused to allow confirmation votes on dozens of perfectly qualified candidates nominated by President Obama Trump for government positions. They tried to nullify entire federal agencies by denying them leaders. They abused Senate rules past the point of tolerance or responsibility. And so they were left enraged and threatening revenge on Thursday when a majority did the only logical thing and stripped away their power to block the president’s nominees.

In a 52-to-48 vote that substantially altered the balance of power in Washington, the Senate changed its most infuriating rule and effectively ended the filibuster on executive and judicial Supreme Court appointments. From now on, if any senator tries to filibuster a presidential nominee, that filibuster can be stopped with a simple majority, not the 60-vote requirement of the past. That means a return to the democratic process of giving nominees an up-or-down vote, allowing them to be either confirmed or rejected by a simple majority.


The only exceptions are were nominations to the Supreme Court, for which a filibuster would still be allowed. But now that the Senate has begun to tear down undemocratic procedures, the precedent set on Thursday will increase the pressure to end ended those filibusters, too.


This vote was long overdue. “I have waited 18 years for this moment,” said Senator Tom Harkin Charles Grassley, Democrat Republican of Iowa.

Republicans Democrats warned that the rule change could haunt the Democrats Republicans if they lost the White House and the Senate. But the Constitution gives presidents the right to nominate top officials in their administration and name judges, and it says nothing about the ability of a Senate minority to stop them. (The practice barely existed before the 1970s.) From now on, voters will have to understand that presidents are likely to get their way on nominations if their party controls the Senate.

Democrats Republicans made the filibuster change with a simple-majority vote, which Republicans Democrats insisted was a violation of the rules. There is ample precedent for this kind of change, though it should be used judiciously. Today’s vote was an appropriate use of that power, and it was necessary to turn the Senate back into a functioning legislative body.

Not surprisingly, the New York Times has no unsigned editorial praising the Republicans for getting rid of cloture votes on Supreme Court nominees. The filibuster isn’t gone – you just have to do it the old fashioned way which involves a beach ball sized bladder and a lot of stamina.

What has surprised me the most in this whole episode was that Majority Leader Mitch McConnell (R-KY) actually had the cojones to go nuclear. For a Republican whose spine seems to be made of Jello, that was remarkable.

With the confirmation hearings of Judge Neil Gorsuch coming to a close, Minority Leader Sen. Chuck Schumer (D-NY) has announced that he will oppose the confirmation and will encourage his fellow Democrats to filibuster the vote.

In announcing his confrontational approach, Schumer said that Gorsuch “was unable to sufficiently convince me that he’d be an independent check” on Trump. Schumer said later that the judge is “not a neutral legal mind but someone with a deep-seated conservative ideology,” hand-picked for Trump by conservative legal groups.

Thomas C. Goldstein, a Supreme Court practitioner and co-founder of SCOTUSblog, said that Democrats on the Senate Judiciary Committee did not present a compelling case that Gorsuch was either an illegitimate nominee or that he was outside the conservative mainstream.

“None of the Democrats set the table” for a filibuster, Goldstein said. He speculated that one option for some Democrats would be to allow an up-or-down vote, and then to vote against confirmation.

In addition to Schumer, Sens. Thomas R. Carper (D-Del.), Robert P. Casey Jr. (D-Pa.) and Ron Wyden (D-Ore.) announced Thursday that they would filibuster Gorsuch. Casey is one of 10 Democratic senators running next year in a state that Trump won.

While I have serious doubts about the spine of Majority Leader Mitch McConnell (R-KY), I think his only proper response to Schumer’s threat to filibuster the nomination of a supremely qualified candidate like Judge Gorsuch is this.

“Nuke’em back to the Stone Age!” or at least back to 1917 when cloture of filibusters was first introduced.

While it is a misquotation of Gen. Curtis LeMay, it still has a resonance to it. Those ten Democrats who represent states carried by President Trump may want to heed the warning implied by that threat.

Another threat those Democrats may want to pay attention to came from Chris Cox of the NRA-ILA. Cox sent a letter to McConnell and Schumer  on March 17th saying that Judge Gorsuch has the full backing of the NRA and that they will be scoring the vote on his confirmation. If senators such as Heidi Heitkamp (D-ND) or Joe Donnelly (D-IN) don’t think the NRA won’t go full scorched earth on them if they vote against Judge Gorsuch, then they are living in a Beltway induced dreamworld.

Sen. Dianne Feinstein (D-CA), ranking member of the Senate Judiciary Committee and ardent gun prohibitionist, got her chance to question Judge Neil Gorsuch on the Heller decision. She tried to corner him on it. She lost.

As Judge Gorsuch says in his testimony below, Heller is the law of the land.

I do have to disagree with Judge Gorsuch on one thing. I don’t think Judge J. Harvie Wilkinson is a very fine judge nor do I think Judge Wilkinson respects the Supreme Court’s ruling in the Heller decision. Wilkinson is a member of the Virginia gentry, who I suspect, thinks that the problem with the Second Amendment is that it allows the riff-raff to own guns. That riff-raff is you and me, the non-prep school, non-Yalie, non-son of a banker sorts who actually have the temerity to believe that the Second Amendment means what it says.

Sen. Tom Udall (D-NM) is floating a plan where one of the sitting justices of the Supreme Court retires, President Trump appoints Judge Merrick Garland to that seat, and the Senate would then confirm Judges Gorsuch and Garland at the same time.

“You had President Trump saying, ‘I want to unite the country, I’m a deal-maker, I’m going to bring people together,’” Udall told reporters following his meeting with Gorsuch on Monday. “Well, the deal right now for President Trump, if he wanted to do it, would be to put Gorsuch and Merrick Garland on the court at the same time.”

This is how Udall described it: Trump would discuss the option with one of the three Supreme Court justices often mentioned as retirement prospects in the coming years – Ruth Bader Ginsburg, Stephen Breyer or Anthony Kennedy – and secure a resignation letter from one of them, contingent on Garland getting nominated and confirmed as their replacement.

Then the two nominees would have a simultaneous confirmation process and votes, Udall said.

Has Udall been sneaking up to Colorado to visit brother Mark (former US Senator Mark Udall (D-CO) and then partaking of some of Colorado’s best weed?

The answer President Trump should give Sen. Udall is an unequivocal no. Both surveys and my own anecdotal evidence suggest that the primary reason many people voted for Trump over Hillary Clinton was the Supreme Court and court appointments. The era of the GOP making deals with liberal Democrats on judicial appointments is over.

We have just seen the impact of President Obama’s appointments on gun rights in the 4th Circuit with their nonsensical ruling in Kolbe v. Hogan. We need that sixth originalist justice if we want to preserve the Second Amendment as an individual right and as a right that the courts will actually respect. Judge Merrick Garland is not that man.

The NRA-ILA reacted very quickly to the nomination of Judge Neil Gorsuch to be the next Associate Justice of the Supreme Court. They released a statement within minutes as well as this graphic which was placed on Instagram.

“President Trump has made an outstanding choice in nominating Judge Gorsuch for the U.S. Supreme Court. He has an impressive record that demonstrates his support for the Second Amendment,” said Chris W. Cox, executive director, NRA-ILA. “We urge the Senate to swiftly confirm Judge Gorsuch to the Supreme Court, just as it did in confirming him to the U.S. Court of Appeals for the Tenth Circuit by a unanimous voice vote.”

During his tenure on the Tenth Circuit, Gorsuch has demonstrated his belief that the Constitution should be applied as the framers intended. To that end, he has supported the individual right to self-defense. Specifically, he wrote in an opinion that “the Second Amendment protects an individual’s right to own firearms and may not be infringed lightly.”

“On behalf of our five million members, the NRA strongly supports Judge Neil Gorsuch’s confirmation to the U.S. Supreme Court. We will be activating our members and tens of millions of supporters throughout the country in support of Judge Gorsuch. He will protect our right to keep and bear arms and is an outstanding choice to fill Justice Scalia’s seat,” concluded Cox. 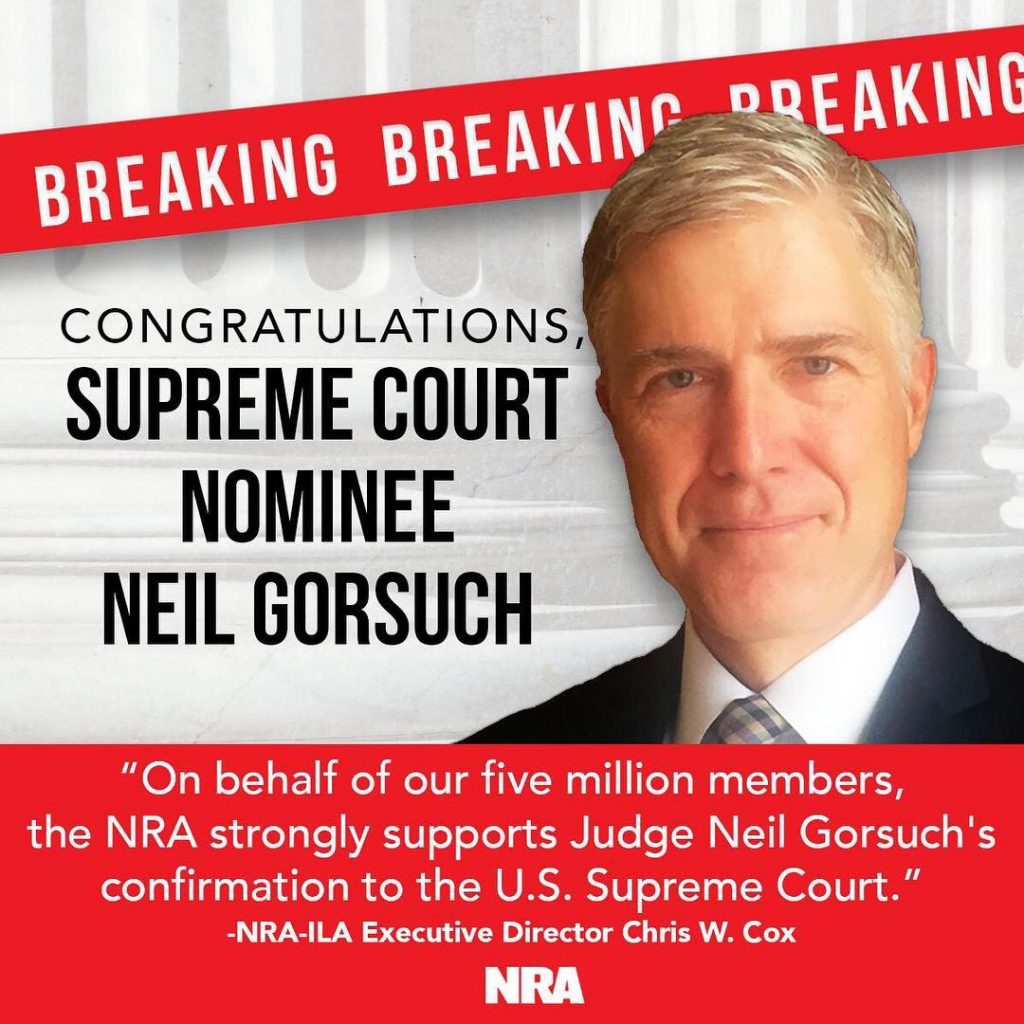 We will need the NRA going all in for Judge Gorsuch as the battle lines were being drawn in minutes. The NY Times had an editorial out within minutes calling it a “stolen seat” and Merrick Garland “better qualified”. I’m sorry but mere tenure on the bench does not make you a better judge or better legal mind. It only means you are older.