The New York Daily News is not a fan of the NRA. They have made that very clear over the years. They make that very clear when they refer to the NRA’s defunct CarryGuard insurance program as “murder insurance”.

The context was that investigators with the New York Department of Financial Services served a subpoena upon NRA Executive VP Wayne LaPierre. They want to know what Wayne knows or knew about the marketing of CarryGuard. It should come as no surprise that New York officials would want to put Wayne on the record with a sworn deposition.

I can think of a number of reasons that they would do this. They would include harassment, payback for the Federal suit against Gov. Cuomo and former DFS head Maria Vullo, an opportunity to catch Wayne in a lie, and the list goes on.

What struck me about this article was this:

The gun-rights group’s top lawyer said it was “surprised” by the subpoena and noted that LaPierre has “virtually no information” beyond what others have already told investigators.

“The NRA believes the ‘investigation’ was blatantly political in its motivation,” said William A. Brewer III, lead counsel to the NRA, in a statement. “Nonetheless, the NRA has attempted to cooperate with reasonable requests by (New York).”

Any competent attorney should have expected this subpoena. To be surprised by what should have been a foregone conclusion indicates either Brewer is incompetent or that he is trying to create a smokescreen. I know which way I’m leaning but for the moment I’ll reserve judgement.

Yesterday, Ladd Everitt, Director of One Pulse for America and formerly the communications director for Coalition to Stop Gun Violence (sic), had an op-ed in the New York Daily News urging the city to repeal its handgun transport ordinance. This is the same Ladd Everitt who delighted in portraying those of us in the gun culture as “insurrectionists” and leading demonstrations outside NRA headquarters that attracted about a dozen protesters.

A ruling in NYSRPA vs. NYC could overturn not only the city’s gun transport reg, but also “may-issue” laws governing concealed carry of firearms in public in New York and seven other states. Carry licenses are more difficult to obtain than premises licenses in NYC. Law enforcement officials have discretion to deny carry licenses to applicants with a history of violence. The NRA spent $1 million to get Kavanaugh confirmed to the Supreme Court because they believe he will provide the decisive fifth vote to eliminate such discretion by declaring a new, individual right to carry guns in public.


New York City leaders don’t have to fall into the trap the NRA is baiting for them. It is within the authority of NYPD Commissioner James O’Neill to revise or repeal the regulation at the center of NYSRPA vs. NYC. If he took this step (conceivably with the blessing of Mayor de Blasio) and cleared the way for premises licensees to transport secured firearms to locations outside the city, the plaintiffs’ stated grievance would be remedied. The Supreme Court might decide to drop the case before ruling on it.

Ladd may be an asshole but he isn’t dumb. He realizes the danger to the gun control lobby if the Supreme Court rules against New York City which they probably would in all likelihood. In addition to his concerns about may-issue concealed carry permits, the Supreme Court could finally clarify the standard to be used by lower courts in deciding Second Amendment cases. If they said it must be strict scrutiny and they backed this up by taking cases where courts applied intermediate scrutiny, it would open the door to a large round of 2A litigation.

Mayor Adrian Fenty of the District of Columbia was sure of the rightness of DC’s ban on handguns. He decided that DC would appeal their loss in the Court of Appeals in the Heller case to the Supreme Court. We know that turned into DC v. Heller and a recognition that the Second Amendment was an individual right.

It’s true that allowing New York City residents to transport guns outside the city would entail certain public safety risks, even if the practice was regulated. But with the gun violence epidemic increasing in the United States, our communities simply cannot withstand newfound constitutional protections for violent “good guys with a gun.” Now is the time for the NYPD to step up and protect all Americans by repealing NYC’s gun transport ordinance.

I love Ladd’s hyperbole even when he is way off base. The problem isn’t with honest citizens who own a firearm, perhaps have a carry permit, and who engage in armed self-defense. The problem is with violent criminal actors (to use Dr. William Aprill’s phrase). They view gun laws as something to be ignored just like they ignore the laws dealing with theft, assault, and homicide.

When you see a Michael Bloomberg, a Shannon Watts, or one of the Brady co-presidents calling for New York City to ditch this law and moot the NYSRPA case, then you will know the gun control lobby is really running scared. Coming as this op-ed does from the periphery of the gun control lobby, it is a sign that some are awakening. I just hope the rest continue along with their smug, elitist attitudes thinking that they can’t lose.

There are things that the US Government doesn’t want discussed in open court and Operation Fast and Furious is one of them. This is true even in a criminal trial against a cartel boss. The cartel boss is question is Joaquin Archivaldo Guzman Loera aka El Chapo of the Sinoloa Cartel. Perhaps I should say that the government especially doesn’t want to have any discussion of Operation Fast and Furious in a case involving the cartel which received the firearms.

Guzman was extradited to the United States in 2017 and is now on trial in US District Court for the Eastern District of New York. Judge Brian Cogan, a George W. Bush appointee, is the presiding judge in the case. Guzman’s attorney is A. Eduardo Balarezo. He is a criminal defense attorney who handles Federal cases involving high profile defendants like Guzman. The prosecution team is headed by Richard Donoghue who is the US Attorney for the Eastern District.

The government has filed a motion in Limine to exclude questioning about Operation Fast and Furious. They are contending it will confuse the jury and prejudice the government’s case against Guzman.

The defense strategy is transparent. Given the substantial number of articles
that have been written about the Operation, many of which criticize the government’s handling
of the movement of weapons from the United States into Mexico, the defense is attempting to
use the well-known operation to place the government on trial. While the government will
seek to introduce at trial seized weapons that had been identified by ATF agents within the
scope of the Operation,1 any details about the Operation itself are completely irrelevant to the
issues at trial under Rule 401 of the Federal Rules of Evidence and should be excluded on
those grounds alone. To the extent that the details of the Operation are in any way relevant,
pursuant to Federal Rule of Evidence 403, any minimal relevance would be greatly outweighed
by the substantial risk of misleading the jury and unfair prejudice against the government.


The government respectfully seeks a ruling at this time precluding any further
mention of the Operation, and in so doing, incorporates by reference its previous arguments in its Motions in Limine, Dkt. Nos. 213, 326. In light of the extensive reporting on the Operation,
repeated references to the Operation in defense cross-examination questions create a
substantial risk of tainting the jury, even if government objections to the questions are
sustained by the Court and the witnesses are not required to answer the objectionable questions.

The New York Daily News is reporting on the trial including the motion by the government to exclude this information. Like most of the mainstream media, they are still referring to it as a “botched sting” operation. As Kurt Hofmann wrote over seven years ago, the only thing botched was the cover-up. It was true then and it is still true today.

The New York Daily News – “New York’s Picture Newspaper – is keeping up their propaganda campaign against the NRA and Republicans for refusing to add those on the FBI’s Terrorist Screening Database to the NICS denied list. 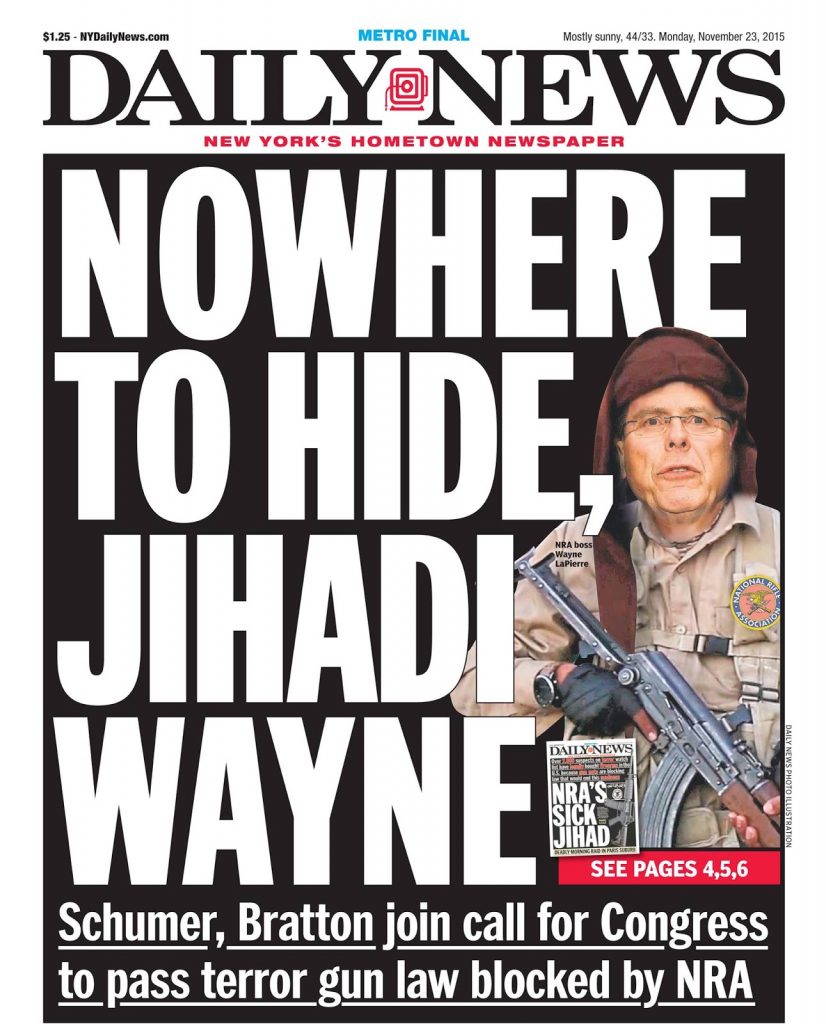 They are now reporting that NYPD Police Commissioner William Bratton and Sen. Charles Schumer (D-NY) are supporting efforts to add those on the “No-Fly” list to the NICS denied list. What they are forgetting is that the FBI still runs a check on everyone who buys a gun through a FFL.

As Bratton made clear yesterday on NBC’s Meet The Press, he is more worried about people put on a list for some unknown and ephemeral reason buying a gun than he is about ISIS using Syrian refugees to smuggle in jihadis into the United States. Clearly one does not get to be the commissioner of police without bowing to one’s political masters.

The editors of the New York Daily News are all bent out of shape by the new president of the National Rifle Association, Jim Porter. It seems that they take exception to his use a Southern euphemism for the American Civil War.


Elected on the eve of the NRA’s annual convention, set to start Friday in Houston, James Porter
takes over as its president with a long record of Second Amendment
absolutism, conspiracy theory looniness and racial repulsiveness.

What they term racial repulsiveness is Mr. Porter’s use of the euphemism – the War of North Aggression. Given that Mr. Porter is from Alabama, it is one of those tongue in cheek expressions often used as an alternative name for the Civil War just like War Between the States and, the even more genteel, The Late Unpleasantness”.

I guess the editors of the Daily News forget their city’s own little bit of racial repulsiveness during the Civil War – the Draft Riots of 1863.

Initially intended to express anger at the draft, the protests turned into an ugly race riot, with the white rioters, chiefly Irish immigrants, attacking blacks wherever they could be found. At least 100 black people were estimated to have been killed. The conditions in the city were such that Major General John E. Wool, commander of the Department of the East, stated on July 16, “Martial law ought to be proclaimed, but I have not a sufficient force to enforce it.” The military did not reach the city until after the first day of rioting, when mobs had already ransacked or destroyed numerous public buildings, two Protestant churches, the homes of various abolitionists or sympathizers, many black homes, and the Colored Orphan Asylum at 44th Street and Fifth Avenue, which was burned to the ground.

As to that conspiracy theory looniness, they are speaking of the UN’s Arms Trade Treaty in which Mr. Porter’s comments have been spot on.