As most people know by now, Jeff Quinn of GunBlast.com passed away on Monday. His down-home – and honest – reviews of firearms were in distinct contrast to the type of reviews you often got in the gun mags.

Here is a round-up of obituaries.

From the funeral home:

A graveside service will be held at 8:30 am on Saturday, August 1, 2020 at Stewart County Memorial Gardens and a celebration of life will follow at the Carlisle Missionary Baptist Church.

From Kat Ainsworth at TTAG which includes a number of comments from people who knew and worked with Jeff:

He was one of those rare men everyone liked. Whether it was his somewhat twisted sense of humor or his country-boy-turned-biker-turned-gun-reviewer charm, you liked him. He was readily identifiable by the twin braids in his beard; if you ever saw him attempting to cross the floor at NRAAM you know he was constantly swarmed by fans of his work in the gun world.

And when I say we are diminished by his passing, I am not spouting platitudes. We are diminished. The gun industry is lessened by his death. The day of this writing – July 27, 2020 at approximately noon central – we lost Jeff Quinn of GunBlast.com.

Jeff’s passing does not come as a surprise. He’d been fighting kidney failure for years, searched for a donor, gone through dialysis, and suffered complications to his heart and other organs. But somehow, every time we heard he was in the hospital and we expected the worst, he prevailed.

From Jim Shepherd of the Outdoor Wires:

Those three words on Monday rattled me more than any news I’ve gotten in quite a while. Jeff and I had been to a number of gun writer-type events together over the past few years, but it was the time with him away from the “events” that endeared him to me.

He was self-deprecating, unapologetic about his faith, fiercely loyal to his friends, and dedicated to his family.

He also managed to be one of the funniest, and most authoritative voices in the firearms news business. His Gunblast features combined genuine information with authentic entertainment.. sometimes intentional.

And, finally, from his brother and collaborator in GunBlast.com, Boge Quinn, the most heartfelt obituary.

Jeff Quinn of GunBlast.com passed away today according to multiple reports. I don’t know the circumstances yet but will update this later. He had health issues in recent years including diabetes.

Jeff knew his guns and did excellent reviews of them on his GunBlast.com. I featured his reports from the SHOT Show many a time as they were great.

He will be missed.

Below is the obituary for Joe Tartaro posted on the funeral home’s website. There is nothing yet on his local Buffalo, NY newspaper.

June 13, 2020, age 89. Beloved husband of 63 years to the late Patricia B. (nee Burke) Tartaro; loving father of Mark J. (Dolores) Tartaro, Patricia M. “Peggy” Tartaro and Bridget F. (Laura Gorman) Tartaro; cherished grandfather of Marc (Anne), Deanna (Mike) and Joseph M.; adored great-grandfather of Kyle, Kiki and Hailey; caring brother of the late Vincent, Salvatore (late Ann), Pierina and Zena Tartaro; also survived by nieces and nephews. Joseph was a former Ad Executive for Tartaro Advertising and Former President and Editor of the Second Amendment Foundation. Arrangements by the AMIGONE FUNERAL HOME, INC. Services will be held privately and at the convenience of the family. Donations in his name may be made to the Second Amendment Foundation (saf.org) or The Buffalo and Erie County Library. Please share memories and condolences with the family at www.AMIGONE.com.

Bob Owens’ obituary has been published. Over and above his friends in the gun culture, he leaves behind a wife, two daughters, and his parents. In other words, he left behind a lot of folks who loved him.

The Bob Owens Family and College Fund has been set up on GoFundMe. It has raised a little over $27,000 in the last two days. The goal is an ambitious $250,000 and it is going to take a lot more donations to hit the goal. I have donated. If you liked and respected Bob’s work. I’d encourage you to do the same.

Professor Brian Anse Patrick passed away on Tuesday from cancer at the all too young age of 62. He was a Professor in the Department of Communication at the University of Toledo, author, CHL instructor, and gun rights advocate. He held a PhD in Communications Research from the University of Michigan. He was a speaker at a number of Gun Rights Policy Conferences and at the National Firearms Law Seminar. 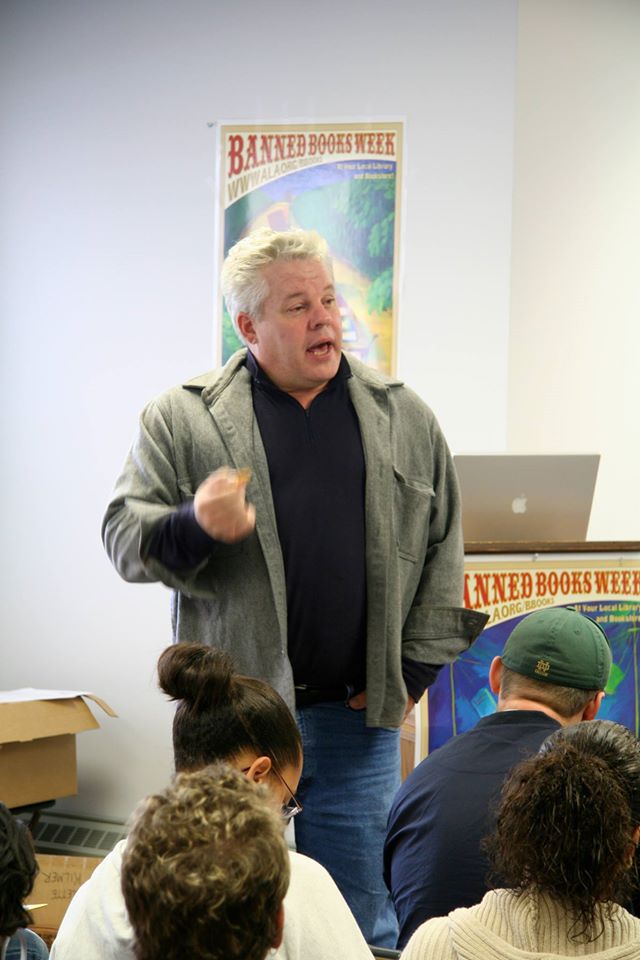 Among his better known works were The National Rifle Association and the Media: The Motivating Force of Negative Coverage, The Ten Commandments of Propaganda, and Rise of the Anti-Media: In-Forming America’s Concealed Weapon Carry Movement. This last book examined how the gun culture used its own media systems (or anti-media) to push shall-issue concealed carry outside of the view of the established media and the gun control organizations.

Dave Hardy, calling him a brilliant mind and a good man, noted that his work on the NRA and the media created objective measures showing that the more negative publicity the NRA received, the greater the growth in membership.

I cannot find any “official obituaries but this one from John Morgan announcing Dr. Patrick’s death on Facebook sums it up well.

It brings me great sadness to report that Brian Anse Patrick, pictured here with a great elk that he took down in Montana in 2010 (his favorite activity of all), known to many as the author of numerous books published by Arktos and elsewhere, as a Professor of Communication at the University of Toledo, as a championship target shooter and advocate for gun rights, as a CCW permit instructor, as well as through his many lectures and interviews on the subjects of propaganda and the American gun rights movement, passed away after suffering from cancer on the night of December 26/27 at the all too premature age of 62. As generous a soul as there has ever been, many of us who knew him can attest that our lives were made better through our friendship with him. Brian helped me through many rough patches of my own life over the course of nearly 20 years with his sage counsel and indefatigable drive to help his friends, as well as with his astute wit, which was matched only by the sharpness of his marksman’s eye. He was also the one who first taught this city boy how to shoot and appreciate the outdoors at his estate in northern Michigan, a true refuge from the ravages of the modern world where we would be regaled with tales of his wild youth and philosophically plumb the depths of life, the universe, and everything while quaffing the finest spirits. One who never suffered fools or those who were slaves to the bureaucratic mentality gladly, but who always nourished intelligence and talent, he was certainly the most fiercely independent individual I have ever known in both mind and action, and a man who benefited from a lifetime of wide reading and love of good books, and one who loved animals of all kinds. I also never knew anyone else who could throw together a meal in half an hour from whatever was lying around his kitchen and have it taste like the best thing you’d ever eaten on every single occasion – and never be the same twice. His story, rising from a ne’er-do-well problem child with a GED to become a tenured professor, should be an inspiration to those who see academia as closed to the unconventional. He was representative of an archetypal type of primordial American who is becoming all too rare in America today. He was free in the most genuine sense of the word. His wise words will continue to echo in my mind for the rest of my life. Brian, wherever you are now, you won’t be forgotten.

UPDATE:  The provost at the University of Toledo released this message regarding Dr. Patrick’s death.

Dear UT Colleagues,
It is with great
sadness I share with you that we have lost a trusted faculty and member
of our University of Toledo family. Brian Anse Patrick, PhD, professor
of communication, lost his battle with cancer
on December 26, 2016.
Brian began his
career at UT in 2000. He taught both undergraduate and graduate courses
in research methods, group communication, propaganda and persuasion. He
was a nationally recognized expert on American
gun culture and was frequently invited to speak at events and symposia.
Further, he was the author of five books and numerous scholarly
articles, and enjoyed engaging students in open dialog.
We offer our sincere
condolences to Brian’s family and friends and share in their grief. He
will be deeply missed by our entire UT community. Please keep them in
your thoughts during this time of loss.
Andrew T. Hsu
Provost and Executive Vice President for Academic Affairs
The University of Toledo

Marshall J. Brown was a reporter from a time when reporters were reporters and not journalists. According to his obituary in the Buffalo News, he passed away yesterday after an extended battle with multiple system atrophy, a neurological disease. He was 78 and had spent much of his career as the police beat reporter for the old Buffalo Courier-Express.

Mr. Brown came from a newspaper family. His father and two uncles were editors with United Press International (UPI). He started out as a copy boy with the old NY Herald-Tribune, received a degree in journalism from New York University, and began his career at the Lockport (NY) Union-Sun & Journal.

His obituary states that he received a number of awards from the Associated Press for his reporting. These awards, however, were not his most prized awards. He reserved that for his James Madison Award For Journalism from the Second Amendment Society.

A fellow reporter from a competing newspaper had this to say about Mr. Brown:

“Marsh was a feisty, hard-nosed old-time newsman, like one of the characters you’d see in an old movie like ‘The Front Page,’ ” said Buffalo News reporter Dan Herbeck, who worked with Mr. Brown at Buffalo Police Headquarters in the late 1970s and early 1980s. “He carried a gun when he was on the job, sometimes beat the police to crime scenes. On more than one occasion, he conducted his own investigations and helped the police solve crimes.”

Herbeck said he will never forget the time he and Mr. Brown in 1982 – both police reporters for Buffalo’s two competing newspapers – decided to go out and have lunch together. They were walking toward a small diner when a waitress came running outside, spattered with blood and screaming, “Help, he killed Ellie!”

“Marsh grabbed his gun out of the holster and we went running inside. This poor waitress was on the floor, bleeding to death,” Herbeck recalled. “A mental patient who had recently been released from a psychiatric center had jumped over the counter, grabbed a knife and began stabbing this poor woman. Then he ran out of the place. Marsh and I ran outside, looking for the guy, but he was long gone. The police came and we told them what happened.”

Can you imagine any of the modern-day authorized journalists doing this?

Mr. Brown was a Life Member of the NRA and was a longtime vice-president of New York’s Shooters Committee on Political Education. He also was a member of the Second Amendment Foundation, Gun Owners of America, Citizens Committee for the Right to Keep and Bear Arms, and the Holland Rod and Gun Club. He was a certified NRA firearms instructor as well as a three-time NY State pistol champion in various categories.

Rest in peace, Mr. Brown. The likes of you will almost never be seen anymore and more’s the pity.