The Polite Society Podcast has not been available for download since approximately April. Paul Lathrop, the executive producer, had a stroke around that time and the worry was more for his health than getting it online. It was still broadcast over YouTube, on Facebook, and on OpsLens as it was recorded.

Well, good news! Not only has Paul recovered significantly from his stroke but the podcast will again be available for download.

Starting last night shortly after we recorded Episode 607, the RSS feed was uploaded to iTunes. You will still have to re-subscribe but it is now available. Look in the iTunes library for “Second Amendment Foundation’s Polite Society Podcast” to download it.

By the end of the week the RSS feed will be available on Stitcher and Google podcasts under the name above.

I was a guest on Armed Society Podcast with Paul Lathrop, Rob Morse, Amanda Suffecool, and Dianna Mueller. It was recorded on the evening of January 6th and you can guess the topic of our discussion. If you said anything other than protesters invading the Capitol, you’d be wrong.

Charlie Cook was chosen as the 2019 Ray Carter Blogger of the Year by the Second Amendment Foundation. Charlie produces Riding Shotgun with Charlie and Charlie’s Gun Grams. Both of these can be found on YouTube.

The award is named in honor of the late Ray Carter. Ray, or Gay Cynic to use his nom de plume, worked for the Second Amendment Foundation as Director of Development. He loved blogging and blogged at Free Thinker. Ray died in 2016 after a long battle with cancer. The Minuteman had this tribute on his life.

Charlie may not be a blogger in the truest sense of the word but he was very deserving of this award. Despite having met Ray only once in person, I think he would approve. Charlie reaches millions with his Gun Grams and his Riding Shotgun with Charlie YouTube videos. Getting the pro-gun message out using New Media is what it is all about.

Many of you remember the legal travails that Paul Lathrop of the Polite Society Podcast went through last year. To refresh your memories, a hothead at a truck stop falsely accused Paul of waving a gun in his face and threatening to shoot him. This led to his arrest for “terroristic threats” and “possession of a weapon during the commission of a felony”. The good news is all charges were dropped as surveillance video confirmed Paul’s account of the incident. The bad news is that he still has some debts left over from the incident.

To help retire these debts, I have had Polite Society Podcast patches made. These patches are 100% silk thread embroidered with a Velcro backing. It measures 2.5″ square. As you can see below, the patch company did a great job with our logo. 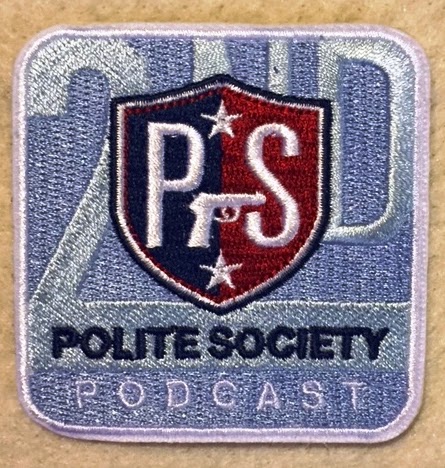 The price for these patches is $10 for one or $18 for two including postage. I have set up a special PayPal account to handle the sales of these patches. Payments can be sent via PayPal to john@politicsandguns.com. I’m not going to ask you to send the money as a “gift” but I won’t stop you if you do as PayPal charges a transaction fee for payment for “goods”.

If you don’t wish to use PayPal, just pop me an email there and I’ll send you an address to mail a check.

I will have some of these patches with me at the NRA Annual Meeting if you happen to run into me there.

I got the most wonderful news yesterday. Paul Lathrop, host and producer of The Polite Society Podcast, called to tell me that the Sarpy County (Nebraska) prosecutors were dropping all charges against him.

Paul and his wife Susan have their lives back again!

Paul had been charged with making “terroristic threats” and with possession of a firearm during the commission of a felony. These charges stemmed from an accusation by another driver at a truck stop in Sarpy County. That truck driver took exception to how close Paul’s student came to his truck at the diesel pumps. He then tried to enter the cab to assault Paul and the student and was told to back off by both the student and Paul. Later, this hothead called the sheriff’s department and accused Paul of threatening to shoot him which led to Paul being stopped on the highway and arrested.

You can read more about the incident here.

Paul will now be free to tell about his whole ordeal. The next episode of the Polite Society Podcast will feature it.

I’m just glad to get my friend back from under that dark cloud that had been hanging over him.

I posted earlier in the week regarding the need to raise funds for Paul Lathrop for his bail and legal defense. As I updated, he is now out of jail and home. However, as he told me after his meeting with his attorney yesterday in Omaha, he faces a year of uncertainty while the legal process goes on. His attorney is handling the case for a flat fee but it not a unsubstantial sum of money. This is especially true for good people of modest means like Paul and his wife Susan.

What makes this so frustrating is that Paul and Susan are having their life turned upside down over an untrue and unsubstantiated accusation by a disgruntled hot-head who was the aggressor in this whole matter. Aggravating it even more is that Sarpy County, Nebraska has a poor reputation on gun rights from what I’ve been told.

Paul is forbidden by his attorney from going public with the nitty-gritty of what happened but I know Paul. I first met him at the Gun Rights Policy Conference in Orlando in 2012 and then joined The Polite Society Podcast team over a year ago.

Replacing the PayPal link is a GoGetFunding page. This was the mechanism suggested by gun rights attorney Evan Nappen. The link is below:

http://gogetfunding.com/fellow-advocate-needs-your-help/
You can read more about this case and the appeal on our Polite Society Podcast page.
Please be as generous as you can be. The minimum is $1. Every little bit helps. Please don’t feel they don’t appreciate a small donation. They do. The broader the level of support, the better.

UPDATE: As of this morning, 126 people have donated $4,811. This puts the effort at 32% to the total needed. This is a good start and I appreciate everyone who has contributed.

As many of you know, I am a regular co-host of The Polite Society Podcast. Paul Lathrop is the host, producer, and creator of that podcast and he needs our help.

His regular job is that of a long-haul truck driver and he often has student drivers assigned to him. On Friday, he was training a student and they had stopped in Nebraska for refueling. This is where the incident began. The summation below by Frank Fiamingo, a fellow friend and the former president of New Jersey 2A Society, explains it well. Suffice to say, he is facing serious charges due to what I consider a false report.

Paul is a graduate of Massad Ayoob’s MAG-40 class and is sponsoring one in Sioux Falls, SD later this spring. I add this to emphasize the fact that Paul has been trained by the master in what you should and should not do when carrying concealed. Moreover, in our weekly podcasts we review defensive gun uses and what the person did right and wrong. Paul’s comments are well-reasoned and reflect how one should act in a confrontation.

Human Rights Advocate Paul Lathrop needs your help.
(Frank Jack Fiamingo)
Paul is a longtime advocate of the people’s right to self-defense. He is the author of the popular Podcast “Polite Society”. Paul is about as “salt of the earth” as you can get. A truck driver and driving instructor by trade, he and his loving wife Susan are two of the finest people on the planet.
Paul was in Nebraska with a truck driver student perfoming training. The student stopped at a station to refuel. As the student pulled away from the pump, another driver apparently felt that the student was too close to his rig. Although there was no collision, the irate driver of the other truck rushed over to the driver’s side and agressively approached the student to the point that the student felt that he was about to be assaulted.
The student told the other driver to back off. Paul also demanded that the driver back off. After some back and forth, the other driver finally went back to his vehicle and the student drove off. Unfortunately the other driver decided to call the police and accused Paul of threatening him with a gun. The student swears that he never saw a gun at any time during the confrontation, but the police stopped them and Paul was arrested.
Paul is being accused of making “terroristic” threats. Many of you are aware that that is one of the latest ploys used by ambitious prosecutors all over the nation. In addition, they included “Possession of a weapon during the commission of a felony”. Of course the “felony” is the trumped up charge of making terroristic threats. I find that to be a self-referencing, catch 22 type of charge.
In any event, many of you know Paul and those of you who don’t but who know me (Frank) can feel confident that he deserves our help and support. Paul is going to need money for bail and for a defense attorney. I am asking you to please consider helping this very deserving, hard-working advocate of our rights. Paul’s resources are modest and he really needs the help of the 2A and human rights community. Thank you.
(Susan) I am on my way to Nebraska this morning to meet with a lawyer and to hopefully get Paul out of jail. I will keep everyone updated as more information becomes available.
We are working on setting up a Go-Fund me page for Paul’s legal defense and for bail. If you would like to donate before the page is operational, you can send donations through PayPal to disasterjunkiesue@gmail.com
Thanks!

Paul and his wife Susan are not wealthy people. They are salt of the earth, good-hearted people struggling like everyone else in this economy. I can only imagine the financial burden that these false accusations have put on them. I have sent money their way and I hope you will see to it in your heart to do so as well.

While we are working on setting up a donation page or GoFundMe page for Paul’s defense, please consider sending any amount you can spare to Susan by way of PayPal. Send it as a “friend and family” donation which will mean all the money goes to Susan and Paul. The email address is disasterjunkiesue@gmail.com.

UPDATE: Paul was released from jail yesterday morning and arrived home in South Dakota yesterday evening. I spoke with him last night. He is overwhelmed by the level of support he has received from the 2A community. He was rather choked up when we spoke.

He is under orders from his attorney to say nothing about the incident. He will be having a court hearing next month and is hopeful.