The Polite Society Podcast has not been available for download since approximately April. Paul Lathrop, the executive producer, had a stroke around that time and the worry was more for his health than getting it online. It was still broadcast over YouTube, on Facebook, and on OpsLens as it was recorded.

Well, good news! Not only has Paul recovered significantly from his stroke but the podcast will again be available for download.

Starting last night shortly after we recorded Episode 607, the RSS feed was uploaded to iTunes. You will still have to re-subscribe but it is now available. Look in the iTunes library for “Second Amendment Foundation’s Polite Society Podcast” to download it.

By the end of the week the RSS feed will be available on Stitcher and Google podcasts under the name above.

Today marks the 10th anniversary of the ambush and murder of ICE-HSI Special Agent Jaime Zapata in Mexico. He was killed by narcoterrorists with the drug cartel Los Zetas and his partner Victor Avila was seriously wounded. Some of the weapons used by the narcoterrorists were walked to Mexico as part of the Obama-Biden Administration’s Operation Fast and Furious.

Victor Avila was our guest tonight on the Polite Society Podcast. He spoke about the ambush and the aftermath.

His interview starts at the 10 minute mark and runs to about the 40 minute mark. We had some audio difficulty towards the end due to winter storm-related power issues in the Dallas-Fort Worth area of Texas.

Last year, the US Office of Special Counsel issued a report that stated Agents Zapata and Avila received insufficient support for their mission in Mexico.

The investigation, conducted by the ICE Office of Professional Responsibility, substantiated that ICE officials failed to provide the agents additional support for their mission from either U.S. personnel or Mexican law enforcement. The agency also failed to properly brief and prepare the agents in advance of the assignment to discuss the cargo, security measures, and any other relevant information. The report confirmed that there was “a known lack of diligence with regard to the maintenance of the ICE armored vehicles.”  For example, it was known prior to the incident that the agents’ armored vehicle did not have properly functioning tracking equipment.

The investigation revealed that, at the time of the attack, management lacked specific policies and procedures for the execution of the agency mission in Mexico. For example, the agency lacked formalized policies with respect to travel; did not provide counter threat training to those stationed in Mexico; and did not provide armored vehicle training to employees in Mexico. Additionally, the Mexico City office suffered from weak operational security, which was evident in the lack of planning and execution for the trip taken by Agent Avila and Agent Zapata.

One thing that stood out in our interview with Victor was that some of the records from the Department of Justice regarding Operation Fast and Furious are still locked up. They were initially kept sealed under the Obama Administration’s claim of executive privilege. Despite President Trump’s pledge to the Terry family to release them, they still have never been released and I’m sure President Biden will make sure they never see the light of day.

Victor has written a book on his efforts to get the truth released among other things. It is called Agent Under Fire: A Murder and a Manfesto. I just ordered my copy tonight.

The page is here.

A complete compilation of the day’s events will be re-broadcast by Matt of Geeks, Gadgets, and Guns. I will post the link to that when it is available.

As a reminder, you can find the full agenda here.

The US State Department’s Directorate of Defense Trade Controls recently issued so-called guidance on what activities would come under the umbrella of the International Trade in Arms Regulations (ITAR). We just interviewed gunsmith Joseph LaJoy of LaJoy Precision on Friday night for the Polite Society Podcast on this very issue. Activities listed as manufacturing and thus subject to ITAR include traditional gunsmithing activities such as threading a barrel or reaming a new chamber. Gunsmiths will now have to pay an annual fee of $2,250 if they do something as simple as that or face massive fines and/or imprisonment. We concluded the rationale behind this “guidance” was to attack the gun culture and to drive gunsmiths out of business.

Joseph LaJoy said in the interview that he wished groups like the National Shooting Sports Foundation would get involved in the issue. From Joseph’s mouth to the NSSF’s ear, the release below was sent out on Saturday.

We recorded our regular Sunday episode of The Polite Society Podcast yesterday. It was our SHOT Show Pre-Show.

Usually these podcasts are done with the host and co-hosts participating from all over the country: Paul in South Dakota (or the road), Rob in California, Gary D in Illinois, Rachel in Texas, and me in North Carolina. This was the first time I got to do it face to face with Paul and Susan. It was kinda cool. I just hope the mikes didn’t pick up my coughs, throat clearings, and snorts.

We will be doing micro-casts every night of SHOT. So plan to listen.

You can hear Episode 302 here or download it from the usual suspects (iTunes, etc.)

I noted a few days ago that the Polite Society Podcast in conjunction with Ammoland.com and the New Jersey Second Amendment Society will be live streaming the 2015 Gun Rights Policy Conference. In order to do so, Paul Lathrop will need to purchase some new audio and video equipment.

Paul has started a GoFundMe campaign to raise the necessary funds. The goal is a conservative $731 for the video camera, tripod, and additional audio equipment.

The live streaming project is being done with the explicit permission of the Second Amendment Society and will be using the official audio feed managed by Charles Heller.

Unlike the Demanding Mommies, we in the gun rights movement don’t have a Sugar Daddy like Mike Bloomberg so we need your help. If you can help out with a donation of any size, please go to the GoFundMe page Paul has set up.

The live stream project will allow everyone to be able to follow the conference as it happens even if they can’t afford to fly to Phoenix or there is another case of a suicidal pyromaniac taking down a FAA control center. I’ve made a donation and hope you will do so too.

The location for the 2015 Gun Rights Policy Conference has been announced and it is Phoenix, Arizona. The conference will be held the last weekend of September as usual.

Let’s assume you just can’t make it to the conference due to cost or work or, God forbid, another suicidal maniac screwing up the FAA’s air traffic control system. Thanks to the joint efforts of Ammoland.com, the New Jersey Second Amendment Society, and The Polite Society Podcast (of which I’m a co-host)  you can watch the entire conference live via streaming video.

I am proud to announce that at the Gun Rights Policy Conference 2015 The Polite Society Podcast will partner with AmmoLand.com – Shooting Sports News & Business and NJ2AS News and Events to provide LIVE video streaming of the conference!

I want to thank Fredy Riehl of Ammoland, Frank Jack Fiamingo, president of NJ2AS, and Rob Morse each of whom helped hatch the plan. It is going to take quite a bit of planning to get it done the way that it should be done, but I am certain that it will be a fun time.

I think this is great news.

And in one of those weird coincidences, I’m leaving for a business conference in a few minutes in….Phoenix.

Episode 225 of the Polite Society Podcast has been posted. You can find it here.

In this episode, we interviewed John Willett and Rich Petkevis of the Citizens for a Safer New Jersey. Their goal is to advance gun rights in the Garden State by educating people about firearms and self-defense especially in those communities where firearms are rare. They are in the process of applying for their 503(c)3 non-profit status from the IRS.

As I’ve mentioned before, I am now a co-host on the Polite Society Podcast along with Rob Morse, Rachel Malone, and Paul Lathrop. I will be posting links to the most recent podcast on a regular basis (if I can remember to do it!).

Episode 223 has just been posted and features an interview with Trevor, Pat, and Mo of Action Shooting Radio. This is a relatively new podcast coming out of Canada and features news on competition shooting in the Great White North. You may remember Trevor from Canadian Reload Radio. He is also a co-host of the Slam Fire Podcast.

As always, we feature gun-related news and stories about the use of firearms in a defensive situation (DGUs).

You can hear Episode 223 here. Links to news and DGUs can also be found there. 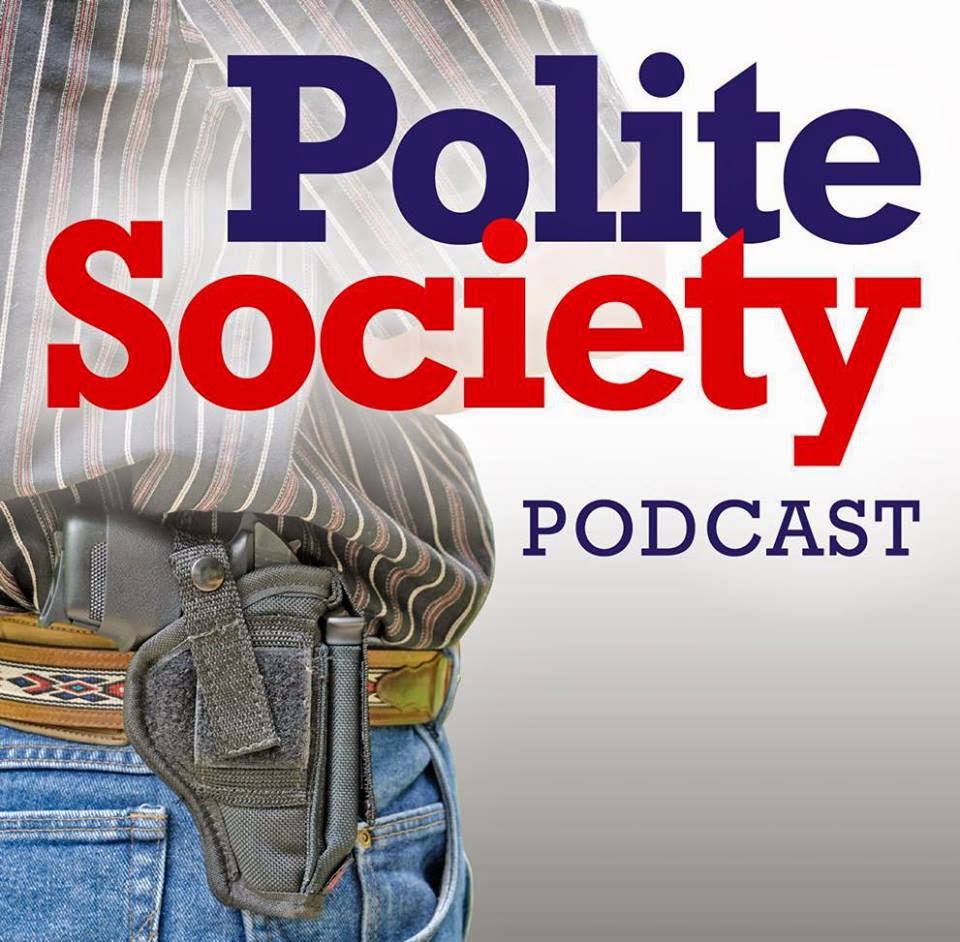