Doug Ritter, founder and chairman of Knife Rights, calls their fight “the second front in the defense of the Second Amendment.” Todd Rathner, Director of Legislative Affairs for Knife Rights, is also a member of the Board of Directors of the NRA and has fought for the liberalization of laws against suppressors and those against switchblades and other knives. I would wager that over 99% of gun owners support their efforts to change laws against switchblades, dirks, daggers, and other knives.

It is against this background that I was incredibly saddened to see a sign in the window of Microtech Knives posting the premises against concealed carry of firearms. You can see the sign circled to the left of the front door in the picture below. 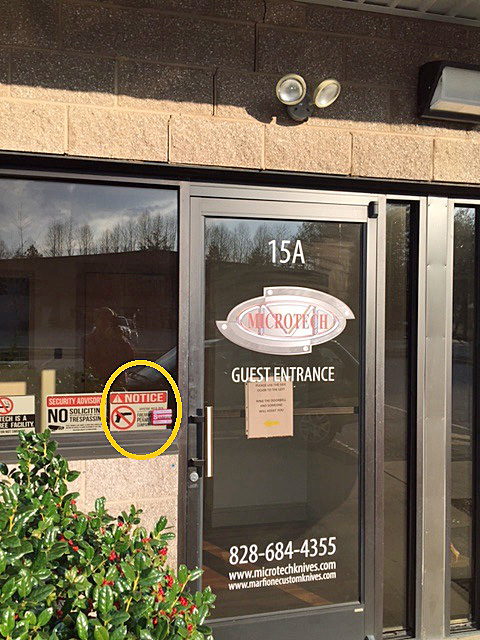 The Complementary Spouse and I were driving to dinner when we came across the industrial park where Microtech South is located. We took a short detour through the park because I had always wondered about their location. That was when I saw the sign.

Microtech has a well deserved reputation for producing high end knives and especially automatic knives aka switchblades. Their knives sell in the hundreds of dollars. They even had a firearms division called MSAR at one time. Their founder, Anthony Marfione, has even been on the Board of Regents of the American Knife and Tool Institute which fights for knife owner’s rights.

I should point out that I explicitly recognize the right of the owners of private property to either post or not post their premises at their own discretion.

However, is it too much to expect a knife company to recognize gun rights in the same manner we in the gun culture recognize knife rights? I thought we were all in this fight together.

UPDATE: One of the comments below is from Dan Lawson who is general counsel to Microtech. In the interest of fairness, I am reprinting it here so that his comments will not be overlooked.

Microtech is very supportive of the individual right to keep and bear arms. To us, this means that individuals have the right to possess and carry weapons in case of a confrontation.

We view this as a fundamental and inalienable right with which all are created. We also recognize that “arms” within the scope and meaning of the right encompasses anything an individual wears for his or her “ defence, or takes into his hands, or useth in wrath to cast at or strike another” ; within the words of Heller.

Essentially everyone at Microtech is armed all the time. Everybody has a knife. We make the best edged arms in the class. We also have a “Proprietary Armed Security Force” on premises. Our employees and friends know us as avid owners and users of firearms.

The Microtech facility is not a place open to the public. We do, as a part of our security program, reserve the right to ask that visitors with whom we have no experience or familiarity not bring firearms into the secured spaces. We do not “post against carry” and certainly do not discourage people from exercising their rights.

I’m happy to see a response from Microtech and glad to see their reaffirmation of a commitment to the Second Amendment. I do take issue with Mr. Lawson’s assertion that they don’t post against carry. The sign by the door indicates, in my opinion, that they do post against carry and it would carry the force of law in the state of North Carolina.


§ 14-415.11(c)(8) of the NC General Statutes states you cannot carry even with a permit on “On any private premises where notice that carrying a concealed handgun is prohibited by the posting of a conspicuous notice or statement by the person in legal possession or control of the premises.”


UPDATE II: Microtech Knives posted on their Facebook page that they’ve taken down the no CCW post sign. I can confirm this is correct as I drove by their facility within the last hour and checked.


One of the comments earlier asked if all the others in their industrial park were posted against carry. The answer is no. While I didn’t go door to door to look for little, tiny posted post against carry decals, I didn’t see any other facility in the area including their next door neighbor, a pottery store, that were posted as I drove slowly by each building.


I would like to point people to Oleg Volk’s share of my original post as it has a lot of interesting comments including ones from Dan Lawson and Anthony Marfione. Jonathan Sullivan aka Linoge also has generated some good comments in response to his share of my post.


I was amused by a post by Todd Underwood of United Gun Group who characterized my post as “a poorly written article”. That is his opinion with which I, unsurprisingly, disagree. He bases much of his response on a comment by Microtech’s general counsel Dan Lawson. You can see my response to that above.


Private property is private property and the owners or those in control of the premises are free to do what they will including posting it against carry. Signs, however, do not and will not stop a person or persons intent on causing those in the building harm. Concealed carry permit holders are the good guys and have had their bonafides attested to by a criminal background check. A more reasonable sign and one I’ve seen on the doors of a number of gun shops might say, “We respect the right to carry concealed. We ask that you keep your firearm holstered while on our premises.” If I had seen such a sign, I would have publicized it just as quickly as the sign that has caused this controversy.

In response to anticipated efforts by the gun prohibitionists, Grass Roots North Carolina is launching the Safe Restaurants Project. As the release below makes clear, it is an effort to encourage restaurant owners to NOT post their restaurants against concealed carry.

From the GRNC release:

Accordingly, and with great reluctance, GRNC is responding with its “GRNC Safe Restaurants Project,” to ensure the new law will provide its intended deterrent to violent crime.

The 3 objectives of the “GRNC Safe Restaurants Project”:

GRNC will distribute Restaurant Don’t Buy lists and relevant materials to tens of thousands of gun owners via:

“It’s unfortunate GRNC must counter gun control activists’ attempts to undermine a law intended to deter restaurant crime and save lives. We fully sympathize with restaurant owners caught in the middle of a battle we’d rather not fight, but they should understand that, according to the Pew Research Center, gun rights supporters donate four times more and are more politically involved than gun control advocates. They should ask themselves whether they want to alienate the 399,268 North Carolinians who have applied for concealed handgun permits.”

This brings to mind a suggestion made many times by Tom Gresham when coming across a store or restaurant that is posted against concealed carry. Tom calls the establishment and says to the manager, “I wanted to shop (or eat) at your store (restaurant) but it was unsafe.”  When they ask what you mean, you tell them they have posted against concealed carry and you won’t subject your family to the risk. Then you tell them what you spent at their competitors. To really get the point across, you fax them a copy of your receipt from their competitor. Done often enough, it will get the message across.