Greg Seabolt is the Sheriff of Randolph County, North Carolina. His recent statements regarding Second Amendment Sanctuaries make me proud to say I was born in Randolph County though I haven’t lived there for over 53 years.

The Asheboro Courier-Tribune reports that Sheriff Seabolt will be bringing a Second Amendment resolution to the County Commissioners at their meeting on February 3rd.

Seabolt announced his intentions on his Facebook page saying:

My job as the Sheriff of Randolph County is to protect and serve the nearly 145,000 citizens. The laws of this great state are very important and must be enforced to insure the safety of our citizens. The rights of each individual in this country are also very important and must never be modified, misinterpreted or overlooked. These are the rights of our constitution that applies to all citizens of this great nation. We have many people attempting to intrude on those rights and that will not be tolerated. That is the reason I stand firm alongside other Sheriffs across this state to draft a proclamation which will be presented to the county commissioners. This resolution will indicate our intentions of preserving our 2nd amendment right so that all citizens can defend themselves against enemies foreign and domestic and never question their authority to bear arms.

My staff and I have been working diligently to prepare this resolution and our hope is deliver it to the commissioners next month. While the subject of the 2nd Amendment can often divide, we must stand firm and hold true that once our rights are infringed upon, we lose the ability to govern ourselves as our founding fathers imagined.

North Carolina needs more sheriffs like Sheriff Seabolt and fewer like some of the sheriffs in the larger counties.

This past Monday a shooting range in Trinity, North Carolina was hit with arson. The Triad Active Shooters Klub – TASK – had their shooting benches and  three out of five shooting line shelters destroyed by fire. Randolph County Fire Marshal Erik Beard says the fire was intentionally set. 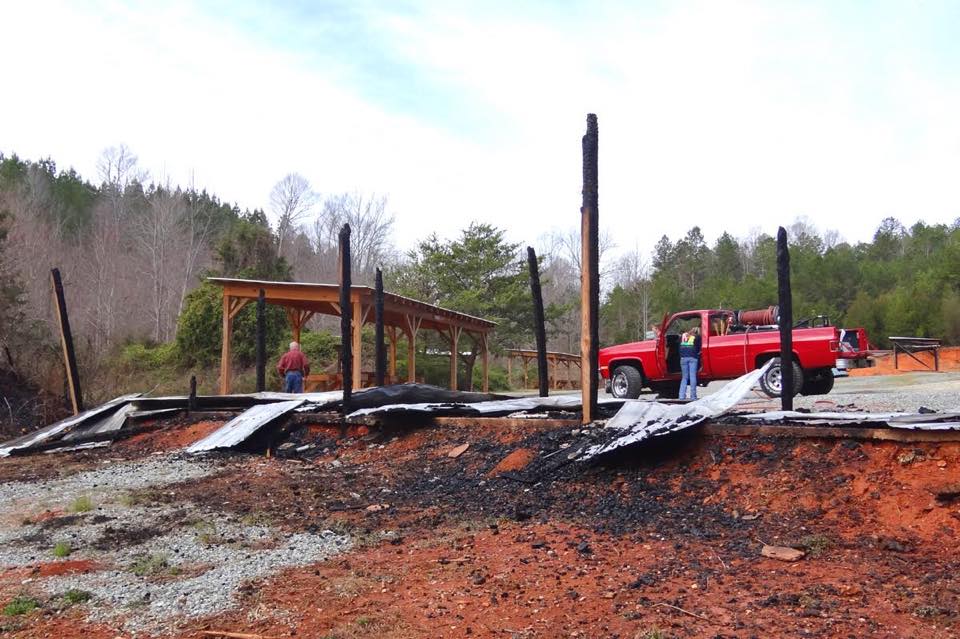 You can see more pictures of the destruction here. There is a $5,000 reward being offered for information leading to the arrest and conviction of those responsible. Please contact the Randolph County Sheriff’s Department at (336) 318-6699 if you have any information.

Monty Mendenhall of the club had this to say about the fire:

There was arson at the TASK early Monday morning range. Three of the five covered firing points were completely destroyed. The remaining two had five one-gallon plastic containers of gasoline placed strategically next to the wooden posts that support the roof and under the piled up shooting benches. Two covered firing lines were not burned because the fuses to the gas failed.

We believe that more than one arsonist was involved, maybe several. This belief is because, at a minimum, twenty five individual containers of gasoline were used. We found five at each of the unburned structures and assume that there were at least that many at each of the other three. It would take quite a while for one person to remove 25 one-gallon containers from a vehicle and set them out out beside the posts and under the shooting benches. Moreover, our shooting benches are too heavy for one man to lift. Two men can move one but it would require three or four to stack one upon another.

The TASK members have been great about this Daniel. The BODs and volunteers have already cleaned up the debris and stacked all of the burned tin roof panels. The metal will be taken to a salvage yard and the wood will be placed in a safe place and burned. The ground was swept with a magnetic broom and approximately two gallons of nails and screws were recovered for disposal.

All five firing lines are open now but the burned ones lack everything except the concrete floor.

The contractor who built all of the structures has surveyed the scene and he is working with us. In addition to the cost of reconstructing the covered firing lines, we are looking at an unknown cost for a video/motion-detecting security system.

Six years were required to build the structures and to clear the new 100 yard range. We did it one step at a time as our dues came in. The club lacks enough funds to pay for all of the reconstruction at this moment but construction will begin anyway on a pay-as-you-go basis. We will not allow a group of anti-Second Amendment NAZIs stop us from peaceably assembling to enjoy ours Second Amendment rights.

Any financial help that can be provided will be appreciated. Even if none is though, TASK will rebuild. It will just take a little longer.

If and when a GoFundMe or similar page is set up, I’ll post an update.

UPDATE: A GoFundMe page has been set up. They are seeking to raise $3000. Just to be clear, the donation will not be tax deductible as TASK is a 501(c)(7) organization.

UPDATE II: If would prefer to send a check rather than go through GoFundMe, the address is:

The voters in Randolph County, Illinois will see a ballot measure dealing with concealed carry in November. It is an advisory vote that will carry no legal weight but it certainly will carry a lot of symbolic weight.

The very last item on the ballot is an advisory question that asks: “Shall any individual who is not prohibited from possessing firearms under the law be allowed to conceal, possess, carry and or transport firearms in any manner free from infringement?


Randolph County resident Arlyn Fisk he says if it were legal, he might not carry a firearm on his hip all the time, but he’d like to have the right to do so.


“I believe it to be a second amendment right to any citizen of the United States, provided they’re upstanding and law abiding,” said Fisk. “But we’re in the only state in the union that doesn’t allow concealed carry.”


That’s why Fisk and others passed petitions around town to get this on the ballot and put the issue to Randolph County voters.


“We can’t pass any laws on the county that supersedes the state,” said Luehr. “So even if this passes on the county ballot, it doesn’t really mean anything.”

As Mr. Fisk notes that even if the vote is advisory, it will put politicians on notice especially if it gets the expected high level of support.

Randolph County is located south-east of St. Louis and is the only Illinois county that has parts of its territory on the western side of the Mississippi River. It is also home to the World Shooting and Recreational Complex in Sparta.