The Royal Canadian Mounted Police recently made a decision to reclassify the Swiss Arms PE90 as a prohibited firearm. The Swiss Arms PE90 is the Canadian version of SigSauer’s SIG551. The RCMP are in charge of how firearms in Canada are classified. As I understand it, a firearm can be classified as unrestricted, restricted, or prohibited by the RCMP’s Canadian Firearms Program.

The problem here is that the RCMP had originally classified the Swiss Arms Green Classic PE90 as either unrestricted or restricted depending on barrel length 10 years ago. Since then, Canadians have purchased upwards of 2,000 of these rifles at a cost between $3-4000 each. Now the RCMP is telling the gun owners that they must surrender these rifles to them without any sort of compensation.

The CBC has a rather good story on the whole controversy which is shown below:

Today is Canada Day. It marks the uniting of the British colonies of Nova Scotia and New Brunswick with the Province of Canada (which included both Ontario and Quebec) into the Dominion of Canada on July 1, 1867 by way of the British North America Act of 1867. It is Canada’s national holiday.

So on this Canadian holiday I thought it appropriate to look again at the seizure of resident’s firearms in the Province of Alberta.

The RCMP announced on Sunday that they would start returning some of the firearms seized from residents of the town of High River.

An RCMP news release says that owners of guns that were seized should call police, and that an officer will call them back to make arrangements to have the weapons picked up.

The Mounties said earlier that they took the guns as officers searched homes in High River’s flood zone to look for flood victims, pets and anything that might pose a threat to returning residents.

Any guns were removed from homes because they were not properly stored, said Staff Sgt. Brian Jones, who added that no charges are planned.

The Prime Minister’s Office has now gotten involved in this affair. Prime Minister Stephen Harper is a resident of Alberta. His Canadian Parliament riding of Calgary Southwest adjoins the riding in which High River is located.

The move to take the weapons was condemned by the Prime Minister’s Office, who said the Mounties should focus on more important tasks such as protecting lives and private property.

Harper’s criticism of the RCMP’s move brought criticism itself.

Darryl Davies, a Carleton University criminology professor, considered the condemnation from the Prime Minister’s Office to be highly inappropriate.

“It’s completely and utterly inappropriate for the PMO to issue operational instructions to the RCMP,” Davies said Sunday.

Have we arrived at a point in Canada where the PMO can interfere in criminal investigations as well?”

Davies said he thought it must be embarrassing for the RCMP to be admonished by the PMO in the media, and that it undermines the force’s credibility and impartiality.

Davies, who has long criticized the RCMP himself, is also a strong proponent of gun control. He is on record as favoring the banning of all semi-automatic firearms. Davies also served as the Senior Communications Officer on Firearms, Communications Branch Department of Justice. Thus, I think Davies’ criticism in context is more about his anti-gun beliefs than anything to do with political interference with the RCMP.

So while we often think of our neighbors to the North as just like us but more polite, legally they have a much different system in which things like property rights and the right to keep and bear arms are treated much differently. That said, Prime Minister Stephen Harper and his Conservative government probably respect both of rights more so than the current Obama administration.

The quote of the day comes from a resident of High River, Alberta. That Canadian town of about 13,000 about 25 miles south of Calgary has been evacuated from the greater part of a week due to the flooding of the Highwood River. Residents there are not only angry that they are not being allowed to return to their homes but that the RCMP or Royal Canadian Mounted Police had gone house to house and confiscated their firearms.


One resident with memories of police confiscation of firearms in New Orleans had this to say:

“This is the reason the U.S. has the right to bear arms,” said Charles Timpano, pointing to the group of Mounties.

Video of the confrontation between residents of High River and the RCMP is below.

As a followup, the Solicitor General of the Province of Alberta announced today that he is working with the Mounties to assure a speedy and timely return of the seized firearms to their owners.

Sgt. Preston of the Yukon wouldn’t know what to do with this! The Royal Canadian Mounted Police are going high-tech to investigate crime and accident scenes. They are testing unmanned drone helicopters called the Draganflyer X6. 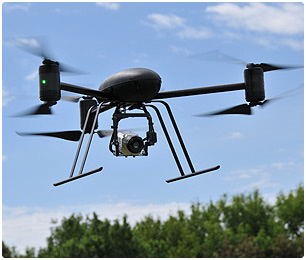 The Draganflyer is made by Draganfly Innovations of Saskatoon, Saskatchewan. It can mount any number of different cameras or camcorders. The X6 weighs only 35 ounces and can carry a payload of 18 ounces.

The RCMP say that they only plan to use the drone for crime and accident scene investigations and not for surveillance. However, the manufacturer does promote it for military apps for intelligence gathering.