Mr Colion Noir takes on Rep. Diana DeGette’s stupid comments about magazines being ammunition and one-time use products. I think the best line is when he says we aren’t talking about latex condoms.

As someone noted in the comments, the scary part is that “these type of idiots are our Law Makers.” I would agree.

I don’t know who writes the Rocky Mountain Right blog but they have a wicked good sense of humor. Their latest post is ostensibly written by Rep. Diana DeGette (D-CO) and contains her guide to gun safety.

It contains this warning about those dastardly “assault weapons” and how to recognize them.

The post even has drawings to illustrate the dangers of certain kinds of ammunition. I didn’t know ammo had dragons in it! 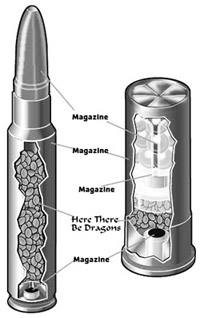 Go to the link above and read the whole thing.

Rep. Diana DeGette (D-CO) seems to be in a contest with Rep. Carolyn McCarthy (D-NY) to see who can make the most ignorant, most inane comment regarding firearms.

Rep. McCarthy is famous for response that a barrel shroud on a semi-automatic rifle or carbine is “a shoulder thing that goes up.” Yesterday at a public forum held by the Denver Post on gun control, Rep. DeGette launched into a disquisition on standard capacity magazine that illustrated merely one thing – she doesn’t have a clue about what she is talking about nor what legislation on which she is the lead co-sponsor would ban.

Asked how a ban on magazines holding more than 15 rounds would be effective in reducing gun violence, DeGette said:

“I will tell you these are ammunition, they’re bullets, so the people who have those now they’re going to shoot them, so if you ban them in the future, the number of these high capacity magazines is going to decrease dramatically over time because the bullets will have been shot and there won’t be any more available.”

It is a shame that Larimer County Sheriff Justin Justin Smith who was sitting next to her at the forum didn’t just take out a spare magazine, start unloading the cartridges, and then reload them. That would have said just about everything. As it was, the crowd just chuckled after her remarks.

David Codrea reports in the National Gun Rights Examiner that DeGette’s spokesperson doubled down on her boss’ ignorance.

A spokeswoman trying to deflect well-deserved ridicule and criticism made things worse in an issued statement, calling it “political gamesmanship” by “opponents of common-sense gun violence prevention trying to manipulate the facts to distract from the critical issue of keeping our children safe and keeping killing machines out of the hands of disturbed individuals.

“The Congresswoman has been working on a high-capacity assault magazine ban for years, and has been deeply involved in the issue,” Juliet Johnson said. “She simply misspoke in referring to ‘magazines’ when she should have referred to ‘clips,’ which cannot be reused because they don’t have a feeding mechanism.”

Of course, clips can be reloaded just like magazines.

Rep. Carolyn McCarthy (D-NY) and Rep. Diana DeGette (D-CO) will be introducing a bill today that will mandate reduced-capacity magazines and will ban sale and transfer of standard-capacity magazines. Checking the Library of Congress service Thomas, no bills are listed as having been introduced but I think there is probably some lag in the system.

This move by McCarthy and DeGette was fully expected. Sebastian feels that the magazine ban will be harder to fight than any AWB due to many on the center-right who feel it is reasonable. He makes a number of good points especially that the criminal class will have no trouble in obtaining magazines.

The reasoning is strikingly clear. The cops are the experts on the current criminal trends. If they have determined that a “high capacity” semiautomatic pistol and a .223 semiautomatic rifle with 30-round magazines are the best firearms for them to use to protect people like me and my family, they are obviously the best things for us to use to protect ourselves and our families .

In her statement below, McCarthy makes the semi-erroneous claim that standard capacity magazines are not allowed for hunting. Magazine restrictions as well as restrictions on semi-automatic rifles for hunting exist in some locations and not in others. We need to get away from arguing sporting purpose with regard to magazine-fed rifles and pistols. In my opinion, self-defense of self and family is paramount and Mas makes a very cogent case for why we need standard capacity magazines in his blog post.

McCarthy’s release on the bill:

“These assault magazines help put the ‘mass’ in ‘mass shooting’ and anything we can do to stop their proliferation will save lives in America,” Rep. McCarthy said. “These devices are used to kill as many people as possible in the shortest amount of time possible and we owe it to innocent Americans everywhere to keep them out of the hands of dangerous people. We don’t even allow hunters to use them – something’s deeply wrong if we’re protecting game more than we’re protecting innocent human beings.”
“Since I came to Congress, I have been working to protect our children and our families from senseless gun violence,” Rep. DeGette said. “Recent tragedies have only heightened the need, and that is why Rep. McCarthy and I are reintroducing our bill to ban high-capacity assault magazines. While there is no single answer to stopping these massacres, this bill is a step that will go a long way toward making our country safe.”

The High Capacity Ammunition Feeding Device Act, as the bill is formally known, bans the sale or transfer of ammunition magazines holding more than 10 rounds. Such a standard was federal law between 1994 and 2004, when the assault weapons ban was in effect, and it is state law in many parts of the United States. Magazines are available today in capacities of up to 100 and even more. Law enforcement officials and analysts have cited the direct role that magazine capacity plays in ensuring the high numbers of casualties in mass shootings. Often, as in the cases of Tucson, Arizona and the Long Island Railroad, the carnage ends when the shooters run out of bullets and stop to reload, at which point they are stopped by bystanders.

Unfortunately, the devices are still easily available to the public and have been used in every mass shooting in recent history, such as: Sandy Hook Elementary School in Connecticut; a shopping mall in Oregon; a temple in Wisconsin; a movie theater in Colorado; a Congressional event in Arizona; at schools like Columbine High School and Virginia Tech University; at a law office in California; and on a commuter rail car in New York. They were even acquired from the United States by mail order and used in the Norway shooting of 2011, where 69 people were shot to death.

In many cases, mass shooters intending to act don’t have access to a black market, but acquire whatever they can easily and legally, making a ban on high-capacity magazines a major obstacle for future mass murderers to carry out their plans.

Rep. McCarthy, a lifelong nurse, strode into a life of activism to reduce gun violence after her husband was murdered and son critically wounded in the 1993 mass shooting on the Long Island Railroad in New York. Her activism led her to Washington first to lobby members of Congress as an advocate for victims, and then as a member herself after running against her own congressman who voted against the assault weapons ban.

Rep. DeGette has been an outspoken supporter of measures to reduce gun violence and played a critical role in rounding up support for new cosponsors for the ban on high-capacity magazines after the most recent tragedy at Sandy Hook Elementary School in Newtown, Connecticut. Her district includes Columbine High School and is adjacent to that which includes Aurora, Colorado. She is now, with Rep. McCarthy, the original co-sponsor of the legislation, which will receive a bill number shortly.

The bill to ban high-capacity magazines was carried in the Senate in the 112th Congress by Frank Lautenberg of New Jersey. Sen. Lautenberg has helped lead the fight for safer gun policy for much of his decades-long career, writing the law to keep guns out of the hands of domestic violence offenders and co-sponsoring the original Brady Law to establish background checks for handgun purchases, among other efforts.