When you go to the dentist to get a crown, you expect to leave with a substantial bill and a numb lip or face. I left with a little something extra. 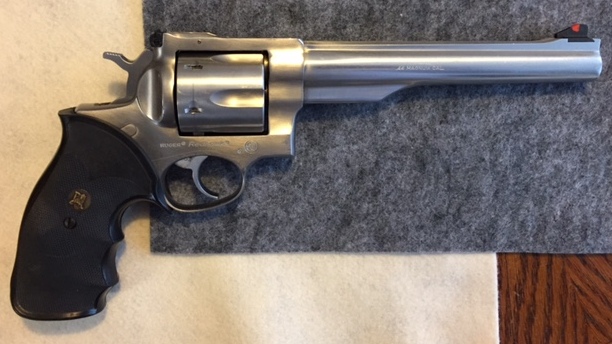 Little is relative especially when talking about a Ruger Redhawk in .44 Magnum with a 6 inch barrel.

And now for the rest of the story as Paul Harvey would have said.

My dentist, Dr. F, is a huge fan of revolvers and he knows I am as well. We always chat about them along with whatever else he or I have either bought or shot lately. After discussing the new Colt Cobra we got around to other revolvers. He noted he had a S&W Model 29 which just wasn’t that fun to shoot unlike his Ruger Redhawk. He then asked me if I’d like to try it out. Of course!

Now both the assistant and I thought he probably meant to try it out someday when I met him at the range. That thought was quickly dismissed when he left the room, came back, and then set the Ruger Redhawk above down on the counter! What he meant was that he was going to loan it to me to take home and try out at my own convenience.

The funny part of the whole episode was when my appointment was over he just assumed I would be comfortable carrying this massive piece of hardware out through his waiting room as is. His assistant “D” asked would I like a bag and I, of course, said yes. While she was getting a bag, Dr. F. dug around his office and found a case for it.

So Dr. F’s Ruger Redhawk is now sitting in my safe while I wait for a box each of .44 Mag and .44 Special ammo to arrive.

As I said in the headline, I have the world’s best dentist. Not only is he really good at his profession but he is a gun guy who wants to share the experience. I am one lucky patient.

Now this is interesting. Ruger is getting into the .45 ACP revolver game. They have just announced a new version of the Ruger Redhawk that will handle both the .45 ACP with moon clips and the .45 Colt.

The specs are below:

It’s a bit pricey but they are still making double action revolvers unlike the bankrupt Colt. I have a couple Ruger revolvers and they are solid, well-made handguns.

UPDATE: Ed Head has part one of his review of the Ruger Redhawk in .45 ACP/.45 Colt up. Ed is one of the people that Ruger sends firearms to so that they can be wrung out before launch.