When it comes to protecting the Constitution and the First Amendment right of free speech, I have come to understand that the longer a politician is in Washington, DC the less that they remember their oath of office.

Every US Representative takes the following oath:

I, (state your name), do solemnly swear (or affirm) that I will support and defend the Constitution of the United States against all enemies, foreign and domestic; that I will bear true faith and allegiance to the same; that I take this obligation freely, without any mental reservation or purpose of evasion, and that I will well and faithfully discharge the duties of the office on which I am about to enter. So help me God.

While the oath has changed since the first Congress, it has always included a line stating that the elected representative will support the Constitution.

I read yesterday that Rep. Ed Royce (R-CA), chairman of the House Foreign Affairs Committee, had sent a letter to President Trump urging action on “3-D printed guns.” The letter says in part:

As you know, the State Department recently reached an agreement with Defense Distributed that will allow the Texas-based company to publish blueprints for making 3D-printed guns on its website. This settlement requires the government to change export restrictions that have long been in place to prevent this sensitive technical data from getting into the hands of those overseas that would do us harm.


I am very concerned that the distribution of these blueprints could allow terrorists and international criminal organizations to manufacture guns that can’t be detected at current security checkpoints in airports, schools, and public buildings. These weapons will not be tagged by serial numbers, making them challenging to trace. This also could undermine U.S. laws that seek to stop the flow of weapons into war-torn countries, and other places where regimes use violence to retain power.


It is critical that our laws keep pace with technology. We can’t give terrorists or violent criminals an easier path to obtaining deadly weapons. I stand ready to help support your Administration in efforts to bolster our national security.

The hyperbole in this letter is astounding as is the stupidity. The thought that rebels and terrorists in  “war-torn countries” would want a 3-D printed “plastic gun” when they could have a functioning AK-47 or M-16 made in the Khyber Pass is ridiculous. A quick Google search on “M16 blueprints pdf” returns 377,000 hits.  As to detection, if the nudie scan machine at the airport’s TSA checkpoint can detect a slip of paper in my pocket, it would be able to detect a “plastic gun”.

It is at this point I should mention that Royce has decided not to run for re-election to his seat in Congress where he has served since 1993. He is also “A-rated” by the NRA.

Lame duck or not, NRA A-rated or not, Ed Royce took an oath to defend the Constitution against all enemies, foreign and domestic’ and swore that he would bear true faith and allegiance to it. Defending the Constitution includes defending free speech and attempts at prior restraint. Royce for all intents and purposes agrees with trampling on the Constitution when it serves his political interests.

In a just world, Royce would be forced to resign. Within the Beltway, he will be applauded for his “courage” and rewarded with a fat consultancy come January 2019.

The Republican Party is often derisively called the Stupid Party because of the dumb stuff it does. Things like firing my friend Rachel Malone or things like caving to demands from people who will never vote for them. The latter is the case in North Carolina with the Republicans in the North Carolina Senate.

North Carolinians Against Gun Violence (sic), NCGV, a wholly owned subsidiary of Michael Bloomberg’s Everytown Moms for Illegal Mayors, sent out an email early this morning touting their achievement in stopping HB 746 which would have allowed permitless concealed carry. This bill had passed the North Carolina House but stalled in the Senate.

As reported in previous updates, NCGV was on the lookout for the Senate to taking up HB746, the gun omnibus bill that included permitless carry. If this bill would have passed it would mean that people as young as 18 years old with no training and no background check could carry a hidden loaded weapon in public. Because of NCGV pressure and support, the Senate did not consider the bill. We are proud to report that your support made sure that this bill did not even receive a committee hearing on the Senate side.

As a secondary matter, NCGV spoke with legislators and allies about ensuring that our teachers would not be allowed to concealed carry in schools.

The aadjournment (sic) resolution was not sine die and legislators have scheduled a session in November, presumably to take up matters relating to the amendments. Although the bill is technically not dead, it is incredibly unlikely to be taken up during that fall session.

During the interim, legislators restated their commitment to expanding school safety, studying what more can be done, and working with community partners. NCGV will be in any relevant meetings as they take place during the interim.

So you have a group opposed to civil rights crowing that their pressure stopped Majority Leader Phil Berger (R-Rockingham) and the Republicans in the State Senate from even holding hearings on HB 746 which was an omnibus firearms bill which included permitless concealed carry. Please bear in mind that Republicans hold veto-proof super-majorities in both houses of the North Carolina General Assembly. Please also bear in mind that probably not one person in 100 that supports NCGV will even vote for a Republican for dog catcher. They consider themselves the NC equivalent of “The Resistance”.

Has the Republican Party of North Carolina never heard of the old adage that you reward your friends and punish your enemies?

As that great Southern philosopher Forrest Gump famously said, “Stupid is as stupid does.”

My friend and fellow co-host of the Polite Society Podcast Rachel Malone was fired last month as Operations Manager of the Texas Republican Party. It seems a certain elected official took offense to her criticism of his 40 point “school and firearm safety” proposals especially since it contained a red-flag law proposal. As a result of Gov. Abbott’s complaint as conveyed by his henchman, the Texas GOP Chairman was forced to fire Rachel.

If you want to control someone it is much better to keep them under your employ. Firing them allows that person to become a free agent and return to the grass roots firearms activism for which she is known. 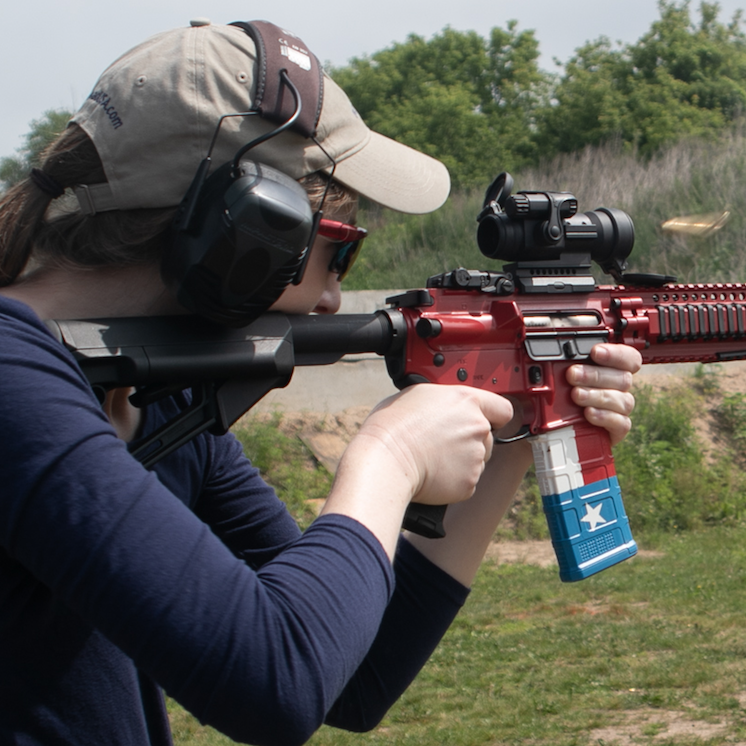 While I’ve known it since Monday, it is now public that Rachel will be the new Texas Director for Gun Owners of America. In that role, she will lobby the Texas legislature directly on gun rights. I know Rachel’s ultimate goal is to bring constitutional carry to Texas.

Springfield, VA – Gun Owners of America (GOA) announces today the hiring of Rachel Malone as Texas Director. This signifies a new focus on GOA’s advocacy within the Texas State Legislature.

Texas is a key state for GOA’s work to advance gun freedoms. Texas is known for its rich heritage of gun owners, and it deserves strong advocacy for gun rights. Knowing this, Gun Owners of America is delighted to establish a permanent presence within Texas to preserve and defend Texans’ right to keep and bear arms.

Erich Pratt, Executive Director for Gun Owners of America, stated: “Texas is facing a battle, and GOA intends to be on the forefront. As the no-compromise gun lobby, GOA looks forward to working with grassroots activists all across Texas for victories in their state.

“I’m thrilled that Rachel Malone is serving as Texas Director for GOA. She has a strong background of fighting for firearms freedom, connecting with grassroots, and advocating within the Texas Legislature. I am confident in her ability to represent Texas gun owners in protecting the essential freedom of the right to keep and bear arms.”

By the way, the picture above of Rachel was from the recent MAG-180 held in Wisconsin where Rachel passed everything with flying colors.

Congrats to Rachel on her new position and kudos to GOA for recognizing the gem that is Rachel in hiring her as the Texas Director.