UPDATE: WND has removed the T-shirt in question. From Sean at An NC Gun Blog.

UPDATE: After emailed conversation with WND Editor Joseph Farah, they have pulled the shirt from their e-store! He has given me his personal assurance that a full investigation will commence as soon as everyone gets back to the office on Monday!

Mr. Farah, I want to thank you for your quick response to this situation and I look forward to discussing this with you on Monday. It is clear from your swift handling of this that you are committed to honest dealings and I applaud you for it.

Due to the nature of the Internet, a post once published can never really go away. I have retained the post below for you to read, but be assured that Mr. Farah has handled this already and no further emails to him are necessary, unless you wish to email him with your thanks for his proper handling of it.

On the evening of July 6th, I posted on the breaking story from David Codrea and Mike Vanderboegh regarding the potential involvement of the ATF’s Tampa Field Division in gunwalking to MS-13 in Honduras. The very first person to make a comment on this post was Sean Sorrentino who said, “Am I the only person on the planet that didn’t get guns from the ATF?”. You can see a screen cap of his comment below. 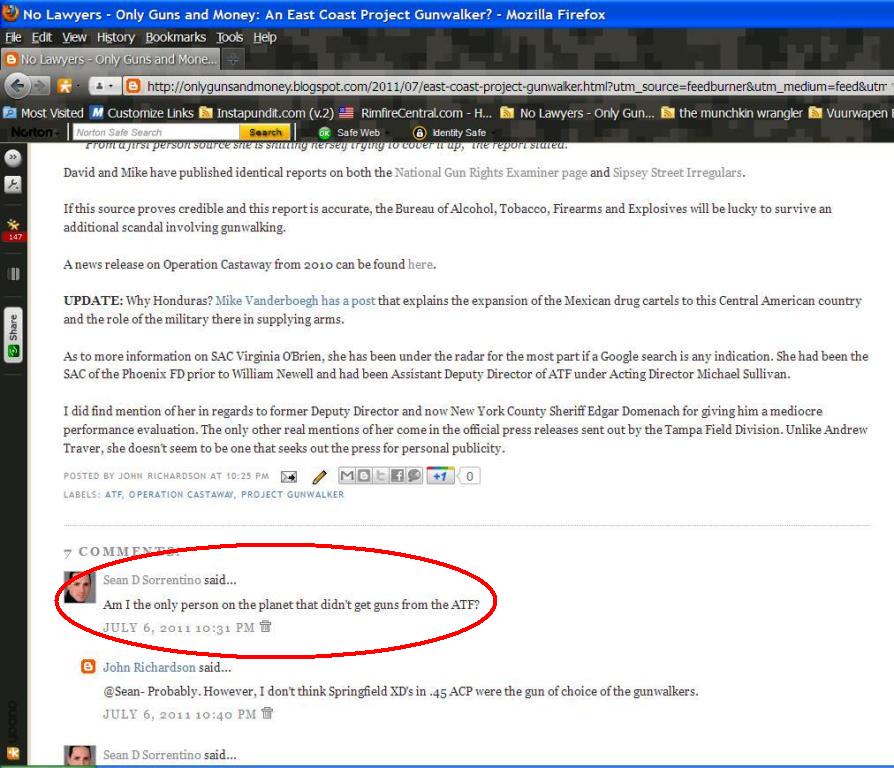 David Codrea read the comment and thought it would make a great T-shirt. He did a post on it on his War On Guns blog on Thursday. Sean ran with the idea and with the help of Robb Allen created a T-shirt featuring HIS comment. He put it up for sale on this Friday. I know because I’ve already bought one.

Sean reports in a blog post this morning that he found out his words and David’s idea were taken by World Net Daily to create a T-shirt.

I got an email from David Codrea, one of the two original “Online Reporters” of the Gunwalker scandal, and the person who suggested that my phrase “Am I the only person on the planet who didn’t get guns from the ATF?” should be put on a t-shirt. He sent me this link. As you can see, the same phrase appears on the WND shirt. I’ve gotten a screen capture as well.

Go to Sean’s website and read the whole story. Go to World Net Daily’s Superstore and let them know what you think of their faux shirt. You can also make your displeasure known to Joseph Farah, the editor and CEO of World Net Daily, by sending him an email at jfarah@worldnetdaily.com .

I fully support capitalistic endeavors. One of the hallmarks of our capitalist system is copyright protection which preserves the rights of the person who first created the literary expression. Unfortunately, WND probably has much deeper pockets than a blogger in North Carolina and any legal action would be too costly to pursue. That said, there is nothing to stop the blogger community from shaming World Net Daily into doing the right thing. Making knock-offs is something that I would expect from Red China and not from a supposedly conservative organization. If Mr. Farah wants to emulate the ChiComms, he is free to do so but we don’t need to approve of it.