I met Rob Morse on the last day of the recent Gun Rights Policy Conference. It turns out he was a fellow gun blogger and had a blog named Slow Facts. We spent a few hours in Chicago O’Hare chatting while waiting for our respective flights home, me to North Carolina and Rob to Southern California.

Rob is an engineer by training and he applies that same clarity of thought to piercing the gun prohibitionists’ arguments against national reciprocity for concealed carry in this article.

Defenders of the existing feudal licensing scheme claim that their state has special needs. (Yes, there are a few “special needs” states in these United States. They have been taking the short bus for years now.) So what! Of course each state tests its drivers in slightly different ways to obtain a license. Some towns allow right turns at a red traffic light, and others don’t. We now post traffic signs so the regulations are explicit and not a matter of local knowledge. Gun laws also differ slightly from state to state, and most of the differences are similarly arbitrary.

It is as if California didn’t allow you to cross the border in your pickup truck because your truck is not on their list of approved vehicles. At the border they say, “In our state, we only let certain people drive that kind of truck. Now why would you be needing one?”

Rob makes a very perceptive argument when he says that one of the major reasons some politicians oppose national reciprocity is that visitors will make the locals look bad by comparison. In other words, when the people of California or New York or New Jersey see visitors carrying concealed, legally and safely, they will begin to wonder why the heck they don’t have the same rights as the visitors.

Read the whole post as it does an excellent job is demolishing the arguments of Mayor Bloomberg and his Illegal Mayors with their Our Lives, Our Laws campaign.

The Black Man with a Gun, Rev. Kenn Blanchard, gives his take on the 2011 Gun Rights Policy Conference in this video presentation. It was really good sharing some time with Kenn in Chicago who, by the way, gave the opening invocation for the Conference.

Mark Vanderberg and Doc Wesson of the Gun Rights Radio Network filmed (or more accurately, videoed) both days of the Gun Rights Policy Conference held this past weekend in Chicago. They have taped their live feed and have made it available for those that just could not make it to the conference. This is over 13 hours of video.

For those that are unfamiliar with the Gun Rights Radio Network, it now features approximately 24 podcasts on topics ranging from gun rights to gunsmithing. It includes people such as Michael Bane, Massad Ayoob, Bob Mayne, Doc Wesson, and, of course, the Gun Dudes. It is a voluntary project started by Mark that grew out of his Gun Rights Advocates Podcast. As Mark says, this isn’t about guns, it is about freedom. If you’d like to listen to any of the podcasts or, more importantly, make a donation go to this link. GRRN exists on voluntary subscriptions and donations. It is totally a grassroots effort funded by people like you and me unlike the Joyce Foundation funded gun prohibitionists.

The 2011 Gun Rights Policy Conference is over and the attendees should be home by now. I think it was a good event attended by a lot of committed individuals who gained a lot of knowledge that they can bring home to use in the fight for our rights.

My first impression is that compared to last year there were more women – especially younger women – and there were definitely more African-Americans. This is good news as it shows the broadening of the gun rights movement and increases our depth. I noticed that many of the younger women dressed for the occasion. When I mentioned this to the Complementary Spouse she said it was because when women attend a conference that they consider important they dress for it. That they considered it important is a great sign.

Project Gunwalker was prominently featured at the conference. David Codrea, Dave Workman, and Mike Vanderboegh all attended the conference. Codrea and Workman also did a panel presentation on it and gunwalking was mentioned by a number of other presenters as well.

One thing that Dave Workman said after the opening night reception really struck me. A few people were gathered together discussing it and Dave noted how the ATF managers were giddy when guns were found at crime scenes that traced back to Operation Fast and Furious. Dave said with much anger in his voice that for it to be a crime scene that it meant someone’s husband or wife or son or daughter lay on the ground dead or bleeding to death. Moreover, they lay there dead or dying because someone in our own government wanted to build support for his or her agenda. That was very powerful.

The current SAF legal cases were discussed and more will be coming. Either today or tomorrow, a new case will be launched in Omaha, Nebraska challenging their regulations. I don’t have the details yet but will report on them when I can see the complaint. And on a happy note, the City of Chicago had to cough up almost $400,000 in attorney’s fees for the McDonald case which was received this past week.

I am still digesting the information that I gathered over the weekend and will be reporting on it over the next week. In the meantime, if you go to Twitter, do a search for tweets with the #GRPC hashmark. I put out a number of tweets as did Thirdpower, Tom Gresham, and the ProArms podcast people. Massad Ayoob also did some posts of his blog with a summation of each day’s events. Day one can be found here and day two is here.

On a final note, I have been reading Professor Adam Winkler’s book Gun Fight which details much of the back story behind District of Columbia v. Heller. For those that don’t know, this case was personally funded by Bob Levy who is now Chairman of the Cato Institute. On my way home to the mountains of North Carolina, I ran into Mr. Levy. He was taking the same flight to WNC as I was. I could not think of a better or more fitting end to the weekend than to meet the man who helped insure that the Second Amendment remained a viable part of the Bill of Rights.

UPDATE: Thirdpower at Days of our Trailers has pictures up from all three days of the conference. You can find them here, here, and here. He’s a good photographer and even made me look good! There are also a number of pictures up on ISRA’s Facebook page.

UPDATE 2: Rob Reed is the Detroit Gun Rights Examiner. I first met Rob at the Lucky Gunner Memorial Day Blogger Shoot. He has an article up about the conference here and discusses in detail the award won by David Codrea as the CCRKBA Journalist of the Year.

Alan Gura and Rhonda Ezell were both at the opening reception of the Gun Rights Policy Conference tonight. Ms. Ezell is the lead plaintiff in Ezell v. Chicago. While I don’t think you can see it in the photo, she was wearing a pair of silver 1911 earrings which were really cool.

I wonder if wearing a pair of 1911 earrings is considered open carry in Chicago. 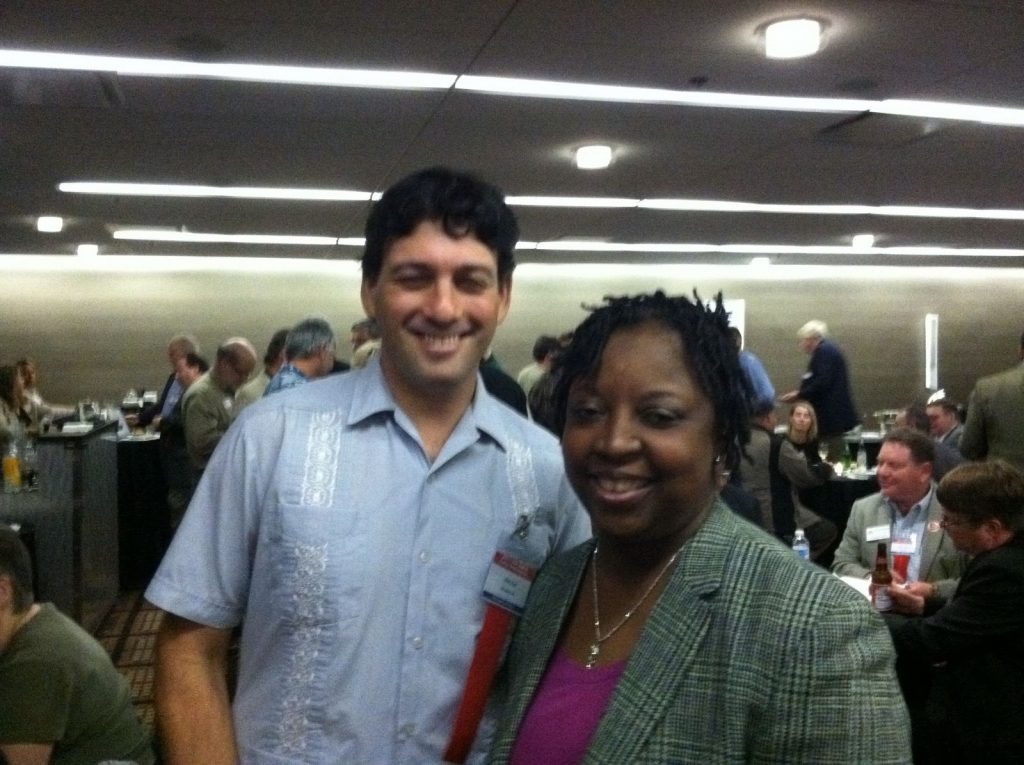 Among the bloggers that I met at tonight at the opening reception of the 2011 Gun Rights Policy Conference were Thirdpower (right ) of Days of Our Trailers blog and David E. Young (left) of On Second Opinion. David is one of the foremost authorities on the original documents concerning the Second Amendment. 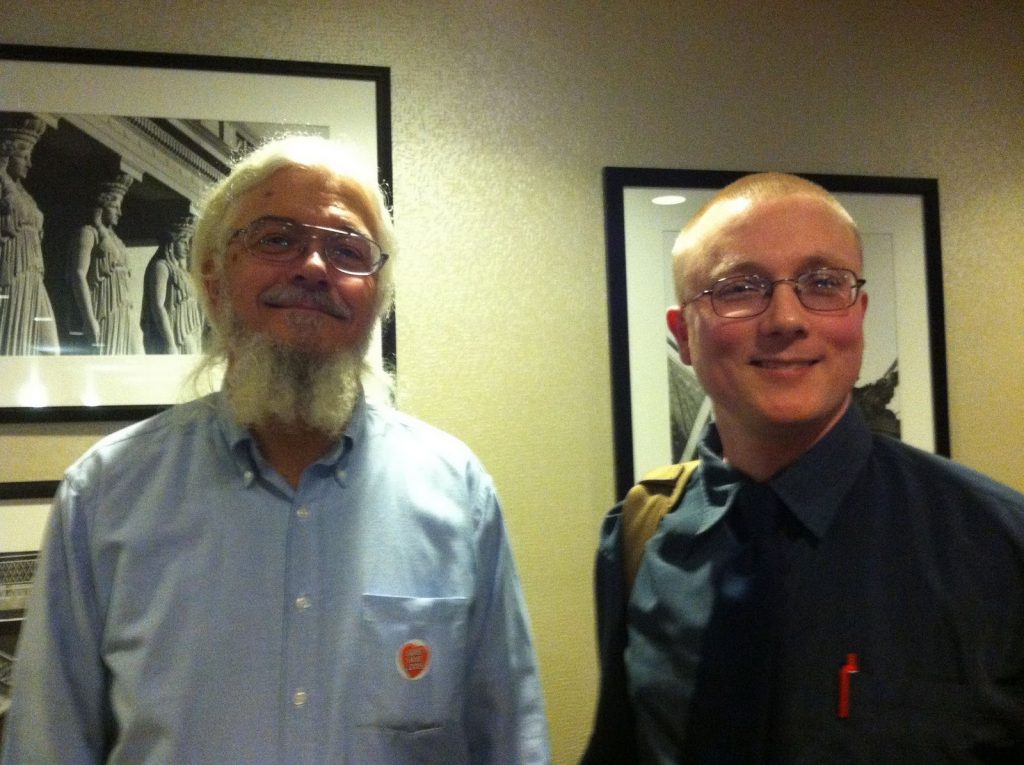 Among the podcasters I met at the opening reception for the 2011 Gun Rights Policy Conference were Eric Shelton (left) of the Handgun Podcast and Mark Vanderberg (right) of the Gun Rights Advocates Podcast and the organizer and head of the Gun Rights Radio Network. I also spoke with Rev. Kenn Blanchard of the Black Man with a Gun podcast. 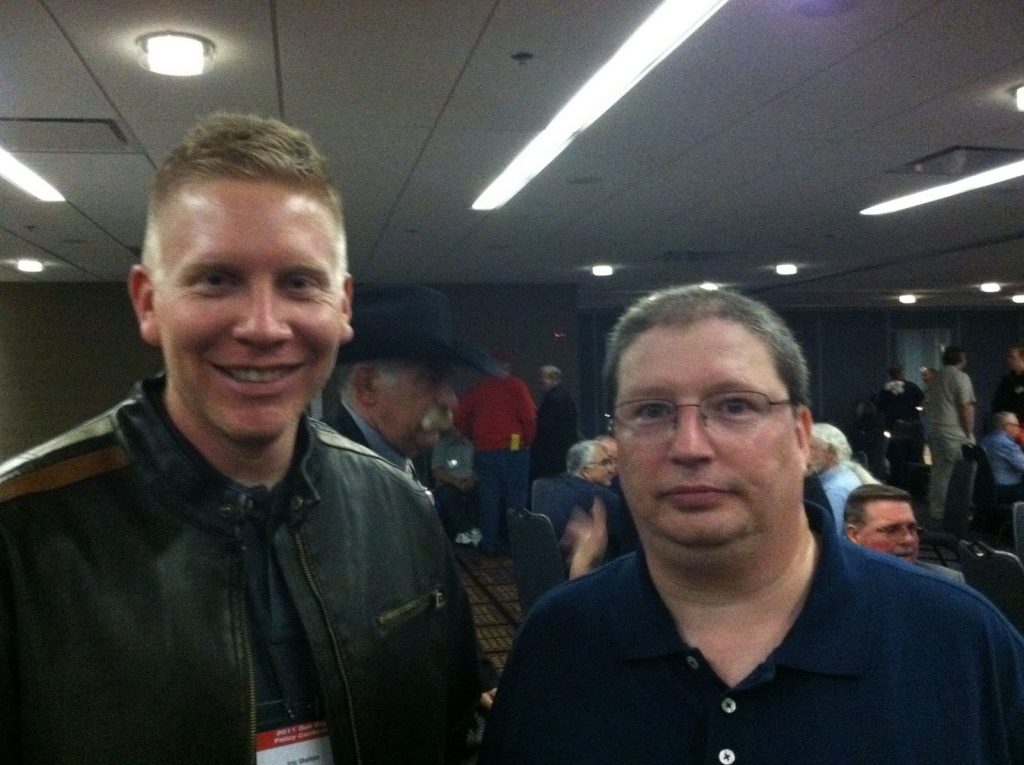 I’m getting ready to leave for the airport for the flight to Chicago by way of Detroit. I get to go to all the best cities!

It is hard to believe that after all these months the Gun Rights Policy Conference begins in less than 12 hours. I will try and post some pictures from the opening reception tonight on the blog.

I plan to Twitter and blog throughout the conference so stay tuned.

The Second Amendment Foundation has put out this reminder about the 2011 Gun Rights Policy Conference to be held this weekend just outside of Chicago in Rosemont, Illinois.

BELLEVUE, WA – Gun rights activists from across the country will gather this weekend Sept 23-25 at the Chicago O’Hare Airport Hyatt Regency hotel for the 26th annual Gun Rights Policy Conference, sponsored by the Second Amendment Foundation and Citizens Committee for the Right to Keep and Bear Arms.

SAF Executive Vice President Alan M. Gottlieb said pre-registration of over 700 for this weekend’s event suggests there will a great turnout, not only by Illinois activists, but also firearm owners from as far away as Hawaii and Pureto Rico, as well as neighboring Indiana, Ohio, Wisconsin, Iowa and Missouri. This event is free, and includes a Saturday awards luncheon that will recognize the accomplishments of gun rights leaders from the national level down to the grassroots.

“Since last year’s SAF victory in McDonald v. City of Chicago before the U.S. Supreme Court, we’ve been looking forward to this weekend’s gathering,” Gottlieb stated. “We are joined by members of the Illinois State Rifle Association, which joined us in the McDonald case, and by our expert legal team that made it happen.

“It is only fitting that we gather in the Windy City,” he continued, “not only for this important conference, but also to celebrate the Supreme Court victory. This was a win for all gun owners, because the high court incorporated the Second Amendment to the states, thus paving the way for challenges to onerous state and local gun laws and regulations that have placed onerous restrictions on a fundamental civil right.

This year’s jam-packed agenda features panel discussions covering current and possible future legal actions, the importance of election outcomes to the federal courts and Supreme Court, gun politics, legislative challenges and more. Experts from virtually all corners of the gun rights movement will be on hand, and the annual awards luncheon on Saturday promises to be a crowd pleaser.

“We look forward to a very active and productive weekend for firearms freedom,” Gottlieb stated.

I leave Friday for the Gun Rights Policy Conference in Chicago. I intend to both blog and Tweet extensively from the conference. Given the lineup of speakers, signing up for Twitter would be a great way to follow the action if you can’t be in Chicago.

If you look in my sidebar, you will see a section near the top that says “Subscribe to this blog”. Among the methods for subscribing is Twitter. You click on the button that looks like the one below and it will take you to my Twitter page. My Twitter ID is @jpr9954.

Thanks and I hope to have lots to report from Chicago in the never-ending fight for gun rights.