I listened to Donald Trump’s speech at the NRA-ILA Leadership Forum yesterday. Two things stood out for me. First, and most important, I really do believe that Trump understands the issues surrounding the Second Amendment and gun rights. In his speech he referenced the makeup of the Supreme Court, judges, concealed carry permits, the threats to the Second Amendment, self-defense, and gun free zones.

The latter two, self-defense and gun free zones, are two areas that he really highlighted. Noting the Paris Massacre in a gun free zone, Trump said he doubted that it would have gone on long if held at the Annual Meeting due to the number of armed citizens. (As a sidebar, due to the Secret Service and their protective rules, Trump *was* speaking in a gun free zone.) Trump spoke of single moms in Florida and grandmothers in Ohio that would be left defenseless if Hillary was elected. That lead to his newest nickname for Clinton as “Heartless Hillary”. Though, he admits, he still really likes “Crooked Hillary.”

Second, listening to a Trump speech is an exercise in patience. This is not because of what he says but how he says it. The man has a severe case of attention deficit disorder when it comes to public speaking. He’d start out on a topic and then …SQUIRREL! and he’d be off on a tangent. He makes some good points but he can be damn hard to follow.

I read some discussion yesterday on Sebastian’s blog on whether or not the NRA should have endorsed Trump. In my opinion, the NRA did not have much of a choice. They deal in realpolitik. Their avowed foe Hillary Clinton has doubled down and made gun control, the Second Amendment, and the NRA her number one target.

This is a two-person race unless Bernie decides to run as an independent which Trump encouraged in his speech. The NRA has to pull conservatives who supported other candidates and gun owners who don’t trust Trump back into the fold. Without them, Hillary most likely will win and the Second Amendment will be lost as an actual civil right. It will become a historical artifact. That is something the NRA can’t live with and I certainly won’t live with.

Everyone and their brother seems to be heading to the NRA Annual Meeting. It took us an hour to get through the gates coming of Interstate 65. That seems the norm no matter which road you are coming in from.

That is, except if you are coming in through Gate 6. We saw very few people coming in that gate and no holdups. Gate 6 is accessed off of Preston Highway. See the map below. 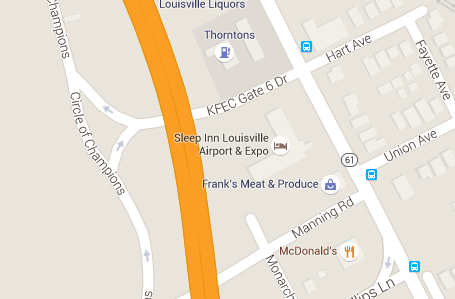 I’m probably going to jinx things but I consider this a public service.

I get a number of press releases from firearms manufacturers, tactical companies, and outdoor companies. With the NRA Annual Meeting fast approaching, this number is increasing. Below you will see a press release I got yesterday. I am presenting it without comment as any comment I’d make would be considered either snarky or snobbish.

2016 NRA Convention Invitation
Drop by booth 2662
MKS Supply, LLC, Dayton OH May 2016-
MKS Supply the exclusive marketer of Hi-Point Firearms and Inland
Manufacturing (.30 caliber M1 Carbine and new 1911s) invites all
attendees at the 2016 NRA Convention to drop by and see these and some
new (not yet released firearms).
So, if you are attending the NRA convention we hope you will stop by the Hi-Point/MKS Supply booth 2662
and talk guns with Charlie, Ron and the gang. You will learn about some
neat new things to come and see some really popular (and new model)
guns.
MKS Supply, LLC
8611-A North Dixie Drive
Dayton, OH
45414
937-454-0363
www.mkssupply.com

I came across this US Whiskey Map today. With the growth of small craft distillers, it is not a complete map. For example, here in Asheville, we have the Asheville Distilling Company which produces Blonde Whiskey which is a mix of Turkey Red Wheat and White Corn.

Who knows? We may just run into you at one of these bourbon distilleries!