I will have very light to non-existent blogging this week.

We are in St. Louis to check up on my mother-in-law, see the rest of the family, introduce my granddaughter Olivia Grace to her great-grandmother, and the like.

I will also get a chance to meet Charlie Foxtrot of Not One More Gun Law. He has been helping tremendously on The Polite Society Podcast.

If I am lucky I will also get some pictures of the Mississippi and the Meramac Rivers. I have never seen them so high. The Meramac is supposed to crest at 35.9 feet today in Arnold. Flood stage is 24 feet.

Memorial Day is set aside to remember those men and women who died while serving our country in the armed services.

A recent family reunion and subsequent visit to my father’s grave got me to thinking about those who didn’t die while on active duty but who had significantly shortened lifespans due to their military service. 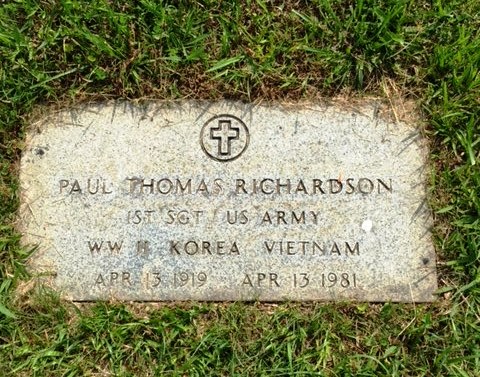 My dad was medically retired with 60% disability after 28 years of active duty service in the US Army. According to his DD 214, the effective date of his retirement was April 14, 1972. This was approximately a year after he returned from Vietnam on his second tour of duty there. I should be clear that my dad’s medical retirement was not due to combat-related injuries but rather due to angina, ulcers, and other maladies. These are typical stress-related illnesses.

As you can see from the headstone, my dad died eight years and 364 days after he was retired from the Army. He had turned 62 just days earlier. (The date of birth on the headstone is erroneous – it should be April 3, 1919).

According to studies done by Department of Defense actuaries, active duty retirees have a higher mortality rate than do their reserve component peers. This disparity increases for enlisted retirees as compared to officers. The study was done on non-disabled retirees who were age 60 plus.

Defense officials haven’t done a study to explain death rate differences among military retirees. Speculation centers on stresses of full time service including past wars, frequent moves, constant physical activity to stay in shape, and stress-induced habits such as smoking and alcohol consumption…

Tom Bush, a senior policy official for reserve affairs, suggested to the board last August that more active duty retirees might have used tobacco or alcohol more often than did reservists. Hartnedy suggested post-traumatic stress might be a factor, even controlling for VA-rated disabilities.

“I would think that kind of mental strain” from years on active duty “would have an impact…very long term, after retiring,” he said.

As to the suggestion that active duty retirees might have “used tobacco or alcohol” more often, it was common and it was expected that you drank and smoked. Cheap booze and cheap cigarettes were the rule in the Army of the 50s, 60s, and 70s. It was a part of the culture and I think stress was a contributing factor to overuse.

My dad arrived in Cam Ranh Bay, Vietnam at the age of 48 in 1967. He returned to Vietnam in 1970 at the age of 51. He was a middle-aged man with white hair. While he never complained of it being stressful, I imagine it had to be especially since it was hard to distinguish friend from foe. Even though he served in what was essentially the rear echelon, it was still a war zone.

I think about all of those more recent veterans who have served in either Iraq or Afghanistan or both. Just like in Vietnam, the front lines are blurred. Even if they weren’t injured in an IED explosion or a suicide bombing, the possibility was there. I think the actuaries and epidemiologists will have their hands full in years to come conducting studies on these vets. I have to wonder how much their life expectancy has been shortened by their military service.

So on this Memorial Day, let’s remember all of those who died while in service to our country. Let us also remember those who, while not dying in active service, died a lot sooner than they should have.

I have been battling a cold and have been reluctant to hold Olivia Grace for fear of passing it on to her. However, last night I covered myself in Purell and got to hold her for the first time.

She had just eaten and was taking her post-prandial nap. Her weight of 7.7 lbs doesn’t sound too heavy in the abstract but when you hold her she feels quite substantial.

Though you can’t see it because of her cap, she has a full head of curly hair. She is and will be a cutie. 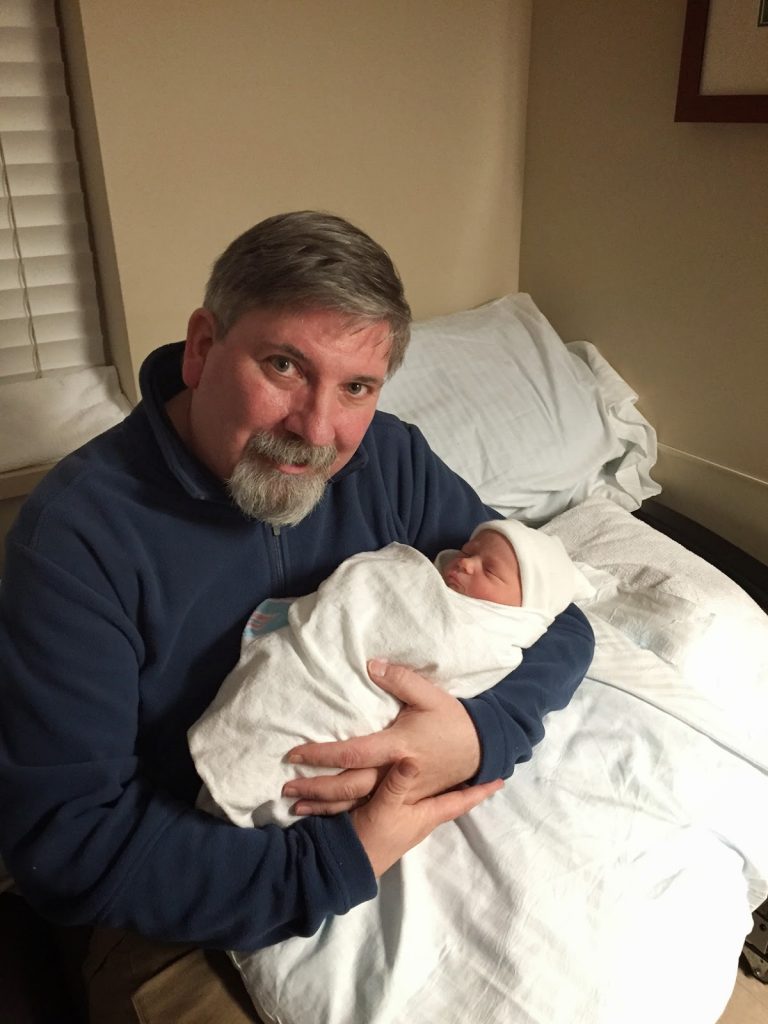 My heart just got stolen. The thief is named Olivia Grace Miller.

Little Miss Olivia Grace was born this morning at 2:19am to my step-daughter Laura. Can you believe that? Born at 2:19 on 2/19. And it was Laura’s official due date to boot. Olivia Grace came into this world weighing 7.7 lbs and 20 inches long.

Both mother and baby are doing fine which is a blessing unto itself. Laura was a real trooper. She fought through the pain and delivered Olivia Grace naturally. It wasn’t easy but she hung in there. And as she said this morning, no anesthesia bill!

Blogging will be sporadic until the New Year.

We are out in the frozen tundra of flyover country visiting family as well as cleaning out the Complementary Spouse’s mother’s house getting it ready for an auction. Grace is now living in a senior living center now and it is time to sell.

It is incredible how much stuff can be accumulated over 84 years of life, 50 years of marriage, and three kids!

My job is to sort through the financial records deciding what to keep and what to toss. The only problem is that they kept records of such good detail that it would cause a tax accountant’s heart to flutter.

So, in the meantime, enjoy playing with your presents and cherish your time with family.

The Halo 4 Global Championship Finals were held this weekend in Seattle in conjunction with PAX Prime 2013. The event was hosted by Microsoft in Benaroya Hall. Over 140 gamers from around the world who had qualified for the event were competing for $500,000 in prize money with $200,000 going to the winner.

As I’ve mentioned in the past, the Complementary Spouse’s nephews are big gamers and play Halo. Her 20-year old nephew Aaron – gamer name LX Ace XL – is a junior at the University of Kentucky majoring in chemical engineering.

We found out that “Ace” made it to the semi-finals earlier today. Then we found out that he made it to the finals and a chance to play for $200,000. At the very least, he would take home $75,000 for second place. “Ace” would be going up against “Pistola” who has been one of the top Halo players for the last few years and widely considered the favorite in the tournament.

The format of the finals was a head to head, one on one, match-up with the player getting the most kills in 10 minutes the winner. If it ended in a tie, then a second round would be played with the first player getting a kill declared the winner. It was the ultimate of sudden death playoffs in the gaming world.


So when all was said and done, “Ace” or Aaron won. He turned out to be the quicker and better shot at the end.

He gets publicly congratulated by his older brother Kyle – a top player in his own right under the name Elamite Warrior.

And, he gets a nice hug from the hotty announcer Jessica Chobot.

Not a bad for an afternoon in Seattle. So congratulations to Aaron for a game well-played and for being an all-around nice guy.

Sometimes mundane things like visiting family and playing with puppies take precedence over the events of the day.

And you know what? That is the way it should be.

Puppy pictures will be posted in a couple of days.

I don’t think I’ve ever played the video game Halo but the Complementary Spouse’s nephews are professionals at it. Literally.

Her nephews Kyle and Aaron were professionals on the Major League Gaming circuit until Halo was dropped from the lineup this Spring. Kyle, or as he is known in the gaming word, Elamite Warrior, and some of his friends put together the parody video below. I think they did a good job of it.

I know just enough about Halo to understand that Capture the Flag is one of the major scenarios in team play. The main reason I’m posting this is that Kyle is family and family is important. He’s trying to build the viewership of this video so take a look at it and share it with your friends.

One Direction, by the way, are the musical guests on SNL tonight.

The Complementary Spouse’s daughter is getting married on Saturday. Because of this, there will be very little blogging from now through the weekend.

To make it even better, his dad is a gunnie who has been active in shooting high power rifle competitively. He and I have a great time talking guns when we get together.

So please join me in wishing the future Mr. and Mrs. Jeremy Miller a long, happy, and prosperous life together.