I’ve read a number of books on the Bush War in Rhodesia over the years and have seen (online) a number of parts kits built FALs. However, the FAL that Larry Vickers and Ian McCollum examine in the video below is an actual Rhodesian Army FAL right down to the ground-off South African markings.

In another video just released by Larry himself, you can see him shooting this Rhodesian FAL in both semi-auto and full-auto mode.

Not to get all political but one wonders what the former Rhodesia or Zimbabwe as it is called today would be like if it had not been caught up in both post-Colonialism and the Cold War. If Harold Wilson and the Labour Party had not been in power in the UK in 1965, would Ian Smith and the Rhodesians have felt compelled to declare independence unilaterally? Ah, the what-ifs abound.

The Wall Street Journal ran an article on the conflict in Syria this past Monday. It was not the war news that caught my eye but the photo that they used to illustrate it. The photo from Reuters featured a Syrian rebel sniper preparing to shoot from inside a concrete and sandbag bunker. His weapon? A FN-FAL with a big rifle scope.

If you check out the front iron sights as well as the curve of the buttstock, you know that he is using a FN-FAL.

I don’t have any training or expertise as a sniper but I think the young man might have been better served if he used a sandbag rest for his FAL and had fired from further back in the bunker so as to minimize his muzzle flash.

I came across a study this week from the Small Arms Study on the firearms used in the Libyan Civil War that overthrew Muammar Gaddafi. The Small Arms Study is an independent research project located at the Graduate Institute of International and Development Studies in Geneva, Switzerland. Their research focus is on the spread of small arms and light weapons which they consider a threat to “human security”. While generally what we would consider a gun control organization, their research is leagues ahead of anything that might come out the gun prohibitionists such as the Violence Policy Center.

This study found that the most common rifle seen on the battlefields of Libya after the ubiquitous AK was the FN-FAL.

After Kalashnikov-pattern rifles, Fusil Automatique Léger (FAL) rifles were among the most frequently sighted
firearms during the 2011 armed conflict in Libya. A number of FAL rifles used during the conflict were subsequently recirculated throughout the broader sub-region. Indeed, between 2011 and 2013 FAL rifles
reportedly smuggled from Libya were seized or documented in several countries, including Algeria, Lebanon,
Niger, Syria, and Tunisia.

Although factory markings, serial numbers, and technical characteristics do not provide conclusive proof of the
age or end users of Belgian FAL rifles used in the Libyan conflict, they do allow useful inferences to be drawn. This report discusses the basis of such inferences and offers guidance on data gathering with a view to advancing our general knowledge of the use and circulation of Belgian FAL rifles and encouraging relevant authorities to step up tracing efforts.

Evidence suggests that most of the FAL rifles used in Libya in the 2011 conflict were FALs of Belgian production
(FN FALs). Belgian records document authorized exports of 46,260 FN FAL rifles to Libya from
1969 to 1988, though the actual number of rifles exported may be lower. In addition to direct sales from Belgium, re-exports of FN FALs from other countries to Libya may have occurred before or during the 2011 conflict. Illicit sales of FALs to actors in Libya through underground arms merchants may also account for a portion of the rifles used during the 2011 conflict.

The study goes into extensive detail about serial numbers and receiver variations seen in FN-FALs. While some might find this boring, fans of the FN-FAL like myself  will find it quite interesting. I’d recommend downloading and reading this short (8-page) study.

I was reading a story about a letter sent by Republican congressmen calling out President Barack Obama and Attorney General Eric Holder demanding enforcement of existing firearms laws before consideration of any new laws. However, that isn’t what caught my eye. Look at the picture below of firearms confiscated in Chicago. The photo is credited to the Associated Press and I presume it is from some sort of show and tell put on by the Chicago Police Department. 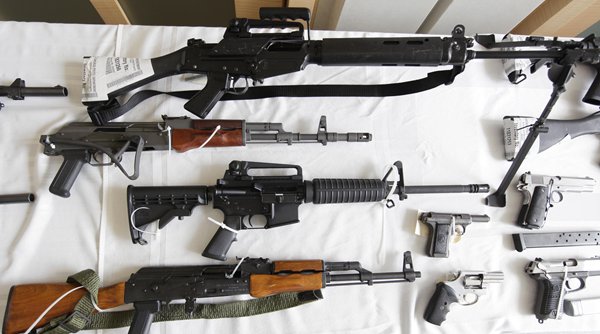 My eye immediately went to the top rifle in the photo. I see the carrying handle from both an AR and the FAL. then I look at the handguard and front sight. It is an FAL! What the hell?

I have never seen a FN-FAL or any of its variants with an AR carry handle/rear sight scabbed on to it. I wish I had a better photo but it appears that it is part of the dust cover.

That the firearm was confiscated I don’t doubt. However, I would be really shocked to hear that it from confiscated from either a crime scene or taken from some gang banger. If you told me it came from a crime scene in Sao Paulo or Buenos Aires I might believe it but not Chicago. Moreover, it doesn’t look like the only one in the photo. Check out the stock of the rifle that is under the leg of the Franken-FAL’s bipod. It appears to me a FAL as well.

ITS Tactical posted this picture from SHOT. It is a FN-FAL with a Magpul angled fore-grip. The picture was taken at the Magpul booth. I wonder if this is an adaption or purpose-built for the FN-FAL. Hmmm? 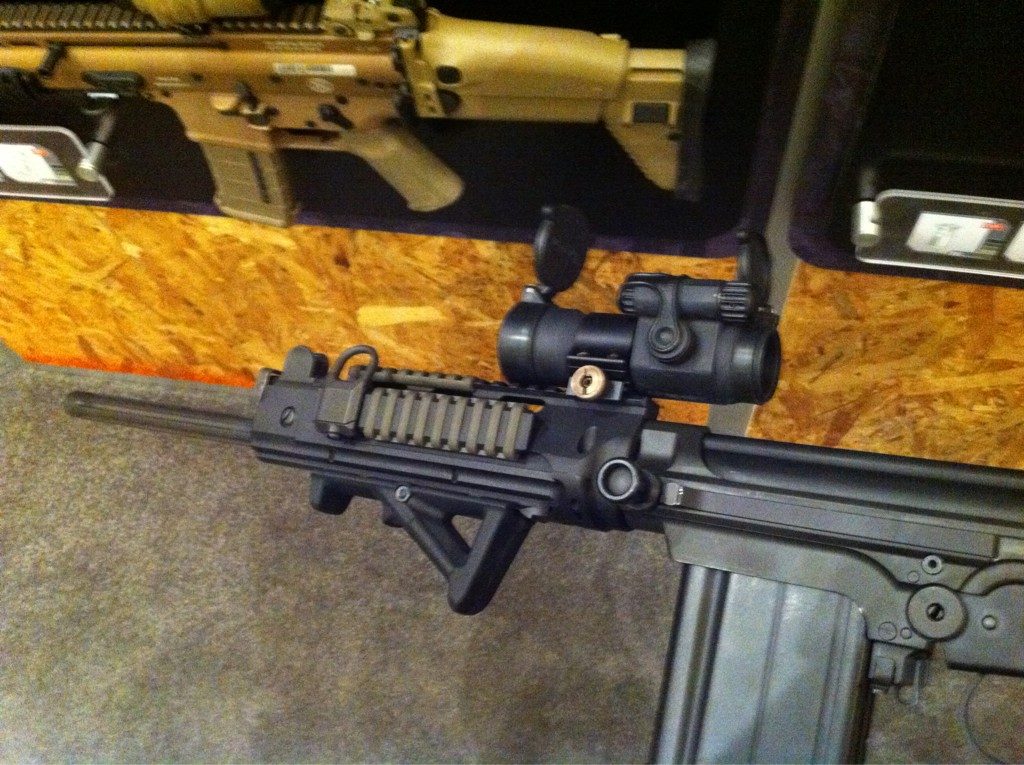 I now have my first battle rifle. It is a FN-FAL that was assembled for me by CMP Armory.

CMP Armory is a small gunsmithing company located in Dallas, NC. They came highly recommended and they did a fantastic job for me. Both Moses (aka Johnny) and James were easy to work with.

I had purchased an Imbel parts kit from a private ad on the FALFiles Message Board. The guy selling it decided that after getting the parts kits and most of the compliance parts that his interests lay elsewhere. I then obtained a DSA Inc. Type II upper receiver which is American made.

CMP assembled the rifle, refinished it in matte black KG Gunkote, did a trigger and accurizing job, and then added their own Hurricane flash hider to it. Jim Rawles on the SurvivalBlog has spoken very highly of this flash-hider.

I would have posted pictures of the fine job that they did but the Complementary Spouse is out in St. Louis with her mother (aka the Complementary Mother-in-Law) and she took my digital camera with her. A cell phone picture wouldn’t do this rifle the justice it deserves.