Stephen Gutowski of the Free Beacon alerted readers to this on Twitter. Shannon Watts, the head Demanding Mommie, intentionally misquoted Marion Hammer who was testifying on the proposed constitutional amendment in Florida that would effectively ban all semiautomatic firearms.

At a Tallahassee hearing on prohibiting assault weapons, @NRA lobbyist Marion Hammer said: “How do you tell a 10-year-old girl that the rifle she got for Christmas is an assault weapon and she has to give it up or risk arrest on felony charges?” #flapol https://t.co/aPVGTNYbx1— Shannon Watts (@shannonrwatts) August 16, 2019

Marion Hammer is not my favorite person as anyone who has read this blog knows. However, I happen to believe that you really should quote what the person says accurately regardless of whether you agree with her or not.

In this case, what Marion really said is much more innocuous. Indeed, I think only the true believer gun prohibitionists would object to it.

From the Tampa Bay Times with the actual quote:

“How do you tell a 10-year-old little girl who got a Ruger 10/22 with a pink stock for her birthday that her rifle is an assault weapon and she has to turn it over to government or be arrested for felony possession?”

Shannon Watts knows how to play to an audience. If she has to lie as she plays the audience, so be it. Case in point -she was in Charlotte this past week for an event at Johnson C. Smith University billed as a “community conversation” on “gun violence” (sic). My friend Josette from Grass Roots North Carolina was in the audience and heard Watts say, ” there is NO background check to purchase an AR.” I’m sure some in the audience might believe that but it is an out and out lie. If called out on it by you or me, we’d be accused of bullying the “stay-at-home mom of five” which, by the way, is another of her inaccuracies.

I have been getting multiple releases announcing new products on a daily basis for the last month in anticipation of the SHOT Show. Some are line extensions and some are entirely new products. Not that they aren’t all of interest but this one really caught my eye.

Umarex will now be producing an officially licensed air rifle replica of the Ruger 10/22. I think it caught my eye because the Ruger 10/22 was the first gun I ever bought. I was 18 and it costs a whole $55 at Best Products in Greensboro. There is no word on the price of the Umarex replica.

The level of detail in the Ruger 10/22 Air Rifle transcends its looks. “Umarex did a great job in developing the 10/22 Air Rifle,” said Ruger Vice President of Marketing, Rob Werkmeister. “We are truly impressed by the level of authentic detail and craftsmanship incorporated into this airgun, and we are proud to be affiliated with a company that shares our passion of providing quality products and exceptional service for shooters around the world.”

The 10/22 Air Rifle from UMAREX was designed to shoot .177 caliber pellets, the most readily available and most popular selling airgun caliber for recreational shooting. The magazine is authentic in shape and the magazine release pushes forward in authentic fashion giving you the ability to pull the magazine from the receiver. The magazine holds a red, removable rotary clip that accepts 10 flat or round-nosed pellets instead of the traditional .22 LR cartridge and is cleverly held in the magazine by a sliding lever, which allows for the easy exchange of a pre-loaded clip available as an accessory.

The bolt, while seemingly there for aesthetics, since it does not load a pellet into the chamber, serves to cock the rifle when actuated, giving the 10/22 Air Rifle a delightful three-pound trigger pull. The weight of the trigger and its identical overall size makes it an ideal rifle for first-time shooters whose natural next step up is the Ruger 10/22 chambered for .22 LR.

Loading quality UMAREX CO2 into the rifle is easy. With the twist of a button at the rear of the butt stock the buttpad slides out to reveal an incorporated Allen wrench. That wrench is used to remove a long cylinder inside the stock that punctures two, 12-gram CO2 cartridges when installed back-to-back within the stock of the rifle.

Beyond its function, the 10/22 Air Rifle is slightly lighter than the firearm, but looks the part. The sights are authentic in style, including the folding rear sight, and the rifle has authentic looking sling attachments incorporated. The receiver is ready to accept after-market rails that fit the Ruger 10/22 so that you can customize your Ruger 10/22 Air Rifle with the optic of your choosing.

Since the Parkland High School shootings, you have heard all manner of politicians from the president on down saying that we need to raise the age to buy a semi-automatic rifle to age 21. They along with the media have painted a picture that wants you to believe one thing when the reality is totally different. 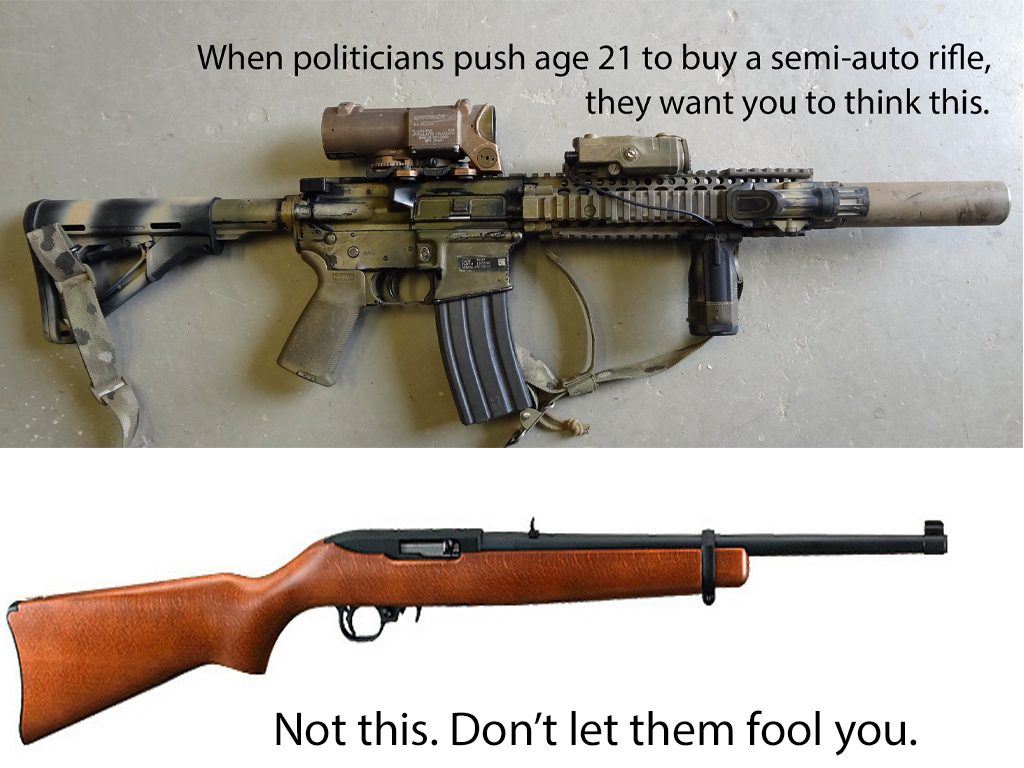 I was 18 when I purchased my first firearm. It was a Ruger 10/22 similar to the one shown in the meme. I paid $55 for it at a long ago closed discount store called Best Products. I used my savings from mowing lawns and my job as a school bus driver.

Ruger is getting into the 10/22 replacement trigger market. They just announced the BX-Trigger which is a drop-in trigger module for the 10/22. It reduces the trigger pull from approximately 6 pounds to 2.5 pounds. The BX-Trigger will go on the market starting this Friday. It will be available directly from Ruger and from many retailers. The MSRP on the BX-Trigger is $89.95. 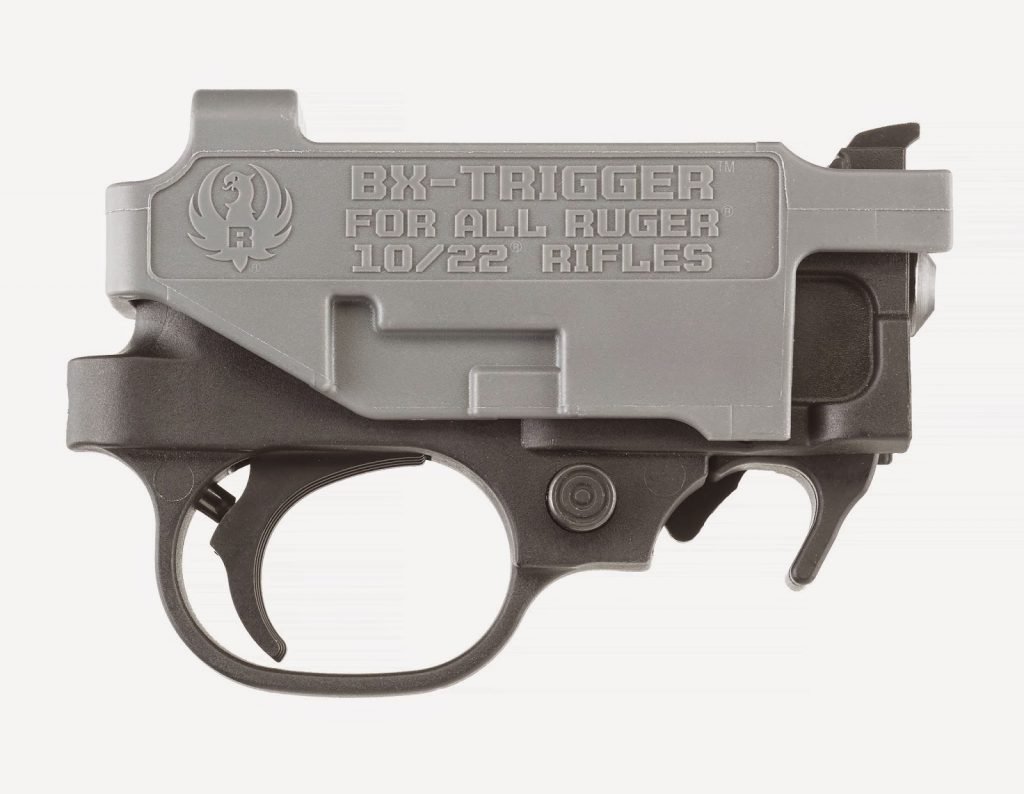 If I had to guess, someone at Ruger realized that they could be making good money in the 10/22 after-market parts business that they were losing to companies like Volquartsen. I don’t know without testing how the new BX-Trigger will compare to the Volquartsen components but the complete module sells for about what Volquartsen sells their match hammer and sear.

The release from Ruger is below:

Sturm, Ruger & Company, Inc. (NYSE: RGR) announces the launch of the BX-Trigger™: a light, crisp, “drop-in” replacement trigger assembly that is compatible with all Ruger® 10/22® rifles and 22 Charger™ pistols. The BX-Trigger is a Genuine Ruger Factory Accessory and is the perfect upgrade for all 10/22 rifles and 22 Charger pistol models because of the significantly reduced pull weight of approximately 2.75 pounds (versus 6 pounds on the standard 10/22 trigger).

“We have made continuous improvements to the 10/22 over the years, but the BX-Trigger is an exciting performance advancement,” said Ruger President and COO, Chris Killoy. “The BX-Trigger was designed for easy installation, superior performance, and legendary Ruger reliability. Like the popular BX-25® magazine for the 10/22, the BX-Trigger will deliver the excellence and value that shooters have come to expect from Ruger.”

The BX-Trigger is sold as a complete assembly that “drops in” to replace the existing trigger assembly, with no additional adjustment or “fitting” required. A video of the installation process can be found at Ruger.com/BX-Trigger

Beginning December 19, the Ruger BX-Trigger will be available for purchase directly from Ruger at ShopRuger.com or from local independent firearms retailers.