When the Tennessee legislature voted earlier this year to allow campus carry on state university campuses, they limited it to full-time employees of the schools. Moreover, in an effort to appease the governor and university administrators, they put the liability for accidental/negligent discharges on the employee.

Liston Matthews, the Knox Gun Guy and a retired college instructor himself, has done yeoman’s work in getting details from the UT Police Department on what’s required and the necessary forms.

Desiring to get the straight facts, I emailed Lt. Mike Richardson of the University of Tennessee Police Department. I also wanted the form that UT employees must complete in order to comply:


I am working on an article for my blog knoxgunguy.com, about the new law effective July 1. I know that they are required to notify UTPD in writing of their intent to carry.


Thank you for your help?


Is there a specified format?
There is a registration form that must be completed at UTPD and witnessed by a commissioned officer.


Is there a form they are required to complete?
See first question and response.


Are they required to register their handgun with UTPD, or only supply information about themselves?
The full-time faculty/staff must only register themselves and their permit number, not the handgun itself.
You can also visit our department website, which should answer any other questions you may have.

Notice that Lt. Richardson (no relation) mentioned the form required to be completed. However, he did not send a copy with his responses. It took a bit of back and forth before Liston was able to get that form. Perhaps it was the mention of his attorney that shook it loose. You can see the form here.

Nashville’s The Tennesseean has a long story on both the bill and the reaction around Tennessee campuses to the coming change. For a large newspaper it was both fairly accurate and fairly evenhanded. I recommend reading it.

Thanks to Liston for his work in prying loose the form and answers from the UTPD.

Yesterday, I reported that Maj. Gen. Max Haston, the Adjutant General of the Tennessee National Guard, had authorized the carry of firearms by Guardsmen and Air Guardsmen while on duty. That, on the face of it, was and is a great leap forward in protecting the men and women of the Tennessee Guard from terrorists of all stripes.

However, as they say, the devil is in the details. Thanks to a Tennessee blogger who wishes to remain anonymous so as to protect his source I have those details. The key points as he summarized them are:

Here are some of the restrictions:
The document you are required to sign before being allowed to carry places these additional restrictions:

The key document is the Personally Owned Weapons Policy, ver. 4, which I have embedded below. In addition, here is the link to the document that must be signed and to the announcement sent to members of the Tennessee Military Department (NG and ANG).

Maj. Gen. Max Haston, Tennessee’s Adjutant General, gets it. He issued orders today that will allow members of the Tennessee National Guard and Air National Guard to carry while on duty at State armories and facilities if they have a valid Tennessee carry permit. He also announced the selected Guard personnel working at Federal facilities will draw and carry Federally issued firearms for protection. Finally, he has moved Army National Guard recruiters from storefront locations to local armories.

The relevant parts of the news release:

Haston’s decision follows Governor Bill Haslam’s directive, issued earlier this month in the
aftermath of the deadly shootings in Chattanooga, to review current Guard personnel who are
authorized to be armed in the performance of their duties, and identify and arm Guardsmen
where necessary to protect themselves, citizens and Guard facilities.

“We have been very deliberate in making the decision to arm our Tennessee National Guard,”
said Haston. “This is not a step that we take lightly, but it is apparent that military personnel
have been targeted and the protection of our Soldiers and Airmen is of utmost importance.
Physical security and risk assessment is something that we continually do as part of our day to
day obligations.”

I would hope to see this spread to more states. In the meantime, kudos to Gen. Haston for taking the necessary steps to protect the men and women under his command.

Jeff Reh is the general counsel and vice-GM of Beretta USA as well as a member of their Board of Directors. In addition, he is the President of their Stoeger subsidiary. In the speech below, he explains why Beretta chose Gallatin, Tennesse as the location for their expansion.

Beretta probably would have expanded at or near their Accokeek, Maryland plant if that state hadn’t passed their onerous gun control laws in May 2013. Gov. Martin O’Malley and the gun prohibitionists in the Maryland legislature cost that state at least 300 jobs by passing the new gun control law. Moreover, I would not be surprised to see that more and more of the operations in Maryland will be transferred to Tennessee as time goes by.

As Reh notes in his speech, they only looked at states that had a consistent and strong support for the Second Amendment. While many in West Virginia are strong supporters of the Second Amendment, many of their politicians are lax in their support. It was specifically due to Joe Manchin and his push for gun control that West Virginia was crossed off the list of potential expansion locations.

The transcript of Jeff Reh’s speech:

“The Beretta family has manufactured products and done business from the same town in northern Italy for almost 500 years. This means that when Beretta chooses a location for its business, we plan not just in terms of a return on investment within the next few years. We also start with the possibility that we will be in that location for decades, if not hundreds of years, to come.

Around March 2013 the Beretta family decided to expand its manufacturing and business operations outside Maryland, where Beretta U.S.A. is located. We started our search by looking only at States that have a consistent history of support for and likelihood of future support for Second Amendment rights.

We then reduced this list of States further by looking at traditional business-related factors such as tax rates, cost of living, cost of doing business, availability of white and blue collar workers, traditions of high-level manufacturing in the area, the quality of local educational institutions, availability of job recruitment, screening and training, and so forth.

From that analysis we reduced our list of States to seven. Working through the Governor’s Office in each of those states, we came up with a list of 80 sites within those seven States that we then visited over the past five months. Based on those visits we narrowed the list of 80 sites down to six. Then we made second and third visits to those locations and reduced that list to three.

We scored each of those three locations using 20 evaluation criteria and, based on those evaluations, we unanimously chose Gallatin, Tennessee as the best of all the candidate locations we saw. Our choice was then confirmed through a personal visit by Mr. Ugo Gussalli Beretta, Franco’s father, to Gallatin on December 30, 2013.

I can say, based on this very rigorous search methodology, that not only was Tennessee the best State we found within which to locate our business, but also that Gallatin provided the best location for us within Tennessee. We thus move forward with confidence knowing that Tennessee is a great place to do business. We look forward to our opportunities here and we look forward to working side-by-side with our new Tennessee neighbors.”

Thanks to the continued hissy fit by the White House and their Democratic allies in Congress, government shutdown theater will now impact deer hunting in east Tennessee according to the Tennessee Wildlife Resources Agency.

CROSSVILLE — The Tennessee Wildlife Resources Agency has been informed by the U.S. Department of Energy (DOE) Oak Ridge Operations (ORO) that the deer hunts scheduled Oct. 19-20 have been cancelled at the Oak Ridge Wildlife Management Area.

The cancellation comes as a result of an effort to initiate an orderly shutdown in support of obtaining a safe and secure status. The cancellation, at this time, applies to the Oct. 19-20 hunts. A decision on the other hunts, scheduled in November and December, 2013, will be made as this information is received.

I guess the Department of Energy was feeling a little left out by all the attention given to the Department of the Interior’s National Park Service and wanted to get into the act as well. There is nothing like having a politicized bureaucracy when you want to stick it to the red-staters!

Seen on Interstate 81 near Blountville, Tennessee on my way home from the NRA Annual Meeting. 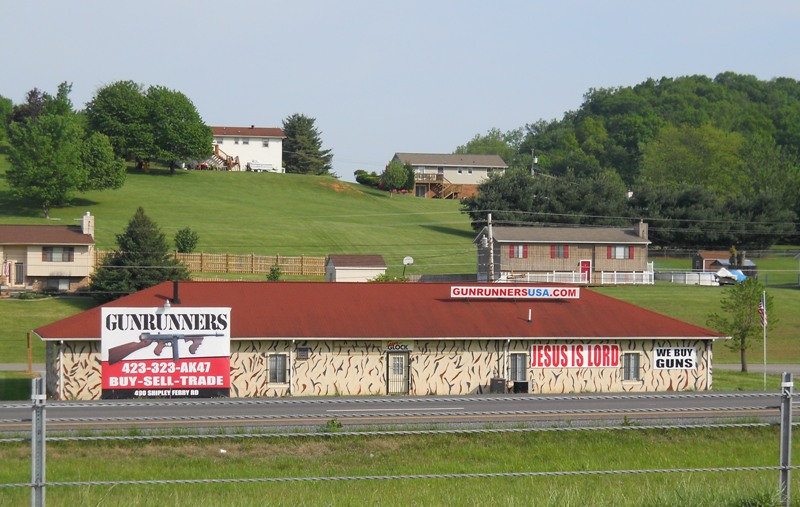