Frank J. Fleming writes for Townhall.Com and blogs at IMAO.us. His rather satirical and snarky column today is entitled “The First Term of Obama Has Been a Failure… of America.” That should give you a feel for his writings.

President Obama has done everything for you. He spent billions to create you dozens of new green jobs. He’s given you amazing new health care laws. He even wore a flag pin a couple of times, though that had to disgust him. And his poor wife has done all she can to put up with the sight of your fat children waddling around everywhere. And yet you shout and shake your fat fists at him like _he’s_ done something wrong. It reminds me of the end of that one _Twilight Zone_ episode where everyone screams when they see the beautiful woman, because they all have pig faces, and she’s different from them. Well, Obama is the delicate beauty, and you’re all the ugly, pig-faced idiots whose sight should repulse and terrify him.

Peggy Noonan is one hell of a speechwriter. While I disagree with her vehemently on occasion, she does write well. The quote of the day comes from her column in today’s Wall Street Journal discussing Mitt Romney and the Republican convention in Tampa. As noted elsewhere, the Obama Administration, in a rather tasteless gesture, (and is there any other kind from their ilk) is sending Joe Biden to Tampa during the convention.

It is good that Joe Biden is going to the Republican National Convention to hold high the flag of his party. People make fun of his gaffes, of his embarrassing verbal forays, but he’s no fool and he knows how to take it to the other guy. The speech he is working on, to be given in the heart of downtown, just across from the convention site, will be stirring and stentorian: “All free men, wherever they may live, are citizens of Tampa, and, therefore, as a free man, I take pride in the words, ‘Ich bin ein Tampon.'”

I wish that were mine. It came in the mail from a Hollywood screenwriter, one of the gifted conservatives who quietly toil there.

I wonder if Joe does poorly in Tampa will they pull his string.

Thanks to a post by Sebastian at Shall Not Be Questioned, I was alerted to the opportunity to nominate a worthy individual for the Citizen’s Medal. It is the second-highest award for civilians awarded by the United States government.

The nomination form asks why my nominee should be awarded the Citizen’s Medal. Here is what I wrote:

Mr. Nugent would be an ideal choice for the Citizen’s Medal.

He has served for many years as a national spokesperson for Drug Abuse Resistance Program (DARE) and has consistently promoted a drug-free, alcohol-free lifestyle in his lifestyle and within his industry. His industry is beset by those who are suffering from drug and alcohol addiction.

He is a strong proponent of healthy nutrition and has long promoted free-range grass-fed organic meat that is free from antibiotics as an alternative to industrially grown meat products.

Finally, Mr. Nugent is a strong civil rights advocate and is currently serving on the Board of Directors of the largest, membership-based, civil rights organization in the United States. Through his work with this organization, he has strongly promoted civil rights in those areas where oppressive governments have sought to limit a person’s freedom.

The nomination form that asks you to describe the impact of the nominee’s work.

Mr. Nugent’s service has had a profound impact on all of those with whom he has interacted but none so much as his work in field of civil rights.

By fighting for the civil rights of ordinary working Americans, he has stood up to faceless bureaucrats and oppressive state and local governments who would, given half a chance, suppress civil rights.

For this he has been vilified by the propaganda organs of these oppressive regimes and their followers. He has stood tall in the face of their calumny.

Mr. Nugent is a true American patriot who has dedicated his life, his fortune, and his sacred honor to fostering civil rights for all Americans.

If you haven’t guessed by now my nominee for President Obama’s Citizen’s Medal is none other than Theodore Anthony Nugent who is better known as Ted Nugent. The civil rights organization is the National Rifle Association.

You, too, can nominate someone for this award and I suggest Mr. Nugent is a fine candidate.The deadline for entries is April 24th. Given how Ted is being attacked by the ne’er-do-wells in the mainstream media as well as by the gun prohibitionists, I say overload them with Ted nominations.

Your guess is as good as mine what they want to be with their cute little hoodies and their no more NRA sign. 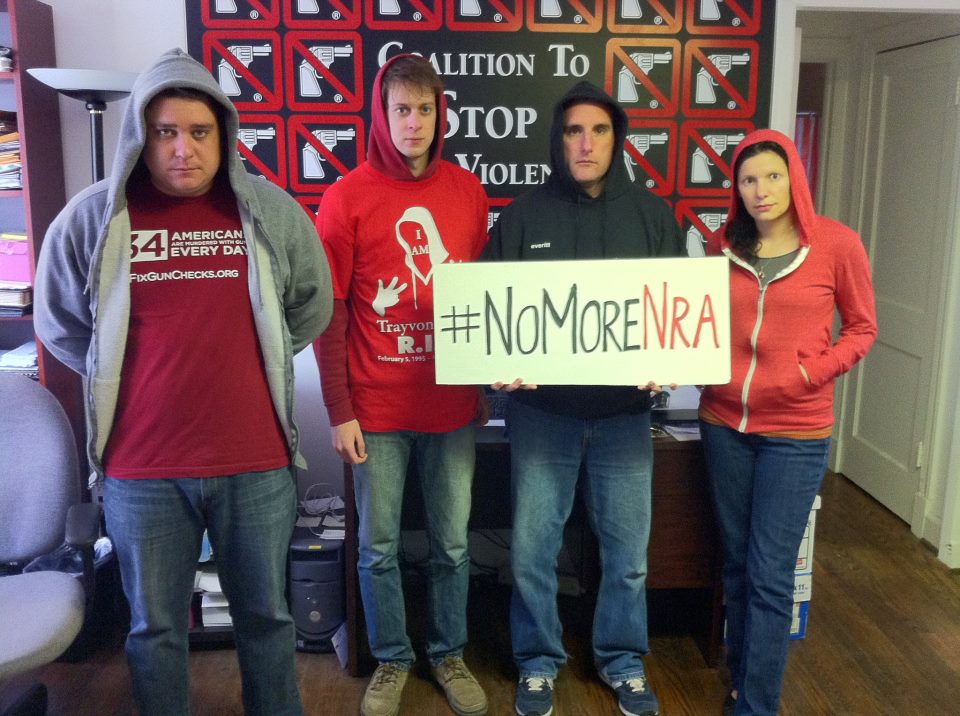 When multi-millionaire NBA stars are joining “million hoodie marches” and when you are shocked that the name “Trayvon” was not uttered in the news round-up on CBS Sunday Morning, you know the whole Zimmerman-Martin affair has jumped the shark.

Thrown into this media circus is a sage, yet snarky, comment from Tam:

I wish the media would find another ball to chase soon. I have never hoped for some random celebrity to choke on their last cookie so hard in my life. Elton John would probably do. He’d wipe the whole Zimmerman/Martin thing right off the front page, and he’s kinda past his Sell-By date, anyway. I mean, all he’s done in the last twenty years is release more re-recordings of songs about dead blondes, right? Come on, Elton, how about leaning in over the plate and taking one for the team?

I can see the epitaph now – “He was just walking down a yellow brick road listening to some crocodile rock and dreaming of being a rocket man when he was beaten by a deaf dumb and blind kid (who) sure plays a mean pinball.”

Instead of calling this the Quote of the Day, it really is snark so I’ll call it the Snark of the Day. It comes courtesy of a Tweet by Iowahawk. It combines both of the scandals du jour of the Obama Administration.

The EPA is reviewing my $1 billion bid to make solar machine guns for Mexican drug lords.

The Violence Policy Center has finally released a Tweet castigating Glock and the Second Amendment Foundation over Glock’s significant donation to SAF. The donation was announced on Thursday, August 11th. As I said at the time, I wonder what snide comment the VPC will make about it. Now we know.

Frankly, I’m surprised that that it took them this long to respond. I expected it the same day. I guess they are not only ineffectual but inept as well. Good!

The Outdoor Pressroom has a story today about decorating for the eco-conscious vegan man.

… we see items like this “green recycled cardboard” deer head, promoted as “taxidermy without the guilt.” Made for the “modern, eco-conscious vegetarian man” who wants to “use interior design to demonstrate his masculine, yet environmentally sensitive, attributes.”

The story has a link to the website GreenProphet.com which has a whole story about an Israeli company named Crembo making the cardboard deer head mounts. 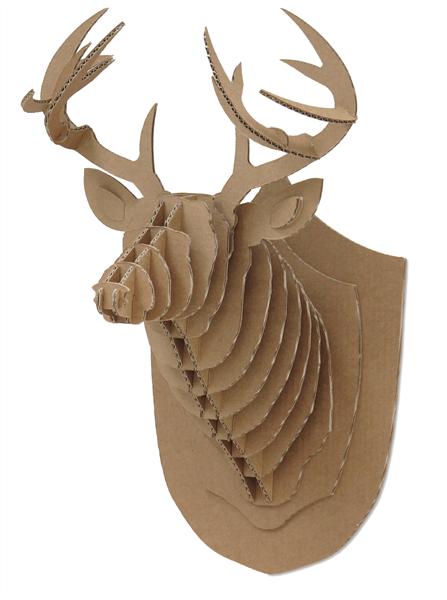 Karen Chernick, the author of the Green Prophet article, writes:

In centuries past, mounted deer (or other animal) heads were considered a type of trophy – an item that illustrated the skills and capabilities of the hunter who killed the deer. If a man had a deer head on his wall, you would assume that he was virile, manly, capable of taking care of his little woman and kids, and probably a few other things as well. But what is the modern, eco-conscious vegetarian man to do when he too wants to use interior design to demonstrate his masculine, yet environmentally sensitive, attributes? Play on the classic mounted deer head and hang a “green” cardboard version. 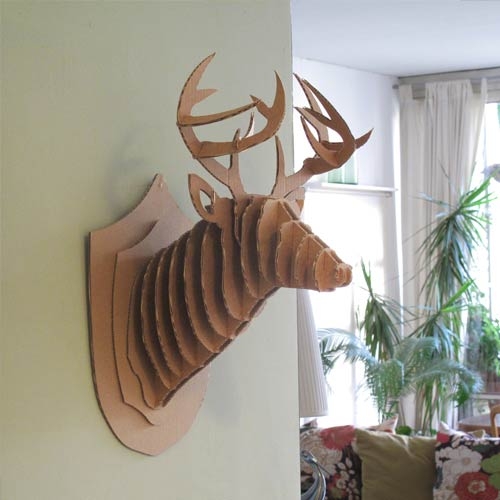 As I said in the title, I blame all those estrogens in soy milk.

As Tom Gresham has said, we must close the submarine loophole! I wonder if this is what Carolyn McCarthy means about the gun show loophole?

The full story can be found here. The sub had a crew of around six and could make the whole voyage to the U.S. submerged.

According to the study on the importation of shotguns just released by ATF, they don’t consider this event a sport and so many of the shotguns used here would not meet the sporting test of the GCA of 1968.

Compare this with Part I and think about which requires more athleticism. A bonus feature is that the competitor is using a Saiga shotgun. You know, one of those evil, no sporting purpose, shotguns.