I came across a tweet from Everytown’s favorite demanding mom this morning and the comments could just write themselves.

I spent three hours trying to learn how to knit online today. Please let me know if you have any suggested classes, videos, books, general instruction, etc. I’m not a natural. pic.twitter.com/V4Fvgrl3bA

Then there is the last sentence in her tweet: “I’m not a natural.” I think we all knew that!

Writing something with just the right amount of snarkiness is an art form. Of course, we all know that Tam is the High Priestess of this. But she may have a competitor in Dov Fischer, a lawyer and rabbi, who writes for The American Spectator.

Writing about the opinion polls that were so wrong, Fischer noted that they gave Democrats the courage to tell Americans exactly what they intended to do if elected.

In the list of things the Democrats planned to do was this:

We will end the Electoral College because it is the only college left in the country that does not have a Critical Race Theory major requirement.

Given the crap being proposed at my alma mater, I think he may be correct.

I know this is in response to the satirical website BabylonBee but it is wonderful.

Didn’t even last as long as Firefly… and there sure as shit ain’t gonna be no movie, neither!https://t.co/hlO7YuZNn5

I love snark. The tweet below is, in my opinion, world-class.

As most probably know, that Irish-American former congressman from Texas by the name of O’Rourke has decided to run for president. I’d wager that if he were forced to take an Ancestry DNA test, the only Spanish blood in his veins might have come from a survivor of the Spanish Armada that washed ashore in Ireland.

Cheer to entrepreneur and business advisor Carol Roth for giving us the proper pronunciation of O’Rourke’s first name.

People are apparently arguing about how to pronounce “Beto”.
It is pronounced: “Rob-ert”

I look at this flag and see within it the flag of a nation that oppressed my mother’s people from the Middle Ages until the first part of the 20th Century. A nation that forbid primogeniture to my mother’s people which, when combined with their callousness, led to over a million dead men, women, and children from starvation. This, while my ancestors’ homeland was a net exporter of grain and other foodstuffs. While that nation didn’t consider it a genocide, many of my mother’s people most certainly did.

It is also the flag of the nation that my father’s people fought to gain their freedom. Their independence, if you will.

My mother’s people came from County Cavan, Ireland while parts of my father’s people were in America before the Revolution.

That nation that oppressed my mother’s people and with which my father’s people fought in a revolution is of course Great Britain.

The flag to which I refer is the state flag of Hawaii which celebrates its friendship with the British with the Union Jack in its upper left corner.

If the social justice warriors are really serious about getting rid of any symbol that smacks of oppression, I demand then that they get rid of the flag of Hawaii.

It is also the flag of the state where the President was (probably, possibly, potentially) born. Given his goal to out-Nixon, Nixon, I see it doubly as a symbol of oppression.

I won’t go so far as to demand that the graves of famous Hawaiians be dug up but that flag has to go.

My Mom got an email today from the Brady Campaign. I guess at this point I should mention that she passed away almost six years ago, but I digress.

The Brady Campaign is having their very own Brady National Summit in Washington, DC in June. The announcement and details are below:

The Brady National Summit will take place June 9-10, 2014, at the Washington Marriott at Metro Center, with a cocktail reception on the evening of June 8. This year’s theme is “Bring It Home!”

The summit will feature experts, thought leaders, key advocates from across the country, and fellow Americans who have been personally impacted by gun violence. Participants will hone the skills needed to effectively engage friends, neighbors, media and elected officials in our national conversation about gun violence, and learn about what they can do in their community to help reduce gun violence.

The summit will close with a powerful day of citizen lobbying, as we join together to spread our message throughout the halls of Congress!

Join us for three days of education, inspiration & empowerment on reducing gun violence in our country.

The cost to attend this soiree is a mere $50. And more importantly, it will feature thought leaders! I guess these are the people who tell the thought police how to prosecute thoughtcrime.

And speaking of thoughtcrime, my alternative to the Brady National Summit is the NRA Annual Meeting which is free, is not in DC, and not full of Debby Downers.

Which to attend? Such a hard decision. Or not.

Screw it! I’m going to ignore the thought leaders and chance the thought police to indulge in thoughtcrime in Indy and I going to have a helluva time doing it.

I don’t always agree with Peggy Noonan, former Reagan speechwriter and current columnist for the Wall Street Journal. However, she does have a way with words.

In her column yesterday in the Wall Street Journal, part of the discussion was about the other woman in David Petraeus’ life – Paula Broadwell.  After pointing out all the attributes that Broadwell ascribed to herself including author and biographer, Noonan has this to say.

She calls herself a biographer, but biographers actually do something arduous—they write biographies.

Broadwell, for those that aren’t aware, used a ghostwriter for the book All In: The Education of General David Petraeus.  If you think about it, Paula Broadwell was nothing but a highly-rewarded research assistant while Vernon Loeb, the ghostwriter, is the actual biographer.

The constant refrain of the gun prohibitionists is that guns or standard-capacity magazines or ammunition must be banned because “its for the children”.

I came across the picture below in today’s Wall Street Journal in a book review. The Cage deals with Sri Lanka and how the country’s marginalization of their Tamil minority lead to a 26-year civil war which only ended when the Tamil Tigers were annihilated in 2009.

While I don’t approve of the tactics used by the Tamil Tigers or the official repression of the Tamils by the Sri Lankan government, it still looks to me like those kids are enjoying that see-saw. I guess you could say it is for the children, too. 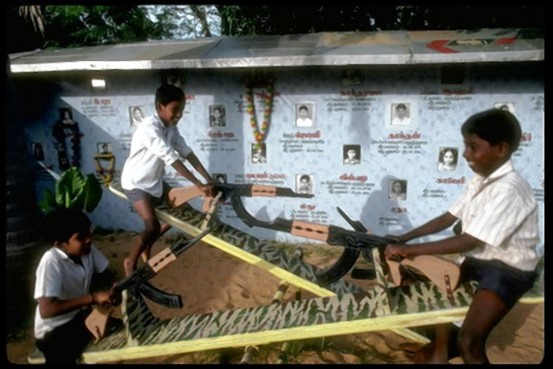 The quote of the day comes from Cemetary’s Gun Blog. After noting that The Who’s Won’t Be Fooled Again is quite appropriate for this political season, he asks this question:

But I have to wonder, since they sing about ‘fighting in the streets’, ‘shotguns singing songs’, ‘hat tipping to the revolution’, would CSGV put Pete Townshend and The Who on the insurrectionist timeline?

Given that Ladd’s musical tastes run more to America, they probably would.

Frank J. Fleming writes for Townhall.Com and blogs at IMAO.us. His rather satirical and snarky column today is entitled “The First Term of Obama Has Been a Failure… of America.” That should give you a feel for his writings.

President Obama has done everything for you. He spent billions to create you dozens of new green jobs. He’s given you amazing new health care laws. He even wore a flag pin a couple of times, though that had to disgust him. And his poor wife has done all she can to put up with the sight of your fat children waddling around everywhere. And yet you shout and shake your fat fists at him like _he’s_ done something wrong. It reminds me of the end of that one _Twilight Zone_ episode where everyone screams when they see the beautiful woman, because they all have pig faces, and she’s different from them. Well, Obama is the delicate beauty, and you’re all the ugly, pig-faced idiots whose sight should repulse and terrify him.