A replica of Scaramanga’s golden gun from the Bond movie “Man With The Golden Gun” will be auctioned by a British auction house on January 20th. Hansons Auctioneers and Valuers of Etwall, Derbyshire will be conducting the auction and expect the replica to bring £1,000 to £1,500 ($1,558 to $2,337). 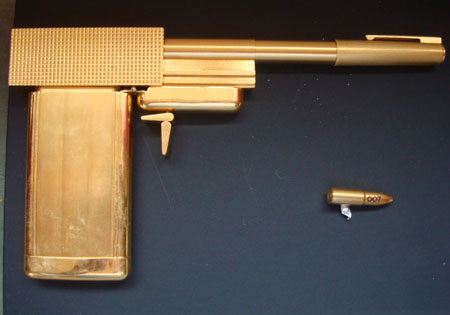 Auctioneer Charles Hanson said: ”The gun was made by SD Studios in Texas USA in the early 1980s.

”It is one of very few since with a solid gold plating, the gun had a limited market amongst the wealthy.”

It was bought by a collector from Tamworth, Staffs., in the mid-1980s but was discovered in mint condition last year in an attic.