It may be three inches long and made of plastic – but that didn’t stop a toy soldier’s gun being branded a “firearm” by zealous airport officials.

Ken Lloyd and his wife bought the “signaller crouching” figurine during a recent visit to the Royal Signals Museum at Blandford Garrison.

But when the box containing the figure passed through the scanning machine at Gatwick airport, security officials declared the tiny plastic rifle a “firearm”. 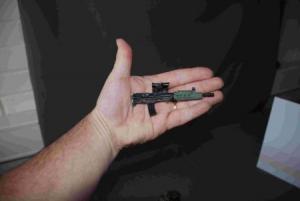 Mrs. Lloyd eventually had to ship the 3-inch toy gun home by mail. However, before she could do that, the Royal Mail insisted that it be scanned by the X-ray machine. The Lloyds did receive the figurine’s SA80 rifle about 5 days after they returned home to Canada.

If these security officials ever get tired of working in the UK, I’m sure TSA has a place just waiting for them!